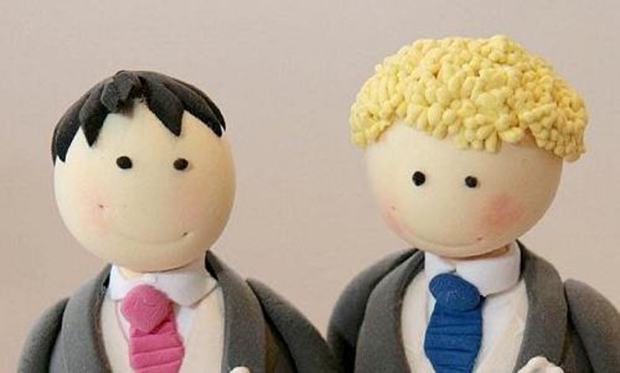 All praises be to Allah and may peace and blessings be upon His final messenger, ameen.

The agenda to legalise gay marriage has now become a huge problem. Politicians and celebrities alike are falling over themselves to be seen supporting this abomination which is promoted as the greatest civil rights issue of our time. One would have expected such a major civil rights issue to have made it into the manifestos of the three main political parties; yet a firm commitment was conspicuous by its absence in all three parties’ manifestos.

This Same Sex Marriage Bill is not aimed at changing the legislation regarding what marriage is per se, yet it is most definitely aimed at changing a universal Divine law that has been established since the creation of mankind.

The gay lobby has invested much time, effort and money in changing the public’s perception of homosexuality and has effectively created a public fear of criticism against this unnatural act with the label of ‘homophobia’. In fact, along with the help of morally degenerate people in society they have terrorised others not to speak out or show any form of objection to their agenda. It is shocking to see a Conservative government, which on one hand is seemingly adamant to “preserve British Values” and morality, then acting cowardly and accepting this fundamental change to the oldest institution known to man: the stability of the society; a stable and natural family unit.

During the recent debate about Same Sex Marriage (SSM), there has been a clear absence of the Muslim voice; this is a reflection of the fear within the Muslim community and in particular Muslim institutions to raise their concerns.  When the Church of England and the Catholic Church do not cower from questioning the absurdity of the government in its attempt to re-define marriage and when their religious leaders openly oppose this misguided agenda, they are well within their rights to question the lack of a vocal response from the Muslim community.

Yet this is more than about how we are perceived by others. Muslims have to be undeniably clear and vocal in opposing this bill. I should make it clear that any Muslims who do not do anything to oppose this bill while he or she can do something even if it is minimal, are sinful and will be questioned about this at the Day of Judgment. The Prophet, peace be upon him, was once asked by his wife, Zaynab bint Jahsh RA:

“I said, ‘O Messenger of Allah, will we be destroyed even though there are righteous people among us?’ He said, ‘Yes, if evil becomes overwhelming.’ ”

“And when We intend to destroy a city, We command its affluent but they defiantly disobey therein; so the word comes into effect upon it, and We destroy it with [complete] destruction”. [2]

Yet he is the one who said, “So why were there not among the generations before you those of enduring discrimination forbidding corruption on earth – except a few of those We saved from among them? But those who wronged pursued what luxury they were given therein, and they were criminals.  And your Lord would not have destroyed the cities unjustly while their people were reformers”. [3]

Although Muslims have to oppose this bill and the normalisation of homosexuality as “a radical and aggressive change of the organic Divine law” we need to be aware that this will have a detrimental effect on the lives of every single member of the whole society and more worryingly our children. As an example, let’s look very briefly at how the lives of children will be changed by the legalisation of SSM by looking at Canada.  Canada legalised SSM in July 2005.  Since then gay organisations have been free to promote homosexual practise in schools.  The Accepting Schools Act, an anti-bullying law, was passed in June 2012. This law requires all schools to run ‘gay-straight alliance’ clubs if the students request one.  This is a means by which homosexuality has become the ‘norm’.  School resources have also changed to reflect the new law, including tips for gay sexual activity.

Phil Lees of the Family Coalition Party of Ontario recounts from a mother who contacted him about a mock Grade 3 same-sex wedding ceremony in February 2012, in a school in Hamilton, Ontario:

We should understand undoubtedly that homosexuality and gay marriage is not about two people loving each other as it is misleadingly portrayed; it is a completely inhumane sexual activity where by one of the married males will act as a female and accept the other male to cohabit with him accordingly. A man can’t have sex with a man except when one of them is acting as a female and accepting to be penetrated by the other. A male private part cannot penetrate another male private part and the same can be said about lesbianism. It is absurd to see that the government is pursuing such an immoral agenda despite the increasing reports about the sharp decline in morality. Quoting some of these shocking reports will expand the size of this article to volumes, yet it is highly relevant to remind readers of the recent shocking news about the death of 13-year-old Chevonea Kendall-Bryan which has driven the debate on the sexualisation of young people and children to new levels. The real question is, as rightly pointed by Cole Moreton, what do we do about it? Over sexualisation is a phenomenon that needs to be tackled from various angles including countering any attempt to change the natural Divine family values known and accepted for hundreds of thousands of years.

Let us recall in the Qur’an, the story of the people of Loot:  “And (remember) Loot (Lot), when he said to his people: ‘Do you commit the worst sin such as none preceding you has committed in the ‘Aalameen (mankind and jinn)?  ‘Verily, you practise your lusts on men instead of women. Nay, but you are a people transgressing beyond bounds (by committing great sins).’  And the answer of his people was only that they said: ‘Drive them out of your town, these are indeed men who want to be pure (from sins)!’ Then We saved him and his family, except his wife; she was of those who remained behind (in the torment). And We rained down on them a rain (of stones). Then see what was the end of the Mujrimoon (criminals, polytheists and sinners)”. [4]

The prophet Loot, unlike all other prophets mentioned in the Qur’an, did not call his people to worship Allah. No definite answer can be confirmed, yet it seems and Allah knows best, that Allah wants us to focus on the gravity of the sin Loot fought against.  Again, it is needless to quote the overwhelming numerous evidences regarding the psychological, moral and health issues that result from diverting from a natural sexual life. For example, see the latest facts revealed by the Health Protection Agency (HPA) about the “Highest-ever HIV diagnoses in gay men.” [5]

Scientists have confirmed there has been a return of ‘risky’ sexual practise. Their study suggests a huge improvement in testing for and treating HIV yet they have failed to curb infections in gay and bisexual men in England and Wales.[6]

I am shocked to notice that Muslims are underestimating the danger of this law on the whole society once it is passed. It is true that the government has assured religious organisations that they will not be forced into conducting marriages against their religious beliefs, that school teachers will be able to maintain their right not to teach anything which goes against their individual beliefs but what is promised in the run up to the SSM Bill cannot be guaranteed by anyone, especially the government.

The stark reality is this law will pave the way for compulsory teaching of homosexuality in primary and secondary schools.  Some of this is already taught at present but can be rightfully challenged by parents. The SSM Act once passed will entrench aberrant behaviours as normal in the minds of our innocent children, and we as parents will have no right to remove our children from such classes. Faith schools will also not be exempt from these changes.

On Tuesday 5th February 2013, Parliament will witness a crucial point in the passage of the bill, the Second Reading. The minimum you can do is the following:
1) Contact your MP today – tell him/her how strongly you feel about the issue at a personal level, that you will follow how they vote and that you have a long memory!

2) Contact family and friends and make sure they either email or meet their MP before Tuesday 5th.
To locate the contact details of your local MP please go to the Parliament website, http://findyourmp.parliament.uk/

Muslims in the UK should attempt to participate in any capacity to show their full objection of this bill and should also be ready to take further steps in the near future.

May Allah protect us all especially our children ameen.
[donationbanner]

Sources:www.islam21c.com
Islam21c requests all the readers of this article, and others, to share it on your facebooktwitter, and other platforms to further spread our efforts.