#STAND4UYGHURS
Home / Politics / Africa / From Saviours To Refugees: The Life of Sultan Omar 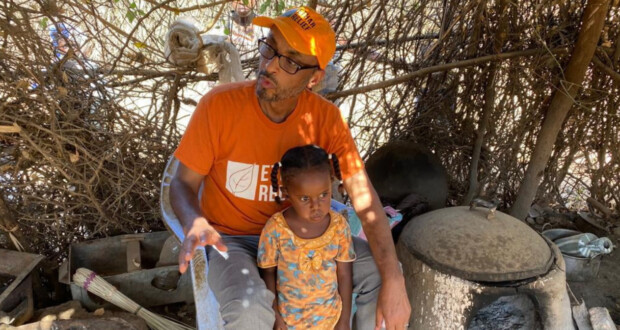 This is to be read in conjunction with our previous article entitled From Saviours to Refugees about the history of the area known as Abyssinia. The article below is a contemporary account of the struggles in this region.

Sultan Omar – the man behind an organisation

Sultan Omar is proud of his heritage. He has a sense of belonging to the ancient Kingdom of Abyssinia, which once encompassed a region far more vast than any of the modern-day countries that now lie in this geographical location. For Sultan Omar, this represents something bigger than a country, ethnicity, or nationality. It represents a time when the people of the region were not just occasionally remembered, but were well-known, revered, and turned to for support.

Today, Sultan Omar is best known as founder of Ethar Relief, one of the few international NGOs serving displaced Eritrean and East African refugees. Ethar has had an active presence for the past 15 years in East Sudan, Ethiopia, Yemen, Djibouti, and Somalia. Ethar is a mature and respected organisation in the humanitarian space. But scratch the surface, and Sultan Omar’s strong conviction and motivation—just like his wounds—are still raw and fresh. When asked about his beloved Ethar, he is effusive and passionate about the welfare of refugees. However, to truly understand the story of Ethar, we must first understand the life, history, struggles, and motivations of its founder, Sultan Omar.

Born in Eritrea in 1967 in the midst of the conflict with Ethiopia, Sultan Omar grew up in a period of brutal instability in the country’s history. The year of his birth was the first year that refugees began fleeing his homeland into neighbouring Sudan, terrified by what they witnessed in their own country. Sultan Omar considers his birth year as significant in reminding him about the struggles of those who sought asylum over the border, leaving everything and migrating towards any kind of safety. The young Sultan was not so fortunate to escape in the early years, so he grew up witnessing murder and slaughter on the streets, and the burning and pillaging of entire villages.

Sultan Omar’s early life was punctuated by hardship, loss, and mortal danger. He knew only suffering, tribulation, bloodshed, burning of homes, killing of innocent souls, and the wholesale slaughter of people like animals. This is what it meant to be born into a warzone, forgotten by the world. He has memories of only four occasions when he saw his father, before he was told that he had become an orphan. His sister, Suad, was killed in early adulthood—a bomb exploded so near to her that no trace of her could be found afterwards.

In his own words, Sultan Omar says:

“When I speak about poverty and hardship, I don’t speak about something that I have watched on video, described in words, or understood in some respect. I have lived it. For a period of time when I had not even reached the age of 13, after my father passed away, I would try and make a living selling things by taking things from the village and selling them in the city. We were surrounded by devastation. The only option was survival.”

The journey to survival

As a teenager in the early 1980s, Sultan Omar began looking for refuge in different places, knowing that he would not survive the conflict in Eritrea. Leaving Eritrea, he ventured to Djibouti, ending up in a location with other refugees for a short time. Having witnessed such horror in his youth, he was determined to consolidate his search for safety and stability. He risked life and death crossing the Red Sea on a small boat to reach Saudi Arabia. The dangers of such a journey were not lost on him; many who attempted such a journey would drown and their bodies would never be found. The boat—designed for 15 people—was packed with 40. The journey—expected to be 3 days—took a week. With food and water supplies having run out, the travellers submitted to God’s will. Eventually, and excruciatingly, they arrived on the coast of Jazan, Saudi Arabia.

After staying in Saudi Arabia for some time, Sultan Omar found that his most realistic option was to apply for official documented refugee status in Sudan, where many Eritreans were already seeking asylum. Migrating to Sudan in 1982, he stayed until he received his UN refugee passport. Always recognised as a bright student, he obtained the chance to acquire his foundational education in Sudan, then Egypt, and secondary level education in Qatar. He continued on to Norway, formally applying for Norwegian citizenship, which he acquired in 1987.

Upon his settlement in Europe, Sultan Omar was able to live a normal life, get married, and start a family. He named his daughter Suad, after his beloved sister who had died in such tragic circumstances years earlier. This daughter was his anchor—his constant reminder that there were many people left behind in the places from which he had escaped.

The making of a humanitarian

Sultan Omar has always felt bittersweet about his emancipation from a life of danger and hardship. He could never—and would never—forget his early years of suffering. He realised that he could not be comfortable and content as long as he knew that there were thousands like him without comfort and safety. He felt strongly that his liberation from the status of a refugee to a citizen afforded him a huge responsibility towards others in the same position as he had been. Moreover, he wanted better for the descendants of that great Abyssinian civilisation that offered so much to the world, including protection for refugees.

Bringing together like-minded people who had experienced similar hardships, Sultan Omar decided to embark upon an incredible mission. He established Ethar Relief with a simple aim: to make a difference to people’s lives and uplift those in need, starting with the refugees who had been completely forgotten by the entire world.

In his own words:

“When I speak about orphans, I don’t speak about the stories of orphans that I have watched on videos or heard about. I have experienced and lived what it means to be an orphan. I lost my father at a young age, and in reality, I know the true meaning of the word orphan. I know the danger and loss of being a child without safety and protection.”

Deep into the night of a cold February evening in Ethar’s headquarters, in an office space that has been hastily converted into a makeshift recording studio, Sultan Omar is recording video messages, aided by volunteers and core staff members. This is an important aspect of Sultan Omar’s leadership: his interaction with, and availability to, every stakeholder at all times. His phone often chimes with enquiries and requests directly from refugees themselves. Unusually for a figurehead, nothing is above his direct attention and care.

In the video recordings, Sultan’s passion and commitment shows. There is a pause as eyes are dried, but the stories he tells are not his—he would much rather use his time to highlight the plight of others. In fact, this article represents a rare occasion when Sultan Omar has agreed to speak in any detail about himself. His focus is on refugees, their difficulties, and the projects he and his team are running to make the lives of vulnerable and needy people better. His only aim? To gain more and more support for them.

Support the forgotten refugees of East Africa and Yemen by contributing to the ‘Saviours’ fund. To find out more, visit their website or call +44 121 309 0230 to discuss what your sponsorship pays for.

Ethar Relief a UK-registered charity established to help refugees, as well as displaced and disadvantaged people in the Horn of Africa region. It was set up by former refugees from Eritrea who survived the harshest conditions in the refugee camps of East Sudan. Ethar wants to end the suffering that it knows exists in these places.

In addition to providing aid and a comprehensive programme of development projects, Ethar Relief strives to raise awareness of refugees in the region, who are considered to have been forgotten by the international community. The UN Refugee Agency states that international aid for the vast number of refugees that flee conflict in the region is inadequate, and much more needs to be done to avert the ongoing humanitarian crises in East Africa and Yemen.

Previous: Jamal Khashoggi: US intelligence report expected to hold MBS responsible for murder of outspoken journalist
Next: One God Many Names | Al-Qarīb (The Near)