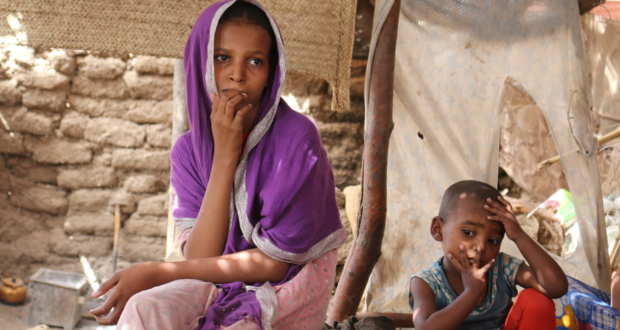 The forgotten refugees of East Sudan and Yemen suffer from many different types of burdens: hunger, thirst, illness, exploitation, danger – the list of challenges they face in their environment provokes shock and misery in the reader. Daily, they witness horrors that would break even the most hardened of spirits. Every refugee in the camps has a story to tell, and each one of them battles the odds to survive – but very few face the difficulties of a refugee child without parents.

The plight of orphan children

Orphans, and other categories of unaccompanied children, are among the most vulnerable groups in refugee camps. Ethar Relief meets many such children every year when distributing aid or setting up projects, and every time we go to the camps, their numbers have increased.[i] The reasons behind them becoming orphans are numerous. Some lost parents and siblings to the frequent and devastating sweeps of disease and natural disasters, some were kidnapped and subsequently escaped, while others were trafficked or sent alone into the unknown by their parents to give them the slimmest chance of fleeing conflict. There are even those who simply don’t know, being too young even to recall a time when they had a family, or a story of how they ended up in the most inhospitable environment for a child.

Refugee camps are not pleasant places at the best of times. Access to necessities such as shelter, water, food and medicine are difficult and often non-existent. People die from the least troubling ailments, from hunger or exposure to the elements. Most of these factors would be easily preventable if there were more provisions or better access. Still, in such a poor area of the world, it requires external sponsorship and investment to create these facilities and infrastructure (such as the mega-wells built by Ethar Relief). Even where sparse resources are available, the rule of ‘survival of the fittest’ often plays out – everyone is desperately in need and has family members relying on them. If you are not strong enough to ‘fight’ for access to the resource, or cannot travel the vast distances to get a chance to receive them, you are likely to miss out.

Meeting an orphan surviving in the refugee camp environment is a unique and humbling experience. Many exhibit a bright and confident exterior and are bullish about their prospects and future. But behind most of these brave faces lies a deep sadness and vulnerability; a shield built on mistrust, betrayal, and constant vigilance. To survive as a child in a camp wears down even the brightest spirits. The children we meet have never experienced the normality of childhood, or what it means to play, create, have fun and be carefree.

The UN Refugee Agency (UNHCR) recognises East Sudan as a melting pot of refugee crises. Refugees have traditionally fled here from Eritrea, Somalia, Djibouti, and more recently, Yemen.[ii] Despite being one of the poorest regions of the world, East Sudan is relatively stable compared to the extremely volatile humanitarian crisis areas and conflict zones which surround it in the Horn of Africa. A steep growth in the orphan population is one of the most concerning developments within the camps, and recently official statistics showed that the number of unaccompanied children in the refugee camps has increased by 173%.[iii]

Ethar Relief would like to remind readers of Islam21c, and the wider Muslim Ummah. To recall that the people of Eritrea and East Sudan are descendants of the Abyssinians, who gave shelter to the persecuted Sahabah at a time when, across the short stretch of sea to the Arabian peninsula, the early Muslim Ummah was under existential threat. We love and revere the Sahabah such as Bilal (RA) and Sumayyah (RA), who hailed from this great and respected region within Islamic tradition. Likewise, the people of Yemen have been explicitly mentioned by the Prophet (SAW).

The suffering experienced by the people of these regions should be felt by us all. We should not be proud to ignore the plight of the grandchildren of some of our greatest Sahabah, and it is not right to neglect the most vulnerable in the most forgotten places.

We met Fatimah in a refugee camp when she was 10 years old, looking after her 7 year old younger sister and other children. Two years earlier, they had lost their father to disease, and their lives had subsequently changed completely. In the camp environment, a father is considered the primary source of protection for a young girl, and is often the only barrier to exploitation, trafficking and abuse. Fatimah quietly admitted that if her father were alive a lot of “problems would be easier”. Even talking about the specific horrors that children are exposed to in the refugee camp was difficult for someone so young.

At the time, Fatimah described her ultimate wish as being “to grow up quickly” and secure a “great job” so that she could support her remaining siblings and “sponsor an orphan like me”. When asked about what her great job would be, she said she would like to work for a newspaper so that she could “tell everyone about what happens to us”. Such a clear vision was awe-inspiring to witness from someone so young in age. She mentioned that she would love to have the opportunity to study and learn, recognising that these were prerequisites to achieving these dreams and aspirations. Time and again, she reiterated her desire to support other orphans.

Fatimah was a pillar of strength despite her traumatic early experiences – but when talking about her father and his passing, the emotion overcame her. She described him not coming home one day, and how a distant relative who also lived in the refugee camp had helped her to look in hospitals located at various distances until he was found in one of them, already dead. He was only a young man, but refugee camp life is dangerous for a multitude of reasons. She had a parting message for us: “Tell those children who still have parents, that they are the most precious thing. No matter what you think, your parents always act out of care and love for you. I ask everyone to respect their parents and enjoy them while they are with you.”

Fatimah’s words spoke of a maturity beyond her years. Over the subsequent period, Ethar Relief was able to enrol her onto its Orphan Sponsorship programme and monitor her progress. With the support of her sponsor, she was able to attend school and gain her basic qualifications, without worrying about providing for her younger siblings. She went on to win an internship in a nearby city, Kassala, and now, aged 17, is working towards becoming a journalist. It’s a tribute to her hard work and determination to overcome such a terrible start to life, and it’s a huge vindication for her sponsor to be able to facilitate such an achievement.

We must be aware that the lives of refugees are complex, and they often belong to long-established communities, with many similarities to our own. Many refugees have been consigned to camps for generations; they are born in the camps and die there. They have families, friends, aspirations, and ambitions to leave the hostile environment and lead healthy, normal, dignified lives. They want to work, provide and care for their families and communities, and do not crave sympathy or aid. They simply wish for dignity, opportunity, and recognition of their challenges. More than anything, they want us to know about their plight and raise awareness of the underlying conditions that lead to them becoming refugees.

Become a sponsor of an orphan refugee through Ethar Relief’s Orphan Sponsorship programme. To find out more click here or call +44 121 309 0230 to speak about what your sponsorship pays for.

Previous: Quranic Community #9 | Do you believe everything you are told?
Next: Condolences upon the passing of Yousuf Deedat, son of the late Ahmed Deedat