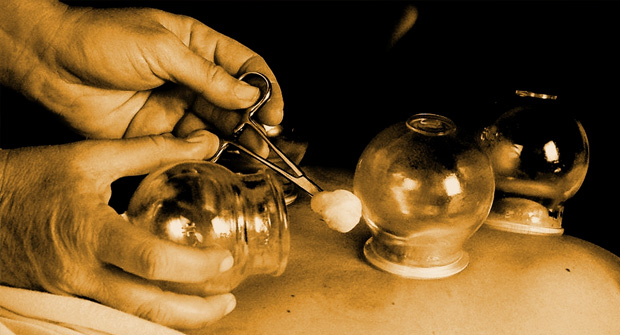 Introduction
Allah the Most High stated in surah An-Najm:

And he does not speak of his own desire. It is but an inspiration inspired. Taught to him by the firm and powerful1

and in surah Al-Hashr, The Almighty says,

And whatsoever the messenger brings forth to you, then accept it, and whatever he keeps from you, then abstain from it! And Fear Allah, he is firm in judgement2

From the above translation of the verses, we have established that anything attributed to the Prophet (peace and blessings be upon him) which is known to be correct, we must accept it as part of Islam and the Sunnah. The Prophet Mohammed (peace and blessings be upon him) said “There is not a single disease for which there is not a cure”, and we all know that there is no cure for death. One of the many remedies the Blessed Prophet informed us about was that of Al-Hijamah or Cupping Therapy as it known in the west. There are numerous ahadith concerning Al-Hijamah; many are considered sahih (authentic) whereas the authenticity of some has been questioned by scholars such as shaikh Nasir-ud-Deen Al-Albani and shaikh Abu Bakr Al-Jaza’iri. However, what is accepted unanimously is that Al-Hijamah was practiced by the Prophet (saw) and he encouraged others to do so. It is also documented that he paid the cupper his wages.

So what exactly is Al-Hijamah?
Cupping is an ancient method of treatment that has been used in the treatment and cure of a broad range of conditions throughout the Eastern and Western cultures of the world. Conditions such as blood related disorders; haemophilia and hypertension for example, rheumatic conditions ranging from arthritis, sciatica, back pain and migraines through to psycho-social applications in the treatment of anxiety and general physical and mental well-being. Traditional theories advocate that the primary aim of Cupping is to extract blood that is believed to be harmful from the body which in turn rids the body of potential harm from symptoms leading to a reduction in well-being. To date there are no scientifically approved research trials anywhere in the world which investigated the impact of Cupping at a physiological level, although numerous small scale studies have been done promoting the benefits of Cupping for various diseases. In the West, the first and only published research trial to have explored the impact of Cupping at a functional level was done by a research team at Kings College, London (British Cupping Society). This research looked at the effect of Cupping on Knee Pain, the results of which are available here.

History and origins of Cupping Therapy
Traditionally, Cupping Therapy has been practiced in most cultures in one form or another. In the UK the practice of Cupping Therapy also dates back a long way with one of the leading medical journals ‘The Lancet’ being named after this practice. A lancet is a piece of surgical equipment that was traditionally utilised to release excess blood i.e. venesection and to prick boils. The Arabic name for Cupping Therapy is Al-Hijamah which means to reduce in size i.e. to return the body back to its natural state. The practice of Al-Hijamah has been part of Middle-Eastern cultural practice for thousands of years with citations dating back to the time of Hippocrates (400 BC). Of the Western world, the first to embrace Cupping Therapy were the ancient Egyptians, and the oldest recorded medical textbook, Ebers Papyrus, written in approximately 1550 BC in Egypt mentions cupping (Curtis, 2005). Cupping Therapy can be divided into two broad categories: Dry Cupping and Wet Cupping. Dry Cupping Therapy tends to be practiced more commonly in the Far-East whereas Wet Cupping is favoured in the Middle East and Eastern Europe.

Indications for Cupping Therapy
Traditionally it has been regarded as an effective treatment for a number of musculo-skeletal conditions as well as a general measure to maintain and promote well-being. Therefore Cupping Therapy is indicated for a broad spectrum of problems ranging from blood disorders, pain relief, inflammatory conditions, mental and physical relaxation, varicose veins and deep tissue massage, improvement in fertility levels to name but a few.

Contra-indications and Precautions to treatment
Cupping Therapy has no major side effects aside from minimal discomfort due to the method of application of skin cuts to the patient. In cases where the patient’s pain threshold is low, a local anaesthetic is usually administered. Also other possible minor side effects that may occur is the feeling of slight light headedness post Cupping Therapy, this is similar to the sensation one feels after having had blood taken from the doctor, as Cupping Therapy encourages blood flow to the cupped region (hyperaemia), one may therefore feel warmer and hotter as a result of vasodilatation (widening of blood vessel) taking place and slight sweating may occur. Again this can be attributed to sound scientific rationale and there is no cause for concern.

Pregnant women or menstruating women, cancer (metastatic) patients and patients with bone fractures or muscle spasms are also believed to be contra-indicated. Also, Cupping Therapy cannot be applied to a site of DVT (Deep Vein Thrombosis), where there are ulcers, arteries or places where a pulse can be felt (Chirali, 1999,).

Contrary to some claims, Cupping therapy cannot cure all diseases, and the mere fact that the Prophet (saw) utilised this treatment doesn’t promote its value to a universal cure. Indeed the Prophet (peace and blessings be upon him) informed there was ‘cure in it’ and we should thus attempt to attain maximum benefit from it, and he never said to ‘cure all illnesses from it’. Therefore it is the responsibility of the practitioner to be medically educated and well versed with the practice of al-Hijamah and the indications/contra-indications a treatment like Hijamah has. Although the practice of al-Hijamah should be advocated and the practice of the great Sunnah re-established, caution needs to be exercised against false attributions to the potential of Cupping Therapy. The Blessed Prophet warned us “He who introduces something new to Islam, which is not of it, will have it rejected’.

Summary
In summary, al-Hijaamah is an authentic tradition of the Prophet (peace be upon him) that has been used throughout history. There is volume of anecdotal literature present however few scientific trials have investigated the effect of Cupping at various levels to the health. Evidence thus far points favourably for the use of Cupping as a treatment tool for a spectrum of medical ailments.

We pray to Allah to give us the ability to apply the knowledge he has given us in the best possible manner and that we continue to seek a better understanding in order to find cures for the illnesses he tests us with.

And the best knowledge is with Allah, the Almighty.

Contact 1:
– Dr. Ahmed Younis (Principal Lecturer at St Georges Medical School, University of London)
tel: 07887874898 : He is based in Hackbridge, Wallington, London.
Contact 2:
– Mohammed Wali: 07841688810 – He also worked with me in our research, and is in fact the person who taught me the practice of Cupping Therapy from an Islamic Perspective. He is based in Tooting, South West London.