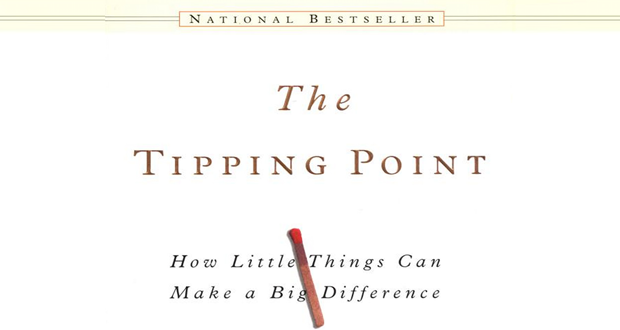 Have you ever wondered how some trends, ideas and behaviours spread exponentially? Is there a defining moment where social epidemics cross a defining point and then spread like wildfire? ‘The Tipping Point’ is a book that aims to answer those very questions.

Using anecdotes and interviews corroborated by independent psychological and sociological research, Gladwell formulates ‘The Three Rules of Epidemics’ and uses a number of case studies throughout the book to illustrate them to considerable effect. He examines how crime in New York City was reduced drastically in the 1990s; how the American War of Independence was started and how the children’s television programme, Sesame Street, became an international success.

The Three Rules are:

‘The Law of the Few’ goes into some detail in describing the roles of key players that make or break an epidemic. The roles identified are Connectors, Mavens and Salesmen. A Connector is someone who knows not just many people but different kinds of people. A Maven is someone who knows more than the average person when it comes to facts concerning newly introduced products or ideas. A Salesman is someone who introduces a new idea or product and then influences people to adopt it. Of course some people can be all three.

In the book, the chapter on ‘The Stickiness Factor’ gives examples where something seemingly innocuous caused dramatic results. The popular TV show Sesame Street, for example, began with disastrous viewing figures, which rocketed after the addition of Big Bird, who made all the difference. An advertising firm won the whole account of a client from an up and coming competition by simply putting a gold box in its advertisements even though the latter had prime time TV slots for theirs.

The ‘Power of Context’ is illustrated by crime reduction in New York where by solving petty crime, the bigger crimes were solved or prevented. Reference is also made to religious movements where the question is posed of how religious movements are started. John Wesley, the founder of the Christian Methodist movement in the late eighteenth and early nineteenth centuries, created a community of 90,000 followers in the UK and North America over a short space of time. He achieved this by travelling to various communities giving large open-air sermons and not content with mere preaching, he stayed long enough in each town to create religious communities. He realised that in order to change people’s belief and behaviour in a fundamental way, you need to create groups of people which would allow the practice and nurture of the new understanding. Perhaps the most startling inference made it that people’s behaviour is more influenced by their context than it is by their “nature”.

At this point I hope the same light bulb is appearing over your head as it did mine having read the book. It seems clear that the ideas described in this book can be used in promoting Islam to non-Muslims as well as creating positive Muslim communities in the West and in the wider international context. These ideas can also be used to help promote Islamic values in a positive way as part of the battle for hearts and minds in the media.

The crime reduction in New York is worthwhile studying from an Islamic point of view. There is also a section in the book that discusses how to stop negative epidemics such as suicide and smoking using the insights gained in earlier parts of the book. The question is how can we Muslims use the results of that experience to enjoin Good and forbid Evil in the societies we live in?

I thoroughly recommend this book to all those who are involved in the spread of orthodox Islamic thoughts and practices as it shows an entirely different way of looking at the world. The subtitle of the book says it all: “How Little Things Can Make a Big Difference”. Read the book and you will be fascinated by its conclusions – it may even make you realise your own inner potential, perhaps you are more influential than you think. Of course, this ties in with the Islamic understanding of leadership whereby we all have a part to play in the revival and development of the ummah. So find out who you are, be it a Connector, Maven or a Salesman.