Ashley Madison and the Commercialisation of Adultery 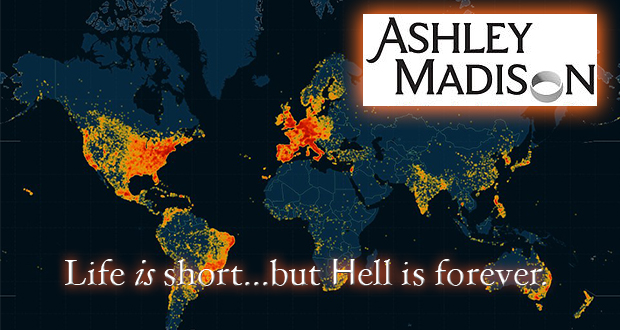 World wide distribution of Ashley Madison users and male to female ratio (red: more than 85% of the users are men in that city).

Six days after hackers exposed the client database of Ashley Madison, John Gibson, a Pastor and father of two, committed suicide. His body was found by his wife, and in his suicide note, he cited his shame at being a user of the Ashley Madison website. There have been claims of more suicides linked to the hacking and even attempts at extortion by criminals. Perhaps predictably, there has been a surge of married couples accessing the data dumps on the dark web to check if their partner has been unfaithful. So what is Ashley Madison and how does it work? And more importantly, what does it say about our society when such a service can flourish?

Ashley Madison is effectively a sexual liaison service that uses the social networking model to facilitate adultery for married people. Its iconic slogan is ‘Life is short so have an affair.’ It has a staggering 37 million users across 47 countries and prior to the data dump, the company was valued at £670million. A user simply logs on and makes a payment, filling out their personal details and sordid sexual preferences, and they are instantly contacted by other would-be adulterers. Users can chat online, leave feedback on each other, and are advised by the company on discretion during an affair and how to cover your tracks.

Adultery in Islām is from the most grievous of sins. It demolishes the essential building block of every society which is the family unit. It undermines trust between the closest of family members, with husband and wife unfaithful to each other, and children mistaken or unsure of their identity. And it is instinctively repulsive to the pure natural disposition of a human being that cherishes loyalty and faithfulness.[1] Ashley Madison, and others like it, represent the ultimate depravity of unrestricted commercialisation in seeking to promote, facilitate and monetise adultery. And we have to question, as a society, how we reached such levels of moral depravity that such destructive ventures are allowed, encouraged and have millions of subscribers.

Islam21c will be hosting several key panel discussions at the 3 day residential Family Conference event in December analysing in detail some of the worst social ills present in the Muslim society today. To find out more click here

The sharīʿah does not leave the sanctity of marriage to be flagrantly defied by perverted individuals or unscrupulous companies. The Qur’ān describes marriage as a ‘solemn covenant’,[2] and from the early stages of a marriage proposal the sharīʿah seeks to protect and preserve the integrity of a marriage. When a man is seeking a woman’s hand in marriage it is prohibited for another man to interject with his own proposal. For the marriage to actually take place the approval of the guardian of the woman is a condition which ensures that her interests are protected, and that there is a visible transfer in guardianship from the father to the husband. The consent of both partners is required and the dowry (mahr) must be given from the man to the woman as a symbol of the husband’s commitment to provide for and look after his wife. The institution of hijāb continues during the marriage, as it was before the marriage: the hijāb is primarily a barrier, hence free mixing with strangers of the opposite sex is frowned upon for both men and women and seclusion between an individual man and woman is strictly prohibited. A dress code exists for both men and women with the area of covering for women being greater than that for men. The Hijāb is not merely a scarf that the Muslim woman covers her hair with, but an honourable conduct which is maintained between both genders at all times amplifying their mutual dignity and respect.

Adultery in the sharīʿah is treated as a crime with a severe punishment but the burden of proof is exceptionally high, almost beyond the pale of reality, requiring four just witnesses who observed the actual act. The result is a perfect balance between a strong and shocking deterrent and a compassionate leniency that allows the sinful to conceal their sin, repent and reform their lives. Salacious rumours about the faithfulness of either partner in a marriage are strictly prohibited and unfounded accusations which fail to produce four material witnesses carry severe retribution in the penal code. Even exit from the ‘solemn covenant’ of marriage in the form of divorce requires conditions to be fulfilled which, at each stage, from the pronouncement of divorce to the waiting period (iddah), to the actual dissolution of the marriage protect the rights of both man and woman. The result is that marriage in the sharīʿah is a strong, fortified institution that is the foundation for a happy and prosperous society.

That is not to say that marriage problems and even infidelity do not exist in the Muslim community, quite the contrary. The UK Islamic Shariah Council is inundated with complex marriage disputes that mirror the social ills of our wider society. But like all other aspects of the sharīʿah, the extent to which problems exist in the Muslim community are only a reflection of the extent to which Muslims adhere to the guidance which they claim to adhere to.

Many observers would have felt that the hacking and data dump was rough justice for cheating partners. They sought to ‘liven up’ their dull and uneventful lives with a sordid affair and their exposure in public is exactly what they deserve. This attitude when expressed by Muslims shows a lack of understanding of the nuances of the sharīʿah and how it deals with the subject of societal relations and sexual immorality. Publicising adultery, whether the accusation is unfounded or not, normalises this flagrant violation of the sanctity of Allāh’s covenant, and encourages its proliferation. It is noticeable therefore that while Sūrah al-Nūr begins with a harsh and abrupt warning against those who commit fornication, the punishment for those who make unfounded accusations, namely failing to produce four material witnesses, is almost on par with those who commit the act itself.[3]

Many would argue that how could a man and woman commit such a shameful act in full view of four just witnesses? And that is exactly the point – the punishments in Islamic law are fundamentally deterrents and a means of purification for people who wish to make confessions beyond that of personal repentance and rectification. The penal code in Islām is to be viewed in a holistic sense having a connection to prevention of the crime in this world, but also a purification from sin in the hereafter. It is impossible to find another penal code that so vehemently protects the honour and dignity of innocent people, in particular women, who are often subjected to malicious accusations or erroneous assumptions based on circumstantial evidence, while at the same time providing an unmistakable warning to would be adulterers.

When reflecting on the whole sorry episode, a person cannot fail to notice the scale of discontentment married couples across the world must be facing in their marriage to register with such a service. But why should we be surprised? When people have already supressed their pure natural disposition which calls for devotion and worship of God and accountability in the Hereafter, little remains except to follow the destructive desires for instant gratification. When a human being has already betrayed their covenant to their Creator and Cherisher, betraying their covenant to their partner is relatively simple. And consider how discontentment is the inevitable consequence when men and women abandon the Creator’s guidance in marriage; a guidance which is so rich and detailed, and exemplified by none other than the Prophet Muḥammad (sall Allāhu ʿalayhi wa sallam) himself.

The real criminals are of the course the corporate giants that insidiously attack the institution of marriage. Their brazen mockery of marriage includes the ‘o’ in ‘Madison’ being a wedding ring and advertising posters that mock the whole concept of a bride and groom. They have purposely exaggerated the number of registered female users using artificial profiles knowing full well that the vast majority of users are men. They have misinformed the debate of whether monogamy is part of human nature, knowing full well that were it not then the solution would lie in polygamy not adultery. And, if that was not enough, they have failed to even protect the personal data of their users with hackers dumping some 35GB of personal information including first and last names, emails, credit card details, and addresses, exposing millions of people to identify fraud and extortion. And what is the consequence for companies that profiteer from promoting promiscuity and destroying families – the simple resignation of a CEO. A man who is probably a multi-millionaire and now will have the time to enjoy his spoils, for a short while.

There is no doubt that one of the major fault lines between secular liberal societies and the sharīʿah is sexual morality. Diametrically opposed perspectives exist on sexual freedom, the role of men and women, dress code, segregation, the sanctity of marriage, the philosophy of the penal code and, above all, fundamental recognition of God and the Hereafter and the right of the Creator to legislate in our lives. The Ashley Madison scandal shines a spotlight on the devastating consequences of sexual immorality and unrestricted commercialism. In the tragic case of John Gibson, his wife Christi said, ‘What we know about him is that he poured his life into other people, and he offered grace and mercy and forgiveness to everyone else, but somehow he couldn’t extend that to himself.’ It is ironic that she used the words ‘mercy’ and ‘forgiveness’ which are some of the most often repeated words in the Qur’ān. In Islām, the door to repentance and forgiveness is never closed, regardless of the contempt with which the sin is held. Allāh said in the Qur’ān:

Say, “O My servants who have transgressed against themselves, do not despair of the mercy of Allāh. Indeed, Allāh forgives all sins. Indeed, it is He who is the Forgiving, the Merciful.”[4]