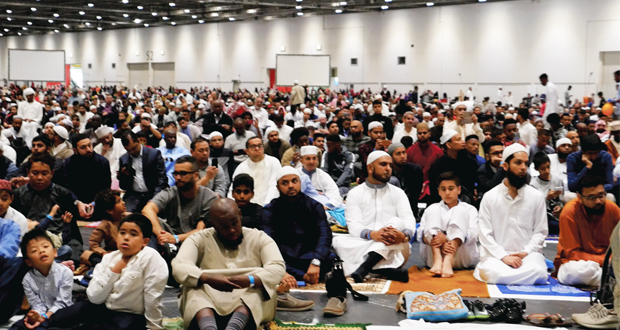 Excel, London on Sunday June 25th for Eid al-Fitr was life changing for me. I’ve never been in such a calm and spiritual environment where I felt safe and at peace. Praying alongside 30,000+ Muslims felt surreal because, although they were strangers, I felt united with them – like we were family. I would like to share with you my own and my family’s experience of the special day.

We were making a concerted effort to make Eid morning special this year as my little brother, who is three years old, had been speaking for a while about how fun Easter was due to the celebrations at his school. We wanted to make Eid special for him, so we bought him the toy that he had been making duʿā’ to Allāh for the whole of Ramaḍān and covered the house in balloons to let him know it was a special day. He woke up with the biggest smile.

The joyous day ahead started with a busy morning with so many families zooming out of their homes bright and early, all dressed up, and struggling to find parking because of early reservations. The place was packed with happy faces. The doors opened at 8am with even more crowds of people joining in at 10 am to attend the Eid prayer which was led by special international guest Mufti Ismail Menk. When lining up in the queue for security checks, both my mother and sister agreed that fasting in the month of Ramaḍān has been hard this year due to the immense heat, studying for exams whilst working and making time to prepare and cook meals for the whole family. But everyone was in good spirits and excited to celebrate the ending of the blessed month.

I personally come from a family who is not entirely conservative in their practice of Islām and, as a rule, do not generally attend Islamic events and talks. It was extremely difficult to convince my mother and father to come to “Eid in Excel”.  My mother is in her mid-40’s and this was her first ever Eid Salah. Along with my parents, my 4 aunts and uncles also came with their families. For most, it was their first ever Eid Salah. For many years, Eid has never really been anything special in my household. We wake up, eat, get dressed, take pictures and call it a day. It was nice to finally leave the house for once especially with my sisters, aunts and mother, who are always left to do the cleaning up after Eid at home. I have never seen them laugh so much without the added stress of thinking about what meal to prepare for the family.

Once the security checks were done, the day had begun with the awaited Eid Salah. That was the best part for me; there was something so overwhelmingly powerful about seeing all those people praying together in congregation that had a huge impact on the whole experience. My sister told me just how much the moment had meant to her:

‘I think the highlight of the whole day for me was praying amongst my sisters, aunts and mother. One of my sisters will be getting married soon inshāAllāh and so this Eid Salah was really the last bonding time we had together. We were all standing side by side in one strong row which no one could break. Hearing the sound of the loud takbīr and adhān made my heart race uncontrollably. I felt so empowered and blessed at the same time. I looked to my right and saw my aunt bursting into tears. She found it beautiful; it was an emotional and memorable day for us all.’

The funfair was like a mini Disney World for the children. They were running around the candy stalls with excitement in their eyes waiting for their turn to get on the rides and have a good time. My little brother is usually very shy and awkward when it comes to social gatherings. However, I’ve never seen him more sociable in my life. He was playing with balloons with other children and laughing whole heartedly when he rode his favourite tea cup ride with his little friends and cousins.  I did not have to worry about him at all because I knew the children were safe as there were a lot of volunteers and security checks around the centre. I think the funfair sealed the deal, he was glued to it; went on the rides at least 19 times. It was nearly impossible to take him away. He now associates the word fun to Eid and is counting down the days to next Eid.

Whilst the children played on the rides, I took my sisters for a stroll down the bazar area which sold a variety of different Eid gifts which were available to take home and give to family members and friends.  There were so many exclusive products on offer such as traditional Moroccan garment pieces and other handmade, specially designed clothing items and jewellery. They went delighted, and let us just say that I carried home a lot of shopping bags. The organisers of the event at Excel had also provided delicious food which you could smell as soon as you entered the building. It was absolutely scrumptious. For the main meal there were samosas, biryani, pakoras, kebabs, everything, anything, name it and it was there. There was also a long white table filled with scrumptious desserts such as salted caramel, Oreo, chocolate and red velvet cake. I was tempted to have them all but I had to control myself.

Other than the delights we experienced as a family at Excel, I feel the impact and success of this Eid event lies in a far greater matter. The reality is that most women and children are not able to leave the house during Eid in our community because of household and other responsibilities and if they do then it is back into another crowded house. Eid in Excel is key for our mothers, sisters and our children. For most families, Eid takes place in a family home where everyone gathers together and just eats and takes photos; which can be enjoyable for some but loses the religiosity of the celebration. The lectures given by well-known speakers and the Islamic environment help the youth and elders by reminding them that the whole month of worship does not stop after Eid. The lectures and electric environment created an uplifting sense of unity which definitely brought 30,000+ Muslims together on this very special day.

“Eid in Excel” was organised by Eman Channel, Sky 857.