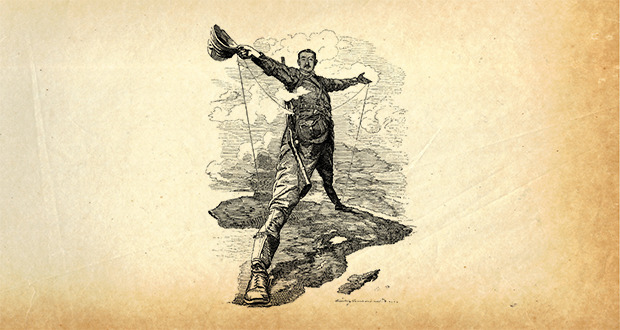 The Jewish Holocaust was indeed one of the greatest crimes committed by white “Christian” Europeans against a people of another race and religion. I say “Christian” because anyone reading the works of Hitler and the Nazi’s cannot but conclude that religious beliefs and history formed part of the propaganda and policies against Jewish people. Jews were not only targeted because of their race but also because of their religious differences, practices and history. And yet, western historians have a tendency to sanitise Christian inspired violence and colonialism from their history books.

Genocide does not happen overnight. It is a gradual process that first takes normal ideas and notions about a people and demonises them through political ideas and propaganda via journalism, media, art, literature, caricatures and cartoons too. Whilst populist movements and politicians play a role, it is the work of intelligent and articulate people (often those that consider themselves liberals, the establishment, and champions of the host society and its values) who are usually the ideologues that contribute to genocides.

There are those who believe that the Jewish Holocaust was the greatest crime committed in history, and worthy of special memory. The view promulgated by some that the suffering of Jewish people at the hands of Europeans is worthy of special memory above others is one Muslims cannot accept because it historically exclusive, and prevents us from understanding the potential in Europe for a resurrection of similar attitudes and policies towards others.

The correct approach for Muslims is not to raise the suffering of one race or people above all others because that can, in itself, be seen as a form of racism; even though for those who have been its victims they will understandably see it that way.

Muslims living in Europe need to remember all those who have been victims of genocide at the hands of European nations and, more importantly, understand how these genocides happened. We should encourage our schools and history clubs to remember all of them, not one above all others.

We may all have an opinion of which has been the worst holocaust of all time. If I had to pick one, and I don’t like too, it would be the African Holocaust. By this, I mean the enslavement of Africans in the West. Millions died in transit and millions died in the Americas. What marks this out for me is the industrialisation of crimes against humanity and slavery; the transportation of a people from one continent to another with differing climates and conditions; the sheer level of abuse, crimes and humiliation, torture and death of a people; the way they were bought and sold like animals but, above all, the length of time (400 years) in which they suffered. This was a slow and painful death of a people and their way of life.

Let us not forget that Christianity had a role to play in the justification of all these crimes by the attempt to impose Christianity and European values on the “savages”. State and missionary were one in the colonial venture. The civilising mission and notions of the superiority of the European way of life and its values are summarised in Rudyard Kipling’s “White Man’s Burden”. In it we find that the notions that underpinned these historic crimes are very much alive today in both Europe and America. We need to understand that minority communities in Europe are all connected to wider communities, linked by a common history of genocide and massacre.

Today Europeans point the finger of anti-Semitism at Muslims in an attempt to deflect from their own history and demonise Muslims. Muslims have a long history of tolerance toward Jewish people. Even in this country, our only Sheikh ul Islam of Britain, Sheikh Abdullah Quilliam, openly declared the Islamic position on Jewish persecution in Europe as early as the end of the 19th Century. Jews were welcomed to live in Muslim lands, even Palestine, under the protection of the last Ottoman Caliph.

It is true that some forms of anti-Semitism, holocaust denial, and conspiracy theories have found their way into the minds of a few Muslims. These ideas have come into our communities from some of the older European reverts to Islām who brought their previous European Christian prejudices with them and tried to give them an Islamic justification. More recently after 9/11, conspiracy theories emanating from left and right in the United States have been accepted by some Muslims.

We need to understand the sources of these anti-Jewish ideas (they are often anti -Muslim too), and firmly reject them as not being part of an Islamic approach to another people or correct reaction to oppression.

The reality is that anti-Muslim/Islām hatred and anti -Semitism have a deep and long history in Europe. Both Muslims and Jews were equally targeted for their religion as well as race. Jews, Arabs and Turks were targeted during the Crusades, the Inquisition and Colonialism. Even in the African holocaust, 30% of 22 million African slaves were Muslims, and they were systematically stripped of their religion once in the USA.

In 1903 a UK Parliamentary Commission referred to Whitechapel and Mile End as Jerusalem and Little Palestine. Today, propagandists invent conspiracy theories of Muslim attempts to take over Britain/Europe and their refusal to integrate like the Jews in the past. They use terms like Londonistan and Eurabia, Trojan horse, Entryism and the imposition of Sharia law on European cities. Concerns and language used about Jewish ghettoes have been replaced with “segregated” communities and “parallel” lives. Where once the talk was of a global Jewish world conspiracy to control the world, today it has been replaced by a global Jihadist threat to take over the Western world. Once Jews and their values and laws were portrayed as alien to Europe’s values, today it is sharia law and Muslim values. Talk of Jews being un-German has been replaced by talk of Muslims being un-British, un-French, un-German, un-European and un-American. Talk of Jewish men raping and being a threat to German women has been replaced by Muslim sex groomers. The language and imagery used for Muslims today is uncannily similar to that used in Nazi’s propaganda. To cap it all, the leader of the so called “free world” is now a man who embraces much of this rhetoric and ideology.

European anti-Semitism was often twinned with anti-Muslim attitudes. We should not forget that even in that awful place where one of the most despicable acts of history took place, the gas chambers, European perpetrators did not forget their other great hatred: Islam and Muslims. The Jew that was lifeless and prostrated on his knees on the brink of death was mockingly called a “Muselmaner”, in Buchwald camp they were called “tired Sheikhs” and in the woman’s camp Ravensbruck they were called “Muselwieber” – Muslim woman. So it was entirely predictable that the next time there were going to be concentration camps in Europe it would be Muslims in them, as indeed they were in Bosnia.

Muslims should not deny or question the Jewish Holocaust. Denial is a tradition amongst some Europeans that has found inroads into a few Muslim minds. And neither should we remember and consider the Jewish holocaust exclusively as a suffering above all others. Instead, we should understand the historical European instincts that found it difficult to accept peoples of other faiths, cultures and races and committed genocide and holocaust against them.

We need to remember and understand all these holocausts and genocides because Europe and the United States are deeply emboldened by the same ideas and policies that eventually led to these previous ones, and Islām and Muslims are the focus of them.

TAKE up the White Man’s burden –
Send forth the best ye breed –
Go bind your sons to exile
To serve your captives’ need;
To wait in heavy harness
On fluttered folk and wild –
Your new-caught sullen peoples,
Half devil and half child.

Take up the White Man’s burden –
In patience to abide
To veil the threat of terror
And check the show of pride;
By open speech and simple,
An hundred times made plain,
To seek another’s profit,
And work another’s gain.

Take up the White Man’s burden –
The savage wars of peace –
Fill full the mouth of famine
And bid the sickness cease;
And when your goal is nearest
The end for others sought,
Watch Sloth and heathen Folly
Bring all your hopes to nought.

Take up the White Man’s burden –
And reap his old reward,
The blame of those ye better,
The hate of those ye guard –
The cry of hosts ye humour
(Ah slowly !) towards the light:-
“Why brought ye us from bondage,
“Our loved Egyptian night ?”

Take up the White Man’s burden –
Ye dare not stoop to less –
Nor call too loud on Freedom
To cloak your weariness;
By all ye cry or whisper,
By all ye leave or do,
The silent sullen peoples
Shall weigh your Gods and you.

Take up the White Man’s burden –
Have done with childish days –
The lightly proffered laurel,
The easy, ungrudged praise.
Comes now, to search your manhood
Through all the thankless years,
Cold-edged with dear-bought wisdom,
The judgement of your peers.