My Jumuah at Masjid Hagia Sophia 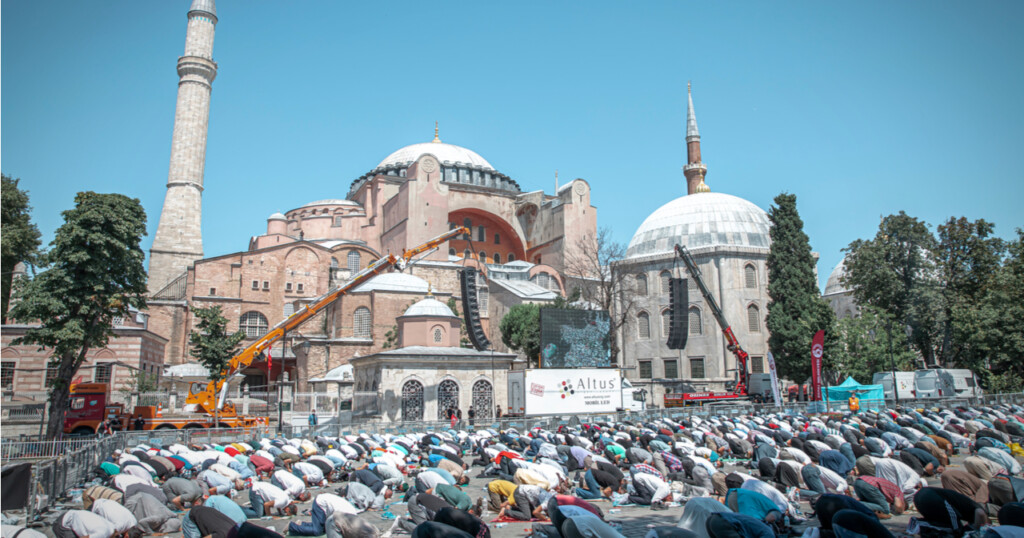 The phrase ‘once in a lifetime’ is somewhat overused for events that fade into mediocrity. Yet standing at the gates of Hagia Sophia and waiting for the first prayer there in 85 years was truly an awe-inspiring event. The monument itself is a timeless wonder that has encapsulated the cultures of ancient Greece, medieval Byzantium, the Ottoman Empire, and modern Europe. Architects, mathematicians, geometers, engineers, and artists alike have all etched their influence into its splendid domes, mosaics, murals, and minarets. The result is a monument that has withstood 14 centuries of earthquakes, riots, invasions, and wars, standing gracefully on the horizon, evoking awe and wonder. Procopius, the principal Byzantine historian of the 6th century described Hagia Sophia as “a most glorious spectacle, extraordinary to those who behold it and altogether incredible to those who are told of it. In height it rises to the very heavens and overtops the neighbouring houses like a ship anchored among them, appearing above the city which it adorns.”[1]

The prayer itself was of course the Jumu’ah prayer – the best day of the week, nestled in the best days of the year. The chosen date of 24th July was hugely significant, as it was the 97th anniversary of the Treaty of Lausanne, signed in 1923, that officially ended hostilities between the Allies and the Ottoman Empire. This prayer was not only a ritual act of worship but a bold statement to the world of the resurgence of Turkey’s Islamic heritage. The streets of Istanbul were flooded with a sea of worshippers patiently waiting for the prayer, with some having camped out since the night before. The roofs of coffee houses and shacks became makeshift prayer spaces where youngsters scrambled for a spot to pray. Wave upon wave of takbīr resounded across the old city, reaching a crescendo when President Erdoğan began his recitation of the Qur’ān. The Imam was Dr Ali Erbaş, the Head of Diyanet, the Directorate of Religious Affairs. He delivered the sermon resting on a ceremonial sword from the Ottoman era. The sermon was confident and victorious in nature, citing the great ahādīth of the conquest of Constantinople and unapologetic in raising the cause of Masjid Al-Aqsa. This was a day of celebration. This was a day of healing for the Ummah.

The protests from orthodox Christendom were to be expected, but what is clear is that the undertone of these criticisms reveal a virulent strain of anti-Turkish paranoia and racism. Ultimately, Hagia Sophia remains open to people of all faiths to visit in much the same way that the Sultanahmet Mosque across the road fulfils its dual purpose as a functioning mosque and a world heritage site. Indeed, the removal of the entry fee to Hagia Sophia should be an added incentive for tourists and worshippers alike to experience its splendour. Orthodox Christians may well ponder on the fact that it was marauding Catholic crusaders who laid the city of Istanbul to waste by plundering, murdering, and raping their Christian brethren in 1204, causing a rapid decline in the fortunes of the great city that strides two continents. They may well reflect on the words of Evliya Çelebi, the Ottoman chronicler of the 17th century who describes Hagia Sopia at the peak of its splendour and spiritual aura:

“Every night in the month of Ramazan, the two thousand lamps lighted there and the lanterns containing wax tapers perfumed with camphor pour forth streams of light upon light; and in the centre of the dome a circle of lamps represents in letters as finely formed as those of Yakut Musta’sime, that text of the Kuran: “God is the light of the heavens and of the earth.” [2]

Waiting for the prayer to start, I felt this was truly a ‘once in a lifetime’ event. An event where the savagery of 85 years of Turkish secularism finally received a blow that it is unlikely to recover from. The congregation of Pakistanis, Bangladeshis, Malaysians, and Muslims from every other nation from this Ummah surrounding me was uplifting. Each person had their own story to tell of marginalisation, structural racism, and unfulfilled hopes and dreams. Each person took away their own inspiration from this day of healing. The call to prayer will no longer resound within the walls of Hagia Sophia alone. The call to prayer will resound in the hearts of every person who witnessed this great day.