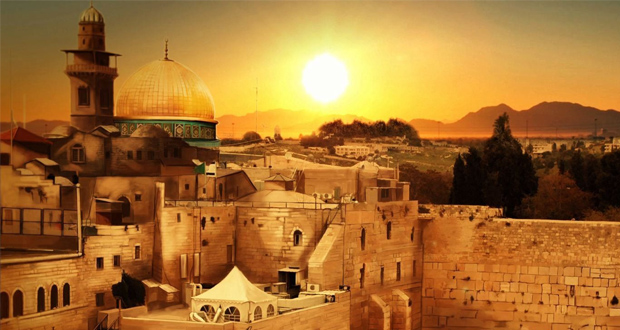 Delusional thinking with regards to Jerusalem is not a new phenomenon.

Trump’s announcement recognising Jerusalem as the capital of Israel, followed by Netanyahu’s glowing endorsement, sounds rather like the delusional thinking of the ancient Israelites who demanded Mūsā (ʿalayhi al-Salām) and His Lord to conquer Jerusalem without any faith, striving or sacrifice on their part:

They said, “O Moses, indeed we will not enter it, ever, as long as they are within it; so go, you and your Lord, and fight. Indeed, we are remaining right here.”[1]

It will take a lot more than a unilateral declaration from a reality TV star turned Commander in Chief who is being investigated by his own law enforcement agency to conquer the sacred city. An emergency meeting of the UN security council convened in New York widely condemned Trump’s decision,[2] and all 28 EU Foreign Ministers also joined the criticism.[3] It is rare to find this level of political consensus across the world in a matter of such significance.

Israel has always been and will always be nothing more than a Zionist military outpost for the US in the Middle-East masquerading as a nation state. It is an occupying force which does not recognise any of the conventions of international diplomacy. It flagrantly disregards international law and UN resolutions, and routinely engages in extra-judicial executions of Palestinian political opponents, international  journalists, and even Palestinian children in schools. A capital means nothing to such an entity, let alone demanding that capital to be the sacred city of Jerusalem.

This occupying force has no respect for the religious heritage of Jerusalem. The founding father of the Zionist movement, Theodor Herzl was a committed atheist,[4] as was the first Prime Minister David Ben-Gurion. Ironically, it was Ben Gurion who coined the phrase, ‘eternal and undivided capital of the Jewish people’, exploiting the sentiments of the Jewish diaspora, and their longing for a homeland.

The Status of Jerusalem in Judaism

In early rabbinic literature, Jerusalem has centrality in the worldly and heavenly dimensions.[5] The city is considered the embryonic source of the world: the first place created by God from which the rest of the world grew outwards. The city is often referred to as the navel of the earth, or the middle of the earth. The bare exposed piece of rock enshrined in the dome of the rock, constructed by the Muslim Caliph ʿAbdul Malik b. Marwan, is considered the base of the whole world and its very centre. Similarly, rabbinic literature describes Jerusalem as the centre from which God will renew the world at the end of times to create a new Messianic kingdom.

The Status of Jerusalem in Christianity

The sacredness of Jerusalem in Christianity revolves around Jesus, son of Mary (ʿalayhimā al-Salām). He was brought to the Temple of Solomon as a child to learn from the religious order. His mission in adulthood centred around rejuvenating the spirit of the teachings of the Torah and cleansing the temple from the traders who exploited worshippers. His mother Mary is intrinsically linked to the city with her purity, worship and devotion, and the Prophet Zakariya (ʿalayhi al-Salām) held a parallel ministry supporting the mission of Jesus (ʿalayhi al-Salām).

The Church of the Holy Sepulchre is the most sacred site in Christianity and is in the Christian quarter of the old city of Jerusalem. It marks the site of where Christians believe Jesus was crucified, buried and resurrected.

The Status of Jerusalem in Islām

Masjid al-Aqṣā in Jerusalem is the original direction of prayer for Muslims and is one of the three most sacred sites in Islām and the second place of worship built on the face of the earth. The dome of the rock is considered the place from which the Prophet Muḥammad (sall Allāhu ʿalayhi wa sallam) ascended to the heavens and ventured further than any created being has ever been, to be in the presence of God and receive the command of the five daily prayers. It is also considered the place from which the angel will blow a bugle signifying the resurrection and Day of Judgement.

Much of the recognition of the sanctity of the city in Islām revolves around reviving the legacy of the Hebrew Prophets and their original uncorrupted teachings, hence the history of Judaism and Christianity without errors and falsifications is very much the history of Islām. It is precisely for this reason that all rational, fair-minded people of the ‘Abrahamic’ faiths should be able to agree on Jerusalem, all of it, as being Muslim Palestinian land.

The Zionist claim to Jerusalem revolves around a historic claim that the sacred city has been the ‘promised land’ for the ‘chosen people’ for 3,000 years. This claim dates back to the reign of the Prophet Dāwūd (ʿalayhi al-Salām) which is considered the beginning of a golden era where the ancient Israelites defeated their enemies and united under a single Kingdom circa 1,000BCE. This great Prophet and King, Dāwūd (ʿalayhi al-Salām) succeeded in uniting the 12 tribes of Israel who were descendants of the Prophet Yaʿqūb (ʿalayhi al-Salām) and geographically constituted the northern tribes of Israel and the southern tribes of Juda and Benjamin. It is this particular tribe of Juda that became the most dominant and powerful and is considered the ethnic origin of the Prophets Dāwūd and Sulaymān (ʿalayhimā al-Salām) and a future Messiah.

The modern day term ‘Jew’ is actually derived from the name of this tribe. Interestingly enough the vast majority of modern day Jews are not originated from any of the 12 ancient tribes of Israel or the tribe of Judah. A survey of modern Jewry and the inhabitants of modern day Israel reveals that the vast majority are in fact of Turkic origin and descend from the Khazars of the Caucasus who converted to Judaism in the 8th century CE.[6]

Why is this relevant? The whole foundation of the rabbinic claim of Jerusalem being a promised land for the chosen people is predicated on these chosen people being the descendants of the Prophet Ibrāhīm (ʿalayhi al-Salām). Modern genealogy studies clearly show that the Ashkenazi Jews dominant in Israel are converts from the Caucasus who travelled into Eastern Europe, not ethnically pure descendants of Juda. Even if we were to accept the premise of the rabbinic claim, these people have absolutely no legitimate theological claim to the land of Jerusalem or wider Palestine. They are convert migrants with no ethnic connection to Jerusalem.

Jerusalem occupies a central role in the eschatology of both Judaism and Islām. Ancient rabbinic sources seem to describe a nationalistic narrative of the restoration of Israel before the end of times as the dominant nation where the Jewish diaspora are reunited in Jerusalem.[7] Even the dead bodies of devoted Jews of the past are resurrected to return to the sacred city and the gentiles are expelled. A new Jerusalem and a third Temple is constructed under the auspices of the Messiah who will be a descendent of the family of the Prophet Dāwūd (ʿalayhi al-Salām) and will spread peace and justice across the world.

The Islamic narrative of the end of times is far more universal with salvation based on faith in God and good deeds. Jerusalem becomes the locus of the struggle between the false messiah (Dajjāl) and the believers led by the Prophet Īsā (ʿalayhi al-Salām) who returns to this world as a follower of the Prophet Muḥammad (sall Allāhu ʿalayhi wa sallam) and to exonerate his own message. There is complete absence of any special privilege given to any particular ethnicity with the struggle always being between believers who have chosen the faith and disbelievers who have rejected the faith.

Mūsā’s (ʿalayhi al-Salām) final wish was to be buried ‘at a distance of a stone’s throw’[8] from the sacred city of Jerusalem. The Prophet Muḥammad (sall Allāhu ʿalayhi wa sallam) described his grave as being ‘below the red sand hill on the side of the road’. Despite holding the title of ‘Kalīmullāh’ (the one to whom Allāh spoke directly and frequently) he was never blessed with the honour of entering Jerusalem. The sins, slave mentality, and absence of trust in Allāh and willingness to sacrifice of his followers meant they were not deserving of this privilege being conferred on their nation.

This hugely symbolic fact tells us that for a nation to inherit the sacred city, the conditions of faithfulness and trust in God must be fulfilled. The ancient Israelites, despite having two of the greatest Prophets amongst their ranks, were prohibited from entering the sacred city until the corrupt generation, through 40 years of wandering in the wilderness had died out, and a new generation emerged.

Beyond the political turmoil, hostilities and wars lie two diametrically opposed, incompatible salvation histories that centre around Jerusalem. These two histories influence the attitudes and decision making of real people to this day. The Jewish salvation history is exclusively nationalistic with no place for the rest of humanity with God’s chosen people lead by the messiah occupying their rightful and ancient place at the centre of the world. The Islamic salvation history is one that revolves around the salvation of the whole of humanity through faith and good deeds. Jerusalem becomes the crucible in which the struggle between good and evil is played out and the sanctity of the city is based on restoring the legacy of all past prophets revered in Judaism, Christianity and Islām, and the establishment of universal justice.

Trump’s announcement from one perspective is an articulation of what has been the default US policy towards Israel for decades; acquiescing to the genocide and landgrab of the indigenous Palestinian peoples. But, from another perspective, this announcement is a significant turning point taking the question of Jerusalem from being a political issue, requiring a negotiated settlement, where the US and Israel clearly have the upper hand, to a religious and moral issue where the Palestinians, supported by the consensus of the Muslim populous clearly have the upper hand.

The Palestinians maybe disunited politically with Hamas and Fatah administering separately the provinces of Gaza and West Bank, but religiously the entire Palestinian population and the wider Muslim population is absolutely unified in its reverence of Masjid al-Aqsa and Jerusalem. It is unprecedented to see Muslim Heads of state, motivated by deep concern over the welfare of Masjid al-Aqsa and its worshippers, publicly denouncing Israel and the US. President Erdogan’s description of the US as a ‘partner in bloodshed’ is the strongest anti-US diplomatic language used by any Muslim Head of State for decades.[9] The Malaysian Defence Minister, Hishammuddin Hussein’s declaration that Trump’s announcement was, ‘a slap in the face for the entire Muslim world’,[10] and his readiness to deploy Malaysian Armed Forces if required is a new self-assured, confident language, not seen before in the Muslim political world.

History bears testimony to the fact that hostile occupying forces have come and gone in Jerusalem, but never lasted. The Babylonians, the ancient Greeks, the ancient Romans, the Byzantines, and the Crusaders have all exercised authority in Jerusalem without respecting the sacred sites, only to fade away and be remembered with contempt. The Israeli occupying forces will in time follow the example of its predecessors. What remains is for the wider Muslim populous to lead a grassroots revival, recognising that no nation inherits Jerusalem without fulfilling the conditions of faithfulness, trust in Allāh, unity and willingness to sacrifice.

[6] ‘The Thirteenth Tribe: The Khazar Empire and Its Heritage’, Arthur Koestler