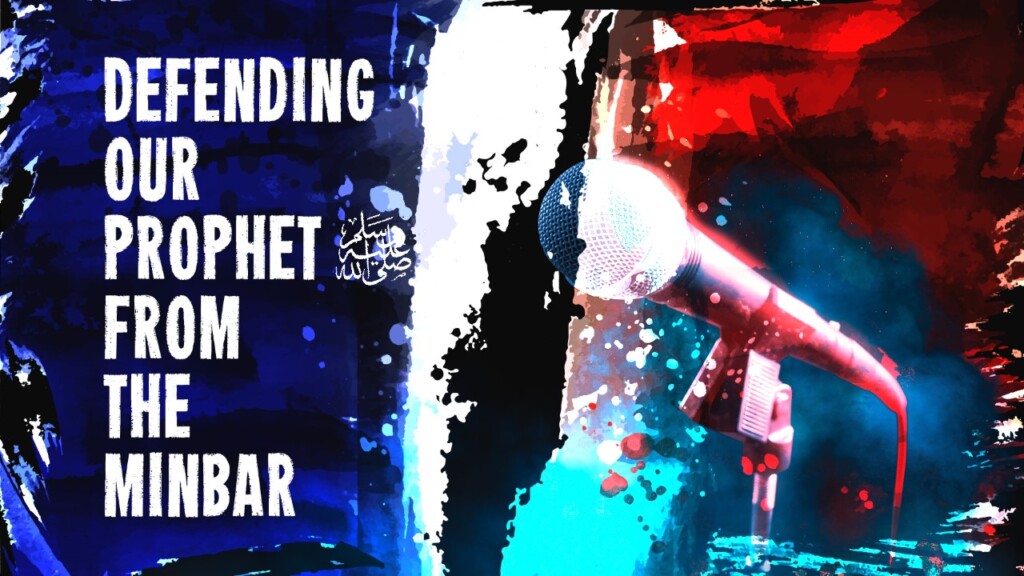 In the Name of Allāh, the most Gracious and most Merciful. All praise belongs to Allāh. May the peace and blessings of Allāh be upon His Final Messenger, Muhammad (sall Allāhu ‘alayhi wa sallam), his family and his companions.

It is important for us as Muslims to be aware of what is happening to Muslims not only locally but also around the world – both near and far. Muslims are one body, and our strength comes from our unity.

Al-Nu’man ibn Bashir reported: The Messenger of Allāh, peace and blessings be upon him, said, “The parable of the believers in their affection, mercy, and compassion for each other is that of a body. When any limb aches, the whole body reacts with sleeplessness and fever.”[1]

It is important for us as Muslims to understand why things are happening around the world. We should learn to look past the sensationalist speeches so that we can properly understand what is happening and how we need to respond.

“They plotted, and Allāh planned, but Allāh is the Best of planners.”[2]

What has been happening during the last few days and weeks in France has saddened and shocked Muslims around the world.

Yesterday, three people were killed in Nice in France. Nine days ago two sisters in hijab were knifed beneath the Eiffel Tower. Two days before that a teacher Samuel Paty, was killed in France for showing cartoons of our beloved prophet (sall Allāhu ‘alayhi wa sallam) to his pupils. None of these killings and attacks can be condoned.

Furthermore, it is unbelievable for the French president Macron to take the unfortunate murder of the teacher and use it to re-publish the demeaning and derogatory cartoons of our beloved Prophet (sall Allāhu ‘alayhi wa sallam) and to further display the cartoons on the largest buildings in France – and then to criminalise anyone who criticises this action – all in the name of freedom of expression!

Let us call this what it is. It is double standards and has nothing to do with freedom of speech! What happened to freedom of speech when the 80-year-old Maurice Sinet, a cartoonist with Charlie Hebdo for 20 years, was fired in 2009 for his anti-Semitic cartoons mocking the relationship of former French President Sarkozy’s son with a wealthy Jewish woman?

This single act of criminality of the murder of the teacher is now being used to stigmatise 10 million Muslims in France and collectively punish them. It is being used as an excuse to stoke racism and claim that Islam is in crisis! This murder was wrong, but its cause does not come from Islam and the books of fiqh. It comes from the anger of how France is treating millions of its citizens! This is not a justification – it is contextualisation!

These acts are hypocritical of France, a country that committed barbaric crimes against the nations it was occupying! In over 130 years of French occupation of Algeria, millions of people were killed – not 1 teacher, but millions – for daring to exercise their freedom! Algerian men, women, and children were slaughtered at the hands of the French colonialists.

This is part of a bigger plan to control Islam and Muslims, and it is part of Macron’s plan for re-election by appeasing the ever-growing far-right in France.

Sadly, you will be shocked to learn that the truth is: it wasn’t the murder of the teacher that began this crisis. On October 2nd 2020, two weeks before the murder of Paty, Macron announced a new set of laws “against separatisms”, which solely focused on policing and controlling Muslim communities.

The plan, announced by Macron, included:

–  Prohibition of any non-religious activities for religious organisations

–  Criminalisation of organisations that combat Islamophobia.

– 51 charities are currently being investigated, with a view to dissolving them.

– 72 schools, madrasas, and Muslim-owned businesses have been shut down already this year.

– The government wants to raid 123 Muslim homes and organisations – 56 raids have already been conducted. These have nothing to do with the killing – they are only there to “send a message”, according to the French Minister of the Interior.

The French government instrumentalised the murder of the teacher Samuel Paty for racist purposes. The government labelled two civil society organisations as “the enemy of the Republic”. The organisations were the Collective Against Islamophobia in France (CCIF) and BarakaCity.

CCIF has a special status with the UN and is a key NGO within the Organization for Security and Co-operation in Europe. CCIF is widely respected by all of its partners across Europe and helps thousands of victims a year.

BarakaCity is a humanitarian charity that helps 2 million people all over the world with poverty alleviation and clean water provision. Sadly last Tuesday, BarakaCity was forcibly closed down by the French government even though they are totally unrelated to any attacks in France!

Let us be clear: this is not about freedom of expression – this is about racism and Islamophobia!

”They took vengeance on them only because they believed in Allāh the Almighty, the Praised.”[3]

But what is the solution?

President Macron claims that ‘Islam is in crisis!’

It is in fact France that is in crisis because of French nationalism coupled with secular fundamentalism and extreme arrogance. France is a divided nation that has continued to disenfranchise its poor and minorities. France has let racism dictate how it treats its own citizens. Non-Whites live in ghettos outside of the main cities and are denied equal access to proper work and education, all in the name of secularism. France has created this fear of the ‘other!’

Did you know that since 2017: 212 Muslim owned cafes, 15 mosques, 4 schools and 13 cultural associations have all been closed! Frances Muslims have been enduring these hardships for a long time.

Secularism is in crisis. People moving away from religion, and people living far away from God – a Godless society based on following desires and not guidance. Islam is the solution to every problem for every society!

“Verily the only acceptable way of life with Allāh is Submission.”[4]

“Whoever seeks a religion other than Submission, it will not be accepted from him; and in the Hereafter, he will be among the losers.”[5]

We say to haters like Macron: ‘People come and go, and you too shall leave this earth. Nations rise and fall, and a time will come when France itself shall not exist. But rest assured, the legacy of the Prophet (sall Allāhu ‘alayhi wa sallam) and the love that all Muslims have for him shall continue to live long after you and your nation are all relegated to the ink of history books.’

It is clear from the response (and silence) from world leaders where their loyalties lie. But where do our loyalties lie? Our loyalties must lie with the Prophet (sall Allāhu ‘alayhi wa sallam)! We should feel angered and hurt by the disgusting photographs, more than if the photos were of our own parents!

But this should not lead us to do anything the Sharia does not allow! We cannot become vigilantes and take the law into our own hands. We should defend the honour of our beloved Prophet (sall Allāhu ‘alayhi wa sallam) with our words and actions. We can defend our Prophet by following his Sunnah and his way. Other actions we can do include to:

1- Recognise that this is a test from Allāh – how will we respond and behave?

4- Solidarity and unity – we are one ummah. Right now our community in France is hurting and in fear. We must stand shoulder to shoulder with them. Send messages of support to CCIF, BarakaCity and other Muslims. Let them know their brothers and sisters everywhere are with them!

5- Take heed and build unity here and now – this type of dehumanisation of Muslims can also happen in the UK. We must come together leaving aside all differences and uniting to build our strength as a community!

6- Boycott all French products. This is the very least we can do. Some people argue that it will not do any good. Macron has already asked Gulf states not to boycott French goods – because he knows it will hurt French businesses. When it begins to hurt. As a prominent Muslim scholar has already said: – after insults against the Holy Prophet (sall Allāhu ‘alayhi wa sallam) by France and its president, will we still continue buying and selling and importing French products? If a shop owner insulted our mother, we wouldn’t buy from them ever again. This is the very least we can all do to protect the honour of our beloved Prophet (sall Allāhu ‘alayhi wa sallam).

7- Call people to Islam. People are in need of this religion, the religion of Allāh. Mankind is in search for the true religion. Depression and suicide are on the rise, but Islam will establish happiness for all. The family system is broken, but Islam holds family values to be essential to a good life.

8- Raise your voice in support of Rasulullah (sall Allāhu ‘alayhi wa sallam) and against those that insult him – tonight at 7pm GMT, join a twitter storm using the hashtag #StopMacron