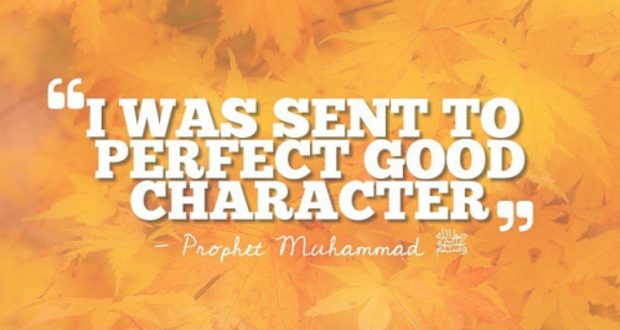 Last week, we began with an exploration of the stature and physical characteristics of the Messenger of Allāh (sall Allāhu ʿalayhi wa sallam). This week we learn of some of the qualities and virtues he was known for, inshāAllāh.

Aḥmad b. ʿAbdah al-Dabbī al-Baṣrī narrated to us, as did ʿAlī b. Ḥujr and Abū Jaʿfar Muḥammad b. al-Ḥusayn – i.e. Ibn Abī Ḥalīmah – with different wordings but the same meaning; from ʿĪsā b. Yūnus; from ʿUmar b. ʿAbdullāh the servant of Ghufrah; from Ibrāhīm b. Muḥammad – one of the sons of ʿAlī b. Abū Ṭālib (raḍiy Allāhu ʿanhu) – that when ʿAlī (raḍiy Allāhu ʿanhu) described the Messenger of Allāh (sall Allāhu ʿalayhi wa sallam) he would say,

“The Messenger of Allāh (sall Allāhu ʿalayhi wa sallam) was neither extremely tall nor extremely short; rather he was of a medium height. His hair was neither curly nor completely straight, rather in between. He did not have a very fleshy face, nor was it completely round, rather it was only slightly so. He was white skinned, having a reddish tinge. His eyes were large with jet black pupils and his lashes, long. His joints were large as was his upper back. He did not have hair all over his body but had a line of fine hair extending from his chest to his navel. When he walked, he would walk briskly as if descending a slope. When he turned, he would turn his whole body. Between his two shoulders was the Seal of Prophethood and he was the Seal of the Prophets. He had the most giving of hearts; he was the most truthful of people, the best of them in temperament, and the most sociable of them. Whoever unexpectedly saw him would be awestruck and whoever accompanied him and got to know him would love him. Those who described him would say, ‘I have never seen anyone, before him or after him, who was comparable to him.’”[2]

He did not have hair all over his body, but had a line of fine hair extending from his chest to his navel

This description also holds true for someone who has hair on parts of his body and hence does not contradict the description that he (sall Allāhu ʿalayhi wa sallam) had hair on his shins, forearms and upper chest.

When he turned, he would turn his whole body

Between his two shoulders was the Seal of Prophethood

A discussion of this follows later inshāAllāh.

He had the most giving of hearts

He had the most giving of hearts because of its righteousness and the immense good contained therein. His heart was bursting with every fine, beautiful moral and quality and goodness would pour out of it. Some of the People of Knowledge said, ‘There is no place in the entire world that contained more good than the heart of Allāh’s Messenger (sall Allāhu ʿalayhi wa sallam): all good was gathered together and put in it.’[5]

Anas reports that although the eyes of the Prophet (sall Allāhu ʿalayhi wa sallam) slept, his heart would always be awake.[6]

Another valid interpretation of this sentence is that he (sall Allāhu ʿalayhi wa sallam) had the largest heart, i.e. his heart never held back or grieved him. This is view supported by the report of Ibn Saʿd who says, ‘He was the most giving of people and the largest of heart.’

It is also said that it means that he had the best of hearts, i.e. he was free of all lowly traits and how could this be otherwise when Jibrīl cut open his heart, took out of a morsel of flesh, placed it in a golden tray, and washed it with Zamzam water.[7]

He was the most truthful of people

This was something that even his enemies testified to, and not one of his opponents could ever say that they had witnessed him lying – not even once – let alone the testimony of all his friends and followers. His enemies fought him, employing all means at their disposal, yet none of them ever accused him of lying: not a serious lie or even a minor, insignificant one. Miswarah b. Makhramah said,

‘I asked Abū Jahl, my uncle, “Uncle! Did you ever accuse Muḥammad of lying before he came with his message?” He replied, “Son of my sister, by Allāh, while he was still young, Muḥammad would be called al-Amīn (the truthful) by us. Even when his hair started turning white, he would still not lie.” I asked, “Uncle of mine! So why don’t you follow him?” He replied, “Son of my sister, we and Banū Hāshim were always competing with each other for nobility: they fed people and so we did too, they gave others drink and so we did too, they granted protection and so we did too. We’ve kept pace with each other like two race horses, then they said, ‘A Prophet has arisen from us,’ how could we possibly compete in this?”’[8]

“We know that what they say distresses you. It is not that they are calling you a liar; the wrongdoers are just denying the signs of Allāh. Messengers before you were also denied but they were steadfast in the face of the denial and injury they suffered until Our help arrived. There is no changing the Words of Allāh and news of other Messengers has come to you.”[9]

The best of them in temperament

He (sall Allāhu ʿalayhi wa sallam) was easy going, gentle and compassionate. He responded to anyone who called him, judged those who required judgement, fulfilled the need of those who asked of him – never preventing them from asking him and never letting them depart disappointed or empty-handed. When his Companions desired a matter from him, he would agree with them and follow them; if he wanted to do something, he would consult them. He (sall Allāhu ʿalayhi wa sallam) would accept the good from them and overlook their mistakes.[10]

And the most sociable of them

He would interact with those with him in the best of ways: he would never frown at them, treat them harshly or turn away from them. He would not point out slips of the tongue nor reprimand a person for any coarseness in speech or the likes, and he would make excuses for them as much as possible. Whoever mixed with him would think that he was the most beloved person to him due to the attention, kindness and sincere advice he received. There is no better way of dealing with people than this.[11]

Whoever unexpectedly saw him would be awestruck

This was due to his exceptional qualities, his heavenly sense of gravity, dignity, appearance and deluge of spirituality. Carrying oneself with an air of dignity and self-respect (mahābah) is a quality that can be confused with arrogance (kibr), yet it is the former that engenders a sense of awe. Ibn al-Qayyim explains why,

‘Dignity and self-respect arise from a heart that is filled with the glorification of Allāh, with love of Him and magnification of Him. When the heart is filled with this, it is inundated with light and tranquillity descends upon it. The person is clothed with the garments of gravity and dignity, and he inspires reverence in others. His face displays a sense of sweetness and pureness. Hearts love him and stand in awe of him; they are drawn to him and are comforted by his presence. His speech is light, his entrance is light, his leaving is light, and his actions are light. When he is quiet, a sense of dignity and gravity overcomes him; and when he speaks, he captures heart, ear and sight. As for arrogance, it arises from self-conceit and transgression, from a heart that is filled with ignorance and oppression. Servitude leaves such a person and displeasure descends upon him. When he looks at people, he looks askance; and when he walks amongst them, he struts. He deals with them as one who gives himself preference in all things rather than giving them preference. He does not begin by giving people the salām, and if he replies to a salām, he acts as if he has granted them a great favour. He does not display a cheerful face to them and his manners do not accommodate them. Allāh has protected His beloved (sall Allāhu ʿalayhi wa sallam) from all of these vile mannerisms.’[14]

Whoever accompanied him and got to know him would love him

This would occur to the point that that he became more beloved to him than his father, his child, and indeed the whole of mankind. This was because he obviously possessed all the qualities effectuating love such as perfect morals and manners, compassion and kindness and innate humility. He was a person who would captivate hearts and unite them.[15]

Those who described him would say i.e. by way of generalisation because of the inability to truly describe his beauty and perfection in detail.

“I have never seen anyone, before him or after him, who was comparable to him.”

“He would have his Companions walk in front of him, and would hurry to greet whoever he met with the salām,”

[6] Bukhārī #3570. Bukhārī #3569 also records on the authority of ʿĀʾishah that the Messenger of Allāh (sall Allāhu ʿalayhi wa sallam) said, “My eye sleeps but my heart does not.”