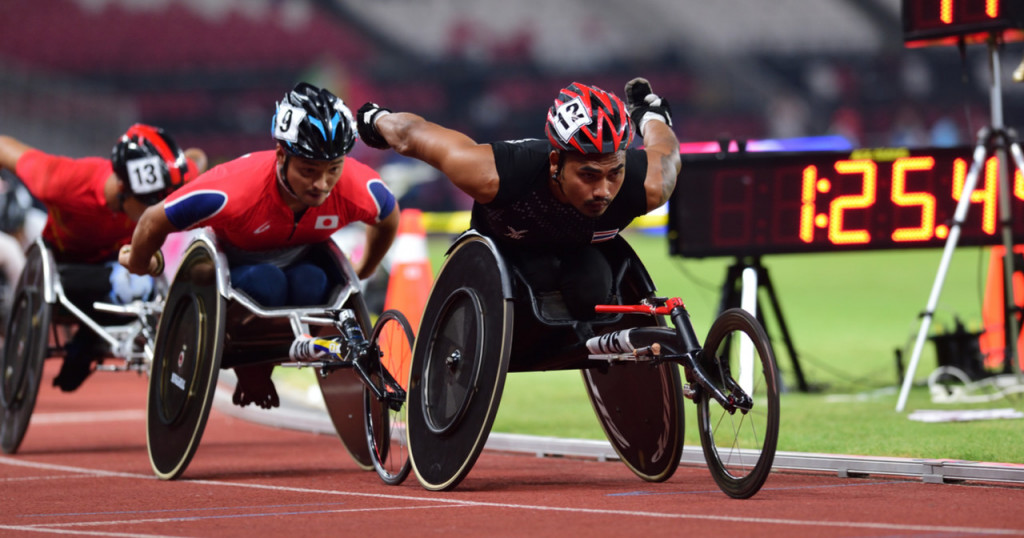 Fast forward more than 1400 years later, where the ultimate contest for sports, endurance, strength, and agility is currently underway in Japan for the impaired. The Tokyo 2020 Summer Paralympic Games (which are taking place a year later) exemplify a celebration of inclusivity, as the top athletes and sportsmen from nations around the world attend and compete for the ultimate prize. This year’s Games also provide the platform for the launch of an important international campaign:

‘WeThe15: A global human rights movement for the 1.2 billion persons with disabilities’.

The selected designation is a reference to the estimated 15 percent of the global population that suffers from some form of physical impairment. Spear-headed by a collaboration of international organisations, the aim of the campaign is to end discrimination towards the disabled on a global scale.

It is ironic that this comes at a time when the allure of the perfect body image is stronger than ever before; the tendency to attain and maintain perfection in bodily appearance is seen by many as the elusive ticket to stardom and fame. The front covers of glossy magazines are adorned with pictures of these beautiful people, the celebrities whose lives we – the imperfect masses – can only dream about. A massive industry rolls out constant information (and misinformation) about our diets, exercise, what we should wear, as well as how to present a good impression.

People often claim that image means everything. But that is not what the Prophet ﷺ practised and preached:

“Verily, Allah does not look at your appearance or wealth, but rather He looks at your heart and actions.”[1]

A man’s worth should be judged by his character, not his bank balance or good looks! As a consequence, we are all on an equal standing in front of God, and only He knows who is sincere and who is not. Allah, in His infinite mercy, provides for all of mankind, in terms of sustenance, health, wealth, and offspring. He tests each and every person individually, according to what they possess. Subsequently, they are accountable for their use or misuse of Allah’s blessings.

Common with most societies around the world, the Muslim community in Madinah had a mixed population. While it had many physically strong individuals, it also had people who were weak, deformed, and physically impaired. The Ummah is a brotherhood where all believers are considered as brothers. It ultimately follows that no one should feel left out of this collective body. Led by the example of our noble Prophet ﷺ and the righteous Caliphs, Muslims are taught to embrace diversity and develop an inclusive society. The greatest example of this principle is the congregational prayer, where believers stand side by side, regardless of their social standing or background.

Treating the impaired with absolute equality will paradoxically only exacerbate their disability and disadvantage. Rather, if their needs are to be properly addressed, they will require equal opportunities in order to succeed. The support they need to achieve this goal rests on three crucial factors. Firstly, they themselves should have the intention and conviction to progress in life. Secondly, the able-bodied in the community should be forthright in their acceptance by giving them the level of encouragement and motivation they need, while also providing resources and skills as required. Finally, and most importantly, Allah’s decree is paramount; success is only achieved through the ability that Allah gives to complete a given task, as He wills.

The aim of this new campaign is elaborately described below:

“Aligned with the UN 2030 Agenda for Sustainable Development and the Convention on the Rights of Persons with Disabilities, WeThe15 aims to change attitudes and create more opportunities by:

This is an interesting and comprehensive agenda, whereby it is hoped that all marginalised peoples, including the disabled, will be more accepted in their communities. The Muslim community could do well to heed these points for both the able-bodied and disabled among us. In particular, there is a need for greater awareness and positive representation of the faith, in order to help combat discrimination and Islamophobia.

Going back to the early generations of Muslims, there was no concept of ‘us and them’ among the believers; rather each sector of society was valued, with their welfare upheld. Upon considering the shelter that was created for the homeless in the masjid, the enhanced respect given to women, and the provision of welfare and funds for the poor, we come to the firm conclusion that the Islamic society catered for the needs of all strata.

It seems that along the way, Muslim communities have become influenced by other cultures to the extent that there still remains a sense of fear and resentment towards the disabled. With Allah’s help this attitude is being challenged, especially through sporting competitions like the Paralympics. It is through these events where we dedicate our attention to the disabled and cheer for their success, as they are our brothers.

On a recent trip to the UAE, I was intrigued by the signage in the metro, where some seats are reserved for ‘people of determination’. This attitude towards the disabled is fresh and welcoming. It makes me think: who exactly are the ‘strong’ in our communities?