#STAND4UYGHURS
Home / Featured / The Eclipse: frightening for those who reflect 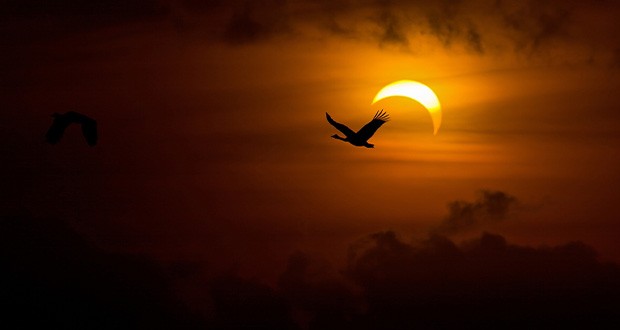 The Eclipse: frightening for those who reflect

The Eclipse: frightening those who reflect

One of the defining characteristics of the modern age is how oblivious people are to the natural phenomena and signs around them. People have become so conditioned to living in concrete jungles, submerged in a consumer lifestyle, that they have stopped marvelling at Allāh’s creation and being in awe of His Power and Might. Even those that do stop and appreciate the many natural signs in the universe, do so from a purely aesthetic point of view, enjoying the beauty and serenity to be found in Allāh’s creation, without giving due right to its Originator and Creator.

Popular science, far from deepening people’s appreciation of Allāh’s majesty in bringing into existence such a wondrous dominion, seems only to have preoccupied people’s minds with the mechanics of what, where, when and how, instead of the real question of why. The eclipse is from the signs of Allāh by which He frightens His servants. From time to time He unveils this great sign so that His servants feel in awe of His greatness, turn to Him in repentance and glorify Him in prayer.

It is from the established sunnah of the Prophet (Peace and salutations be upon him) to offer a unique two rak’ah prayer in congregation for the entire duration of the eclipse. The prayer has a prolonged standing with recitation of chapters such as sūrah al-Baqarah, which is followed by a prolonged rukū’ (bowing). After completing the rukū’ the person returns to the standing position and again recites sūrah al-Fātihah and another prolonged sūrah. After completing the second standing, the person goes back into rukū’ to complete a second rukū’ while still being in the first rak’ah. The person then goes into sujūd (prostration) as per normal but this time prolonging the sujūd as they prolonged the rukū’. There are no extra sujūd in this prayer and the second rak’ah is identical to the first with two standings and two rukū’. The prayer is completed with the normal invocations during the seating position.

You may also like: The need for guidance in an age of confusion

‘Ā’isha (Allāh be pleased with her) described the eclipse prayer led by the Prophet (Peace and Salutations be upon him):

“The eyes send their tears and the heart is saddened, but we do not say anything except that which pleases our Lord. Indeed, O Ibrāhīm, we are bereaved by your departure from us.”

With the overwhelming grief, some people suggested that the sun had eclipsed in mourning of the death of Ibrāhīm. The Prophet (Peace and Salutations be upon him) firmly dismissed these rumours and said:

“The sun and the moon do not eclipse because of the death or life of someone. When you see the eclipse, pray and invoke Allāh.”[2]

How complete and perfect is our religion! When crowds of bemused people will be lining the streets with tacky glasses straining their eyes, countless believers will be lining the mosques standing in solemn prayer behind the Imām as he recites the glorious Qur’ān. It is as if there will be a union of the natural signs in the physical environment glorifying Allāh, and the believers in the mosque glorifying Allāh.

The sun and the moon are from the greatest signs of Allāh in the physical environment around us. Each of them move in a pre-determined course set by Allāh, praising Allāh in a manner which we cannot understand, and being in service to human beings. The sun provides heat, light and the energy needed to sustain life, and the moon has a pivotal role in causing the wave patterns across the oceans, and measuring out the stages of the month. The eclipse reminds the believer who reflects, that this pre-determined course that brings life to this earth will not last forever and these two mighty signs of Allāh will be destroyed. Everything in this world is transient and must eventually die and it is the Lord of the eclipse who will resurrect human beings to answer for their deeds.

The Prophet (Peace and Salutations be upon him) understood the natural signs around him. ‘Ā’isha (Allāh be pleased with her) narrates:

“If the Prophet saw a cloud in the sky, he would walk to and fro in agitation, go out and come in, and the colour of his face would change, and if it rained, he would feel relaxed.”[3]

When she questioned him about his state he recited the verse:

“And when they saw it as a cloud approaching their valleys, they said, “This is a cloud bringing us rain!” Rather, it is that for which you were impatient: a wind, within it a painful punishment.”[4]

This verse refers to the people of ‘Ād who were great in stature and physical strength. They rejected their Prophet and even challenged him to bring the punishment of Allāh. After being afflicted with drought, Allāh sent a storm cloud to destroy them. As they stood watching and saw the cloud coming in the horizon, the tragic irony is, that they rejoiced and celebrated thinking it was bringing abundant rain. Instead it was a violent wind which utterly destroyed them. It was for this reason the Prophet’s (Peace and Salutations be upon him) face would change colour by seeing even a modest cloud. So how much more should we be filled with fear and anxiety when we see not just a cloud in the sky, but the sun and moon eclipse?

It is tragic to see people rejoice in the very signs Allāh sends to frighten them. Allāh said in the Qur’ān regarding the preservation of Pharaoh’s body:

“So today We will save you in body that you may be to those who succeed you a sign. And indeed, many among the people, of Our signs, are heedless.”[5]

The Cairo Museum today is full of tourists eager to see the mummified body of the Pharaoh. Very few ponder and reflect that here lies the greatest tyrant of all time that claimed Lordship for himself and opposed the Messenger. He was unable to escape the punishment of Allāh, and was drowned along with his armies. Instead crowds of people pay homage to the splendour of his kingdom and marvel at ancient Egypt. When his deteriorating body was flown to Paris for examination he was given full military honours fit for a king!

The Prophet (Peace and Salutations be upon him) said,

“When you see the eclipse, remember Allāh and say Takbīr, pray and give Sadaqa (charity).”[6]

The entire period of the eclipse should be spent engrossed in good deeds, with the devotion of somebody trying to prevent the punishment of Allāh from descending.

Those who cannot attend the mosques to pray in congregation can establish their own congregations in schools, colleges and workplaces or at least pray alone, and those who cannot pray for a prolonged period should pray a shorter prayer and continue with other good deeds such as remembering Allāh and giving in charity for the entire period of the eclipse.

This article was originally posted on 19th March 2015

Previous: Police seize large caches of lethal weapons and missile from far-right extremists
Next: China’s Concentration Camps: What Can We Do?