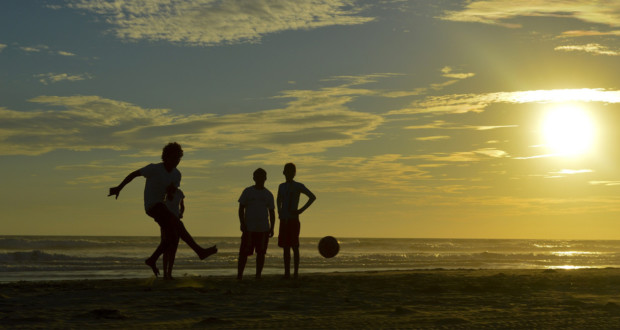 The Ugly Side of ‘the Beautiful Game’

With a fanbase of an estimated 3.5 billion compared to a world population of 7.5 billion,[1][2] football is the most popular sport in the world and its following is incredible.

The ongoing transfer sagas, the managerial movements, the various rivalries – all amplified by billion-pound marketing campaigns – makes the game largely unaffected by seasonality.  The lure throughout the year is simply irresistible.

The temptation is so great that a recent study by British snack food manufacturer, Walkers, concluded British men will watch a staggering 20,472 hours of sport in their lifetime, with football being the most popular.[3] This is an addiction.

With such astonishing figures, we must ask ourselves: ‘Is such a level of consumption healthy?’ Islām does, after all, emphasise moderation and balance in all things.

Those who dislike the sport often recycle the usual criticisms. Such condemnations include:

Such criticisms are not only completely dismissive, they also provide no grounds for a constructive conversation to be had. They will only succeed in creating annoyance and exasperation.

A more reasoned approach in exploring the unhealthy footballing addiction is to first understand the end-to-end supporter experience.

Let us consider six important angles to the addiction and supplement them with an Islamic perspective:

As noted earlier, there is a considerable amount of time dedicated to the sport. It is staggering to think the average British man will spend the equivalent of more than two years of his entire life following his favourite club.3

This use of time is not even taking the endless hours spent on video and computer games into account.

The extent to which an individual can get immersed in the game is astonishing.

The gift of time is one of the greatest blessings that Allāh can bestow upon His slaves. This blessing is not one to be taken lightly. The world-renowned Mufti Menk recently shared a tweet to highlight the dangers of wasting time:

Wasting time is worse than wasting money. Some will have more money than others. But we all have twenty-four hours in a day. No one can buy more time on earth. Remember, a wasted dollar comes back, it can be earned. But a wasted minute is gone for good. Use your time wisely.[4]

Just imagine the numerous deeds wasted in the idle use of time. A long life is highly virtuous for this very reason, it provides the opportunity to engage in additional acts of worship.

The Prophet (sallAllāhu ʿalayhi wasallam) said: “The best of people is the one who lives long and does good.”[5]

It is saddening to see many waste this gift.

With matchday tickets, broadcasting subscriptions, replica jerseys and branded merchandise on offer, clubs earn an incredible amount of revenue. In 2017, a loyal supporter can find themselves spending in the region of one thousand five hundred pounds per person following their favourite club.[6] This includes the price of tickets, food, TV subscriptions and replica jerseys – football is a billion-pound industry.

Like time, wealth is a provision and blessing from Allāh. Islām teaches us to be wise with our wealth, to give in charity and discourages wasting it.

“And give the relative his right, and [also] the poor and the traveller, and do not spend wastefully.”[7]

The lure of the game is such that it infiltrates the emotional stability of an individual. Albeit a small sample, a survey of 1,511 adults revealed the average man stays in a bad mood for up to six hours if their team loses a game.3

The saddening reality is such that many are desensitised to the suffering of the Ummah yet are emotionally vulnerable to the outcome of a football result.

With world class skills on display and roaring atmospheres, the live experience at a footballing ground can be enthralling. As entertaining as a game may be, the darker side to the experience cannot be overlooked. With roaring chanting comes vulgar language and with emphatic celebrations comes alcohol in the air. The drinking culture thrives in such environments. The initial enthralling experience can evolve into something very distasteful.

Environments where alcohol is rife and foul language is used is clearly not one that fosters Islamic values. Frequent visits can normalise the experience and can be very harmful for individuals, particularly young children.

Supporters can feel a sense of pride when pledging their allegiance to their favourite club. This pride is reinforced when feeling part of a wider supporter group and fanbase. Rivalries between opposition fans can become very intense. Light-hearted ‘banter’ can spiral from comical memes in a group chat to causing conflict and disunity. On the extreme end, we see the glamorisation of hooliganism in the youth and rivalries escalating into physical confrontations.

The nature of infatuation with football is that it leads to division. Baseless rivalries promote the opposite of what Islām endorses – that of tolerance, friendship, brotherhood, cleaning hearts and souls of hatred, resentment and grudges.

Further, the very notion of feeling a sense of ‘pride’ in supporting a football club is preposterous. It is unfortunate that a greater level of pride is felt in having an affiliation to a football club than from being a part of the planet’s greatest religion, Islām.

“Verily, we were a disgraceful people and Allāh honoured us with Islām. If we seek honour from anything besides that with which Allāh has honoured us, then Allāh will disgrace us.”[8]

A compromise on the divine Dīn is of course the most significant point but it has been mentioned last in order to set out a wider scope. It is therefore important to understand and acknowledge the preceding points.

It is also important to understand that although being involved in any of the preceding points may be discouraged and disliked from an Islamic perspective, it does not necessarily lead to an individual falling into kufr.

If one was to purposely miss prayers in preference of watching a game however, this is indisputably ḥarām. Prayer times can fluctuate in many countries depending on seasons. With footballing fixtures being dotted around the clock, there is inevitably a clash with prayer times.

It is proven that play continues during the times of prayer. This often results in players and spectators missing prayers. Undoubtedly any action that interferes with the obligatory remembrance of Allāh with no valid shar’i excuse is ḥarām.

Despite these six points focusing on the negative aspects of football, it is important to acknowledge the positive impact of the game. The various benefits, albeit relating largely to physical participation, should not be discounted. Four important benefits are noted below

Our bodies and our health is a provision from Allāh’s mercy. They have a right over us and we have a duty to maintain our health. A healthy lifestyle is not only encouraged in Islām, but the healthier and fitter individual is more beloved to Allāh.

The Prophet (sallAllāhu ʿalayhi wasallam) said “The strong believer is better and more beloved to Allāh than the weak believer, while there is good in both.”[9]

It is warming to see many sporting stars spread the positivity of Islām in the media. It is a refreshing alternative to the usual narrative. This ‘feel-good-factor’ is having a positive impact in the youth, with children starting to take pride in their identity.[10]

Mohamed Salah is the current fan favourite. His brilliance on the pitch and his character off the pitch is doing wonders on the Da’wah front. Whilst we rightly praise his skill and conduct, we must appreciate that he is only human. As with all sporting stars, the media loves to build them up to knock them down. Whether that be Mohamed Salah in football, Moeen Ali in cricket, Khabib Nurmagomedov in the UFC, or Mohammed Farah in athletics, we must appreciate that, like all humans, they make mistakes.

As noted earlier, our true pride should come from being part of the greatest Ummah and our beloved leader Prophet Muḥammad (sallAllāhu ʿalayhi wasallam), the best of mankind, is our perfect role model.

Brotherhood is in the very essence of Islām. Group activities and sports can promote unity and allow positive relationships to flourish.

Sadaqah is an act beloved to Allāh and many individuals and organisations use sport as a means to raise funds. Charity competitions are very cost-effective tools in raising significant donations that may not otherwise be possible through alternative efforts.

Having identified the negative aspects of addiction and the positive impact of the sport, let us now turn our attention to the solutions.

N.B. The summary below is not limited to football, rather to anything which takes up a disproportionate amount of our personal time away from Allāh.

To put it very simply, the rationale behind any act we engage in should be to seek Allāh’s pleasure.

Seeking His pleasure and knowing that certain actions are more beloved to Him will increase our love for those actions. We will then begin to love acts for the sake of Allāh. Secular society teaches us to love something for the sake of our Nafs (inner whims or desires). We need to break from this mould.

Once we begin to love something, we will want more and start to make sacrifices in our personal time. We will then spend our time and money in attaining Allāh’s pleasure, we will gain emotional fulfilment from acts of worship and will, God willing, never be in a position where our religion is compromised. It is of paramount importance that we acknowledge this and nurture our children with this mindset.

Conversely, if this mindset is not adopted, our hearts will have difficulty in finding enjoyment, love and fulfilment in Islām. It will inevitably be replaced by the dunyā and we will forever be slaves to our whims and desires.

Islam does not expect us to be robots. Not only does it expect us to need to relax and unwind with halāl forms of play and entertainment, but we could be rewarded if our relaxation time is intended to fulfil something that is pleasing to Allāh, whether some of the benefits mentioned above or even to unwind and recharge so that we could worship Allāh more profusely. This is the mark of a divine way of life intended for human beings to follow in the real world. Alhamdulillāh that Allāh has guided us to it out of His mercy.

We ask Allāh (subhānahu wa ta’ālā) to allow us to find love and tranquillity in His beautiful religion.

“O, Turner of the hearts, turn our hearts to Your obedience.”

[5] Narrated by Ahmad and al-Tirmidhi, 110; classed as sahih by al-Albani in Sahih al-Tirmidhi.