Why the Niqab is Religious not Cultural 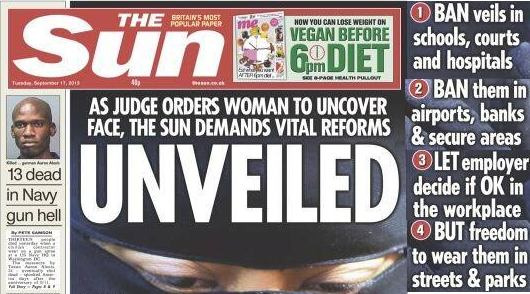 Once again, Muslims of Britain are under the microscope. This time it is the niqab, the face covering worn by many Muslim women. Calls to ban it, have a national debate about it etc are being made by non-Muslims and so called ‘progressive Muslims’ like Yasmin Alibhai Brown

Once again, Muslims of Britain are under the microscope. This time it is the niqab, the face covering worn by many Muslim women. Calls to ban it, have a national debate about it etc are being made by non-Muslims and so called ‘progressive Muslims’ like Yasmin Alibhai Brown [1]. Neither of these two groups of people have any idea why a Muslim woman wears a niqab and proceed with their tirade based on their own assumptions; preaching to Muslims about their own faith. What positive outcome they think they will get out of this; quite how this will promote community cohesion and understanding is beyond anyone. What irony! They offend Muslims, propose to limit their freedom, and yet still talk about social cohesion and freedom in the same breath. In a country where women have won the right to bar ealmost everything, we have a proposal to ban people from covering almost everything. People’s freedoms are being limited in the name of emancipating them. The newspaper that has Page 3, is campaigning for the niqab ban on page one. Male MPs want to tell women what they can’t wear; ‘progressive Muslims’ i.e. non-practising Muslims are the new Muslim theologians; and practising Muslims are the extremists.

It’s a tired and familiar old story. With hugely important events occurring around the world to report on, the media jumps on every little scrap that either makes Islam and Muslims look bad or puts pressure on them by making their way of life look more and more incompatible. It is a self-fulfilling prophecy; make your own demons and then fight to banish them. Muslims will respond by fighting the oppression and repelling the false liberators. As things stand, the Muslims are fighting for the heart of Britain, for freedom and human rights. Should they along with the sane voices in British society fail and the extreme voices in British society prevail, it will simply add to the ever increasing proof of the British establishment’s hypocrisy as, on the one hand, it seems to be taking lessons in suppression from its despotic and autocratic allies in whose lands Muslims indeed struggle for basic freedoms; and yet on the other hand it marauds around the world, hand in hand with the US in the name of freedom and democracy. Now it is simply bringing all that ugly mess home. Muslims of Britain simply need to stick to their value-rich faith. Good people will respect us for our principles, and the haters and hypocrites will continue to expose themselves plain for all to see.

Yet while we will continue to fight for a woman’s right to wear the niqab, there is growing confusion about whether Muslim women are fighting for a cultural practice or a religious one. Although this distinction should make little difference in a democratic country, it is a pertinent question for us as Muslims to understand. Every time this issue makes the headlines, some Muslims who are vocal in the media make a point of stating that it is a cultural practice that has nothing to do with Islam.

It is time to clear this up, and it is very simple.

In Surah al-Noor [2], Allah (SWT) commands believing men and women to lower their gazes and guard their chastity. Then He tells women to not expose their beauty except that which is normally apparent. There are two interpretations for the ‘normally apparent’. Ibn ‘Abbas (RA) says it means the face and hands. However, Ibn Mas’ud (RA) interprets it as whatever is apparent after the face is covered. [3]

In Surah al-Ahzab [4], the Prophet (SAW) is commanded to tell his wives, daughters and the women of the believers to ‘bring their outer garments close to them’ so that they can be recognised as noble women and not be harmed. In response to the verse, the women of Madina were reported to have come out with their faces covered in different ways. [5]

In light of the above, Muslims scholars have differed on whether or not covering the face is obligatory for women. This is true also of the four famous and currently practised schools of thought. The Hanafi and Maliki schools do not consider covering the face to be obligatory. The Shaf’i and Hanbali schools declare it obligatory. Later Hanafi jurists preferred the obligatory ruling due to an increase in immorality resulting in the need for women to be more prudent and protective over themselves. [6]

The above difference of opinion based on varying interpretations is not unique to this issue, thousands of issues are differed upon in exactly the same way. Muslims accept both positions as acceptable interpretations. Preference is either based on an academic leaning or based on precaution and prudence. The fact that there is disagreement does not take any matter outside of the pale of the Islamic tradition. In the case of men, the same is true of the beard, the cap, wearing trousers above the ankles. All of these are issues that have differing views, yet all of these issues are part and parcel of Islam and all are issues wherein the current practice of Muslims is diverse. To suggest that any such issue is cultural and not religious demonstrates an overwhelming ignorance of Islamic teachings. In some instances it also indicates crass-pragmatism and an inferiority complex owing to an inability to cope with issues presented by modernity. There will be those ‘progressive Muslims’ who give little importance to the hadith literature and claim to only be following the Qur’an, interpreting it in whichever fanciful way suits their preference. The contradiction they have to overcome is that the Qur’an itself was preserved by the memories of the Prophet’s companions and their oral tradition. Thus if one accepts the Qur’an as being preserved through the memories of these most trustworthy of human beings then how can one choose to ignore the weight of their testimony in other matters relating to the Sunnah of the Prophet Muhammad (SAW).

On any Islamic issue where there is a difference of opinion, the individual chooses what to do. There is no force or coercion. In the matter of the niqab, many women find it more conducive to Islamic teachings around modesty, chastity, and neutralisation of sexual attraction, and so wear the niqab as a mark of their commitment to these ideals and their piety. It doesn’t even have to mean they consider it obligatory; nor does it mean that those who do not wear the niqab are less chaste or modest. It is about one’s personal feelings about themselves and how they manage their own spirituality. Many of my students know that I do not consider it obligatory. I see them join my classes without the niqab, soon after, they start wearing the niqab. I don’t even know why they did it. Ultimately, it’s their choice and none of my business. But it is a religious choice and not a cultural one, which means a woman makes the choice to adopt an Islamic teaching in the hope of being rewarded by Allah (SWT). This is the essence of any religious practice.

The idea that women are being forced to wear the niqab is laughable. I’m sure some wear it because their husbands or fathers want them to. But choosing to respect their wishes does not mean they are forced. Maybe the would-be heroes who seek to emancipate niqab-wearing Muslim women should actually talk to niqabi women to find out how they feel rather than excluding them. An act that is so undemocratic, one wonders what kind of government these MPs think they represent?

In my fifteen years as an active imam and teacher with thousands of students, I have rarely come across a woman who complained that she was being forced to wear the niqab. Given that I do not hold it to be obligatory; I would be an obvious imam to consult for such women. Ironically, the complete opposite is true: women regularly complain that they choose to wear the niqab but their husbands or fathers pressurise them to take it off. They ask whether they have the freedom in Islam to hold their ground. If the niqab gets banned, these MPs would have succeeded in taking away their freedoms and would have played in to the hands of patriarchy, something that would never have occurred to them.

At the root of it is ignorance and arrogance. Ignorance of what the niqab really is about, and arrogance that leads to imposing one’s own views, preferences and anxieties upon the freedoms of others. Whatever happens, Muslims will adapt and we’ll move on. We’ve seen and been through worse. Britain as a whole needs to think carefully about what it stands to lose if it goes down this path. As far as I am concerned, democracy, human rights and liberal values are now being interpreted in a very dubious way. Muslims just have to stick to their principles. We were around before modernity and many other aspects of new-age conventional thinking, we will not be dictated to by it, we have not given in to it like Christianity and other faiths, and indeed we have no need to do so. Furthermore we will be around the day they have moved-on and become unrecognisable to westerners whose ancestors fought for them. It seems they are already moving on, albeit a move backwards.

Share. Facebook Twitter LinkedIn Email Telegram WhatsApp
Previous ArticleNiqab debate: ‘Sometimes you have to force people to be equal’
Next Article The Spotlight on the Niqab: Is it Bad for Islam?