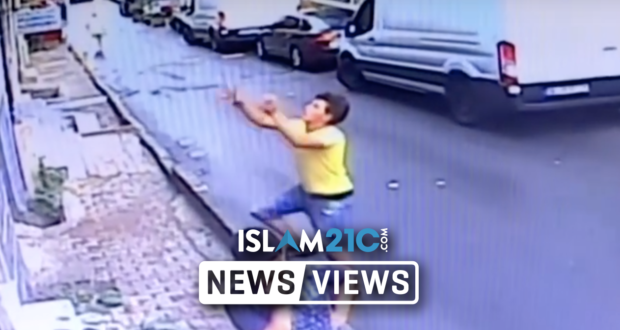 A recent video shows a 17-year-old Algerian boy catching a two-year-old toddler after she fell out of a building window in Istanbul, Turkey. [1]

Feuzi Zabaat, was working nearby in a frame workshop before he was called into action after anticipating her fall from the street below.

When he saw the toddler accidentally spill out of an open second-floor window, he positioned himself almost perfectly to catch her.

The Syrian toddler, Doha Muhammad, came away scot-free thanks to the quick response of Feuzi.

Watch the incident unfold below:

The family have since thanked Feuzi, calling him a “hero”, and her dad, Joseph, handed him 200 Turkish Lira (£27) as a reward, in addition to making a religious sacrifice the next day to celebrate the rescue of his daughter. [2]

But Mr. Zabaat told reporters, the reason for why he acted:

And as Muslims, we are reminded in the Qur’ān:

“And whoever saves a life, it will be as if they saved all of humanity” [4]

Feuzi’s actions and eventual reason for doing what he did, to thank Allāh (subḥānahu wa taʿālā), are not to be taken lightly.

In 1964, the stabbing of Catherine “Kitty” Genovese near her home, gave rise to many psychological studies to investigate the reaction, or lack thereof, from the people around her. According to the New York Times, 38 people had watched her as she was being attacked for more than half an hour. [5]

The result of the research produced a famous concept known as the bystander effect, whereby people are less likely to intervene or offer their support in public spaces when scenes of violence or aggression are taking place but are more likely to act when they are alone. [6]

Why? Because of another model in psychology that contributes to the bystander effect, known as audience inhibition. This explains that people are more reluctant to respond to emerging situations, especially emergencies, that require them to intervene, simply out of fear that people will negatively evaluate their altruistic behaviour. [7]

Had this been the case for Feuzi, and had he adopted this mindset that many people unintentionally embody, in which he would “leave it to someone else to deal with it”, the young toddler may have suffered a serious injury that would leave her severely disabled for life or even led to her demise.

We would have to attempt to save them whilst forgoing the fear of consequences from others, for we have a moral ethical perspective that is dominated by Allāh (subḥānahu wa taʿālā), not the cameras.

So if you ever do find yourself in a similar situation to the one you read about today, then remember the following words of Feuzi Zabaat:

2019-06-28
Hamza Saleem
Previous: Allāh is His Protector
Next: Parents should not take children out of RE lessons over Islam, say headteachers