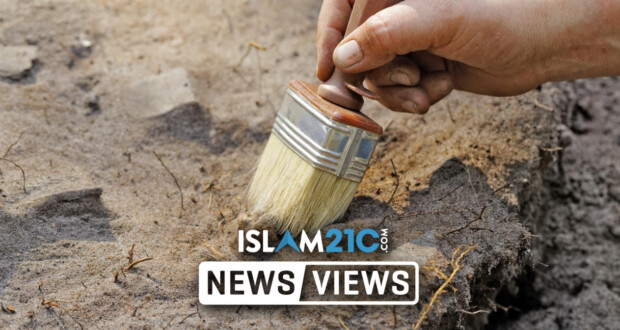 A rare treasure trove of 1100-year-old Islamic gold coins have been unearthed in occupied Palestine. Excavators working just south of Tel Aviv found a broken clay juglet secured by a nail, with 425 gold coins inside.[1]

In the sands of what was once part of the great Abbasid Caliphate, the centuries-old gold coins had been left undisturbed until last week. Robert Kool, a coin expert at the Israel Antiquities Authority, said the find was a “rare treasure” that could help archaeologists gain a deeper understanding of the Abbasid period.[2]

“The hoard consists of full gold dinars, but also — what is unusual — contains about 270 small gold cuttings, pieces of gold dinars cut to serve as small change.”

The 24-carat pure gold coins with Arabic inscriptions date to the third century AH (9th century CE), when the Abbasid Caliphate ruled a titanic empire from Iran in the east to North Africa in the west. Among the gold coins found in the cache is a dinar minted by the Caliph Harun al-Rashid himself.[3] A fragment of a gold solidus coin of the Byzantine Emperor Theophilos was also found among the hoard.[4]

The coins would have been a small fortune at the time – enough to buy a luxury home in one of the Caliphate’s capital cities, Fustat.[5] However, the coins are now priceless, and many social commentators have called on Israel to return the Islamic artefacts to the Palestinian people.

Oz Cohen, one of the excavators who found the gold coins, said:

“When I looked again, I saw these were gold coins. It was really exciting to find such a special and ancient treasure.”[6]

Cohen and other young Israelis have been volunteering in the sprawling archaeological site as part of a program to connect young Israelis to the history of the ancient land, before commencing their mandatory military service.[7]

However, others have questioned how deep the lessons will reach, with some bringing to mind Seth Rogen’s recent comments on Israel: “I was fed a huge amount of lies about Israel’ and “They never tell you that, ‘Oh, by the way, there were people there’. They make it seem like it was just like sitting there, like the ****ing door’s open.”[8]

Whilst efforts to find biblical relics continue, archaeological evidence continues to witness Islam’s illuminous past in and around Palestine. The coins speak of how the region was once a metropolis and at the centre of commerce and settled civilisation from the very earliest ages of Islam.

2020-08-25
Dr Izzadeen Chowdhury
Previous: Downing Street: Parents in England and Wales may be fined if they do not send their children to school
Next: The Ugly Side of Dickens: Decolonising English Literature