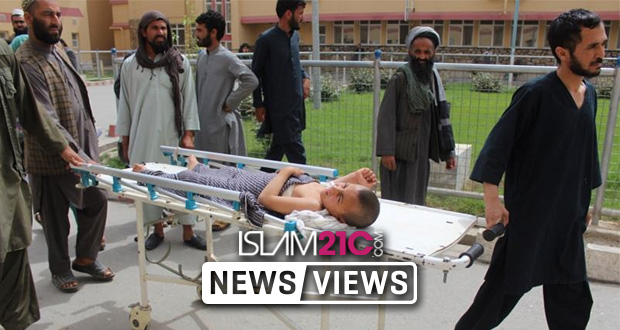 The Supreme Council of the Muslim Scholars’ Association issued a statement about the massacre carried out in the Kunduz province of Afghanistan at a graduation ceremony of students who had completed the memorisation of the Qur’ān. The text of the statement is as follows.

In the name of God, the Entirely Merciful, the Especially Merciful

All praise is to Allāh who said in His revelation:

“Permission [to fight] has been given to those who are being fought, because they were wronged. And indeed, Allāh is competent to give them victory.”[1]

And may peace and blessings be on our Prophet Muhammad, his family, and all of his companions. To proceed:

The Muslim Scholars Association has followed the heinous crime perpetrated against our Muslim brothers in the city of Kunduz (Afghanistan) after an air raid by the Afghan forces last Monday (April 2nd 2018) on the Qur’ān school in the province of Kunduz situated in the north-east of the land. This attack culminated in the murder of 100 people and the injury of 50 others.

This aircraft targeted the school during the graduation of a number of students who had completed their memorisation of the Holy Qur’ān.

And indeed, the Association opposes this nefarious crime which has ended the lives of young children who had memorised the Holy Qur’ān, and the Prophetic Sunnah. Firstly, we extend our condolences to the relatives of the victims and the injured, we ask Allāh to accept them amongst the martyrs who are closest to Him, and that He punishes the United States, and those who aid them in their crimes who have worked with their weapons for the weakness of this Ummah of the people of the Sunnah.

This massacre and the targeting of the carriers of the Holy Qur’ān, the Scholars, and the Callers to Islām, come in the context of successive violation against the Muslims which includes their countries from Sham and Palestine to Burma to Afghanistan; because our people have been put under the shadow of silence, our governments neglect the orphans in favour of wasteful banquets for criminals. And there is no ability nor power except with Allāh the Most High, the Greatest.

And this is not the first time a massacre in Kunduz has been committed. On October 3rd, 2015 a US Special Forces aircraft bombed the Médecins Sans Frontières (Doctors Without Borders, MSF) hospital killing 42.

In view of this calamity the Association calls for the following:

Firstly: To the mothers and fathers of the victims, that they should have Sabr and think about what has befallen their loved ones, and indeed they know that Allāh the exalted has chosen for them something greater than the martyrdom of this world, and they should make duʿā against the oppressors that Allāh punishes them.

“There are three whose supplications are not turned back: A just ruler, and a fasting person until he breaks his fast. And, the supplication of one who has been wronged is raised by Allāh up to the clouds on the Day of Resurrection, and the gates of heaven are opened for it, and Allāh says, ‘By My Might I will help you (against the wrongdoer) even if it is after a while.’”[2]

Secondly: It is upon the Arab and Muslim world to intervene to stop this intentional persecution of the Muslims in Afghanistan and other places. This duty of loyalty to those who are brothers in faith and belief makes it obligatory for them to sever ties with these occupying countries which bring war to Muslim lands. These countries know well the actions that Britain and Europe have taken against Russia for the targeting of a single individual for assassination. Allāh the Almighty says:

“And those who disbelieved are allies of one another. If you do not do so, there will be fitnah on earth and great corruption.”[3]

Thirdly:  One is in incredible astonishment concerning the intentional silence on the part of the Arabic and Islamic outlets in reaction to this huge calamity that has befallen the people of Qur’ān.

Fifthly: That the scholars, callers to Islām, and those who deliver sermons to remind the muslims of this great calamity, and that they stand with what Allāh has commanded them with to make duʿā and call for the help of their oppressed and downtrodden brothers all around the globe.

“And Allāh is ever predominant over His affair, but most of the people do not know.”[4]

Statement by the Supreme Council of the Muslim Scholars Association