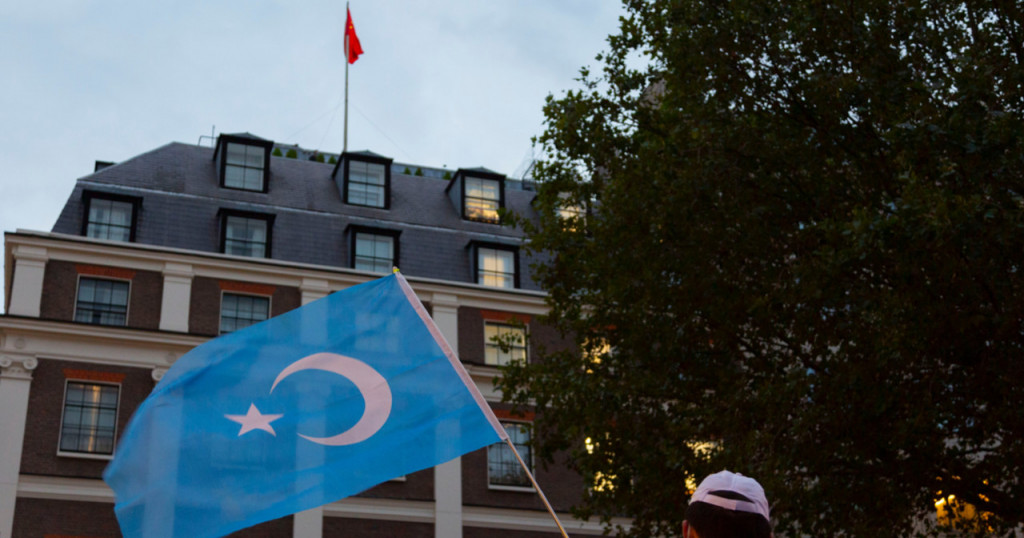 Just weeks before the 2022 Beijing Olympics get underway, a major sponsor has once again been condemned for its property listings in the Xinjiang region of China. Xinjiang – or East Turkestan as it is referred to by the inhabitants of the majority-Muslim locale – has for a number of years been subjected to genocidal policies that come from the very top of China’s authoritarian leadership. In a 7 January letter, the American online lodgings marketplace Airbnb was strongly criticised by two senior members of the United States Congress. Senator Jeff Merkley (D-OR) and Representative James McGovern (D-MA) delivered a probing letter to CEO Brian Chesky. The letter sought answers to a number of questions pertaining to the ongoing Uyghur genocide in Xinjiang, on top of Chinese state discrimination against Tibetans. In addition, McGovern and Merkley quizzed Chesky on his company’s apparent inaction regarding the myriad human rights abuses occurring specifically within Xinjiang. [1] [2]

In their opening remarks, the joint authors of the open letter questioned Airbnb’s commitment to countering human rights violations, particularly with the Beijing Olympics looming large. Merkley and McGovern state in the letter to Chesky:

“We write to raise concerns over Airbnb’s business activities in the Xinjiang Uyghur Autonomous Region (XUAR) of China and to raise questions about Airbnb’s commitment to human rights and anti-discrimination in China as it sponsors the Beijing Winter Olympics. In particular, we are concerned about a recent report by Axios that some of Airbnb’s listings in the XUAR are located on land owned by an entity sanctioned by the U.S. Treasury Department. Axios found that more than a dozen Airbnb listings in the XUAR were located on land owned by the Xinjiang Production and Construction Corps (XPCC). According to the U.S. Department of State, the XPCC, a quasi-military organization, is directly involved in forced labor and possibly other human rights abuses in the XUAR.” [2]

The open letter further notes that the US State Department found China to have “committed genocide and crimes against humanity against Uyghurs and other ethnic minority groups in the XUAR” in 2021. Notwithstanding this finding, the letter notes that Airbnb “continues to maintain listings in the XUAR”. [2]

“…it has not publicly condemned the continuing genocide taking place there, or other egregious, systematic human rights abuses being carried out against ethnic minorities in China. It also continues to operate in a country whose laws require hosts to discriminate based on ethnicity, place of origin, or lack of a passport, when the ability to obtain a passport can be impossible for people of some ethnic groups.” [2]

Rights campaigners have time and again called on Airbnb to reconsider its existing relationship with the Chinese government, especially its decision to maintain property listings in Xinjiang. As Merkley and McGovern noted in their opening paragraph to the Airbnb CEO, late 2021 research undertaken by news platform Axios found that the rentals marketplace is traversing murky waters. It finds itself at risk of being subject to US regulatory action due to live listings for fourteen properties on land owned by the XPCC. [3] [4]

Following its investigation, Axios shared information regarding publicly available XPCC listings. One property sought to entice would-be guests by boasting of “XPCC cavalry culture”. Another site is apparently a rural hotel in the county of Altay which bears the tagline: “Come here to experience a new rural area of the XPCC…the host is a 75-year old XPCC retiree.” [3]

Senator Merkley and Representative McGovern are the respective Chairman and Co-Chairman of the Congressional-Executive Commission on China (CECC), which is a powerful independent body that was established in 2000. In essence, the group is tasked with monitoring human rights in the People’s Republic of China. As the Commission’s website states:

“The Congressional-Executive Commission on China was created by Congress in October 2000 with the legislative mandate to monitor human rights and the development of the rule of law in China, and to submit an annual report to the President and the Congress. The Commission consists of nine Senators, nine Members of the House of Representatives, and five senior Administration officials appointed by the President.” [5]

In their concluding remarks, McGovern and Merkley posed four questions to Airbnb’s Brian Chesky, seeking answers regarding any steps the firm has already taken to “remedy the human rights impact of their continued business in China”. They also enquired as to whether the properties marketplace has any future plans to ensure that human rights are not violated during its trade in the country.

1. “What actions is Airbnb taking, beyond removing discriminatory listings, to remedy human rights violations in the XUAR and throughout China? If Airbnb is not taking any additional actions, why is it not doing so?

2. Has Airbnb reached out to government experts, civil society representatives, human rights advocates, and members of the Uyghur and Tibetan diaspora to consult with them on how best to remedy the human rights impacts of their continued business in China, in line with the UN Guiding Principles on Business and Human Rights?

3. Moving forward, will Airbnb commit to monitoring listings in the XUAR to ensure no listings are located on property owned by the XPCC or other entities sanctioned by the U.S. Treasury Department and/or involved in systematic human rights abuses, and to remove such listings if they are discovered?

4. In line with co-founder Joe Gebbia’s statement that “Airbnb’s mission is to create a world where anyone can belong anywhere,” does Airbnb commit to using its platforms to speak out actively on behalf of the human rights of Uyghurs and other ethnic minorities in China?” [2]