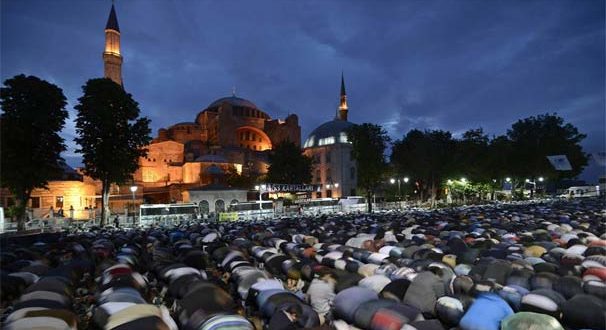 Thousands of Turks attended Fajr prayers on the morning of Saturday 13th of May at the square of the famous Ayia Sophia in Istanbul to commemorate the 564th anniversary of the Conquest of Istanbul.[1]

The initiative, launched by the Anatolian Youth Association resonated throughout Turkey, and under heightened security, the event was launched with the recitation of verses from the glorious Qur’an. Participants called for the reopening of Ayia Sophia as a place of worship since it is currently being used as a museum for tourists.

Before the Fajr prayer, led by Sheikh Mohammad Ali Al-Abbasi, the event was decorated with Islamic Nashids, ending with a supplication delivered by Sheikh Al-Rifai for the sake of Turkey and the whole world. In his address Turhan said: “Many international organisations have worked relentlessly to turn Ayia Sophia into a Museum, managing to achieve this through (the use of) forged signatures in 1934.”

An alleged decree was issued in Turkey’s early republic history, attributed to Kemal Atatürk ordering the transformation of the Ayia Sophia Mosque into a museum. Activists and politicians question whether a decree was even issued by Atatürk, holding that it was forged.[2]

Turhan further stressed that the Anatolian Youth Association is striving to reopen the historic Mosque for the sake of worship, catering for the millions of Turkish Muslim nationals and tourists that fill its neighbouring Mosques during prayer times, highlighting that this cause “does not concern the people of Istanbul alone, but rather it concerns Muslims all over the world.”

The prophecy of Islam liberating Europe

Muslims in Turkey and around the world mark the month of May every year in commemoration of the Conquest of Istanbul at the hands of the distinguished Ottoman, Muslim Sultan Mohammad al-Fateh (meaning the Conqueror, Opener or Liberator) in the year 1453 CE. For several centuries it was resilient against Islamic attempts at opening the city, and for that long many Muslim leaders went to great feats to achieve this. For every one of these leaders sought to be the fulfilment of the Prophet statement, made from the heart of Arabia:

Previous: Is your parental love affecting your judgement?
Next: CAGE director arrested for remarkably principled stance