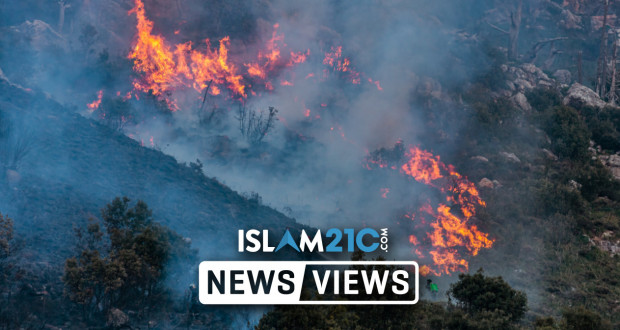 Since Thursday, the North African state of Algeria has been observing three days of mourning after deadly wildfires reportedly linked to arsonists engulfed the country. The flames have taken the lives of at least 69 people, including 28 soldiers who were drafted in order to aid in firefighting efforts. President Abdelmadjid Tebboune on Tuesday declared the commencement of the mourning period, as more fatalities are expected to be reported during ongoing rescue efforts. [1]

Officials believe arson is the cause of the majority of wildfires, as temperatures hover at a blistering 45-46 degrees Celsius in the current dry and windy conditions. President Tebboune provided the following details in a live speech on state television:

“Some fires have been caused by high temperatures but criminal hands were behind most of them. We have arrested 22 suspects, including 11 in Tizi Ouzou. Justice will perform its duty.” [2]

A number of countries have been suffering from wildfires during the current summer. Countries such as Greece, Lebanon, Turkey, Cyprus, Italy, Canada, and the US are all witnessing widespread destruction due to recent rural fires. Maher Mezahi, a journalist based in Tizi Ouzou – the Algerian province most badly hit by the latest wildfires – said the country lacked the right vehicles to put out the fires.

“The government did send out several different helicopters to fight these fires but these helicopters are only equipped with Bambi Buckets which have a capacity of a thousand liters.” [2]

Mezahi further added regarding the government’s efforts to bring in international support:

“They’ve called on the European Union to send over some firefighting aircrafts. France sent over two yesterday and those have a capacity of six to seven thousand liters and they’ve been a lot more effective in fighting these fires that are in very difficult places.” [2]

Moreover, a number of planes are expected to be dispatched by both Switzerland and Spain. Other nations which are offering assistance include neighbouring Morocco, which has had a difficult relationship with Algeria as of late, due to the former’s thawing ties with ‘Israel’. Food and medicine supplies are reportedly scarce; during his televised speech on Thursday, Tebboune praised aid caravans for stepping up and bringing urgent donations to affected areas. [3]

However, in a disturbing development, a mob in the Tizi Ouzou town of Larbaa Nath Irathen lynched a man they suspected of having started one of the wildfires. Video posted online on Wednesday showed the gruesome killing of 38-year-old Jamal Ben Ismail, who a crowd viciously beat before setting ablaze. Algeria’s state prosecutor has launched an investigation into the grisly murder, warning that those responsible “will receive a severe punishment”, further emphasising that “odious crimes should not remain unpunished”. [4]

The Algerian League for the Defence of Human Rights described the lynching as “barbaric and atrocious”. [4]

“Scenes of the lynching and torching of the suspected arsonist – a young artist who had come to help put out the fires – are shocking.” [4]