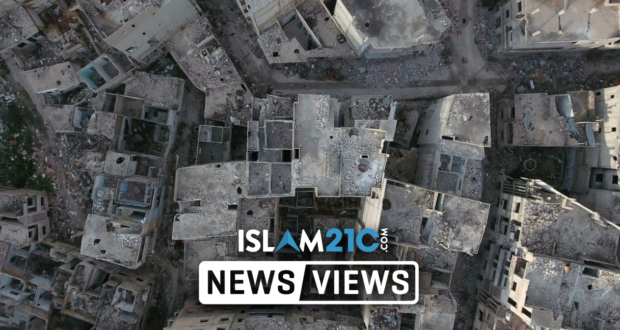 The Syrian regime on Tuesday broke the ceasefire it signed only five days ago and has resumed its attack on the rebel-held province of Idlib in northern Syria.

According to the Syrian Observatory for Human Rights, regime war planes launched their attack on the town of Khan Sheikhun after accusing rebel forces of targeting a Russian airbase as well as blaming Turkey for not abiding by its commitments.

“Regime warplanes launched their first air strikes on the town of Khan Sheikhun in Idlib’s southern countryside,” the human rights organisation said in a statement, confirming the breaking of the ceasefire by Assad’s forces.

Although the regime signed up to the ceasefire on Thursday last week, it continued shelling the beleaguered province, with a woman being killed on Sunday in the Bidama district in west Idlib.

Rami Abdurrahman, the head of the Syrian Observatory for Human Rights, said that the death in the Bidama district was “the first death since the implementation of the truce deal.” Furthermore, Dr. Fadi Karim, a worker for the Turkish-based NGO White Smile, confirmed that regime airstrikes had resumed once again.

“We received communications from aid workers in the area confirming that they had witnessed helicopters carrying barrel bombs heading towards Khan Sheikhun,” Dr. Karim said.

On Saturday, a Syrian human rights group called the Hunger Strike For Idlib launched a hunger strike in solidarity and protest for the Syrian civilians living under the constant threat of indiscriminate bombardment from the regime. The group is also staging daily demonstrations outside Downing Street in London to draw awareness to the killing in Idlib province and across Syria as a whole.

The Syrian regime on Friday agreed to a conditional ceasefire in the rebel-held and besieged province of Idlib. The announcement followed months of intense bombing by regime forces and its allies on the last rebel-held province in the north of the country. Friday’s agreement, however, was on condition that the Turkish-Russian buffer zone be implemented.

The Turkish-Russian deal, also known as the Sochi agreement, was signed in September 2018 and created a buffer zone of 15 to 20 square kilometres to separate regime forces from the rebels in Idlib province. This buffer zone is monitored by both Russian and Turkish troops.

Syria’s eight-year civil war was born out of peaceful protests by Syrian civilians for reforms and changes in the Syrian regime. The latter’s response was one of violence and brutality, which forced the people to take up arms in defence. Over a million Syrians are trapped in Idlib province without adequate food, shelter, and medical security.

Over 500,000 people have been killed in the regime crackdown, with many more being displaced. The Syrian regime, with backing and support from its allies Russia and Iran, has been able to militarily defeat the opposition and rebel fighters, and has been regaining territory that had been lost in previous years.