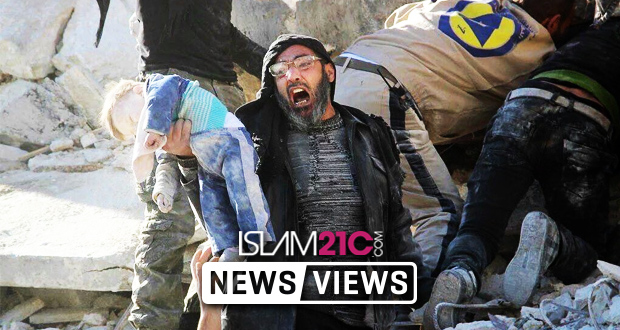 The death toll continues to rise in Eastern Ghouta where Assad’s forces, strongly backed by Russian air support, have been viciously bombing since intensifying their attacks on Monday. At least 200 civilians, including many children, are said to have been killed so far this week,[1] taking the number of deaths to well over 400 since the Assad regime stepped-up its assault on 29 December.[2]

The rebel-held suburb, home to roughly 400,000, is on the outskirts of Damascus and has been under siege since 2013. It remains an opposition stronghold and is known as the location of Assad’s suspected deadly chemical attack in that same year, which nearly prompted UK military action at the time.[3]

Despite the area being listed within a de-escalation zone and under supposed ceasefire since late November 2017,[4] the attacks have continued and particularly escalated this week, possibly in response to the downing of a Russian plane in Idlib,[5] where there are also reports of further chemical attacks this week.[6]

Bombings are reported to have targeted residential areas, hospitals and schools, while the area has been denied access to humanitarian aid since November 2017.[7] Amidst the severe food, fuel and medicine shortages, the United Nations has called for an immediate cessation of hostilities to allow aid to be delivered. Panos Moumtzis, assistant U.N. secretary general, was quoted as saying:

“For the last two months we have not had a single (aid-delivery) convoy. This is really outrageous. Humanitarian diplomacy is failing; We are not able to reach the conscience or the ears of politicians, of decision makers, of people in power.”

The humanitarian situation is worsening by the day; in December the UN reported that 12% of children under 5 are acutely malnourished,[8] which is the highest rate since the conflict began. It is unknown how much this rate has grown since that report.

Al Jazeera managed to interview a number of Eastern Ghouta residents this week,[9] revealing shocking details of the situation faced on the ground, with one resident saying “The rockets being used tear the buildings apart and people get buried under the rubble where they hide.” Local councillor Ahmad Ahmad revealed that “We’re depending on wells that we’ve drilled ourselves…water, which according to laboratory analysis is not drinkable.” The Guardian reported that a doctor in the region said “Ghouta is drowning in blood.”[10]

Unfortunately such events have become the norm during the civil war which has claimed nearly half a million lives and displaced 12 million.[11] The defeat of Daesh will perhaps re-shift the limelight onto the heinous crimes of Assad and his allies.