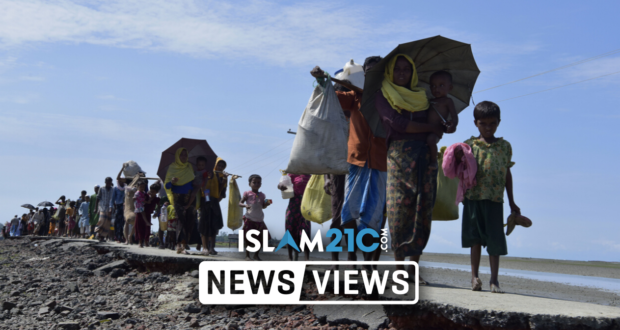 Myanmar leader, Aung San Suu Kyi, has appeared at the UN International Court of Justice (ICJ) in the Hague to defend her country against accusations of atrocities committed towards its Muslims citizens.

Journalists in The Hague gather in front of the Peace Palace, home of the Int’l Court of Justice, for the opening hearing of #Myanmar #Rohingya #genocide case brought by The #Gambia. pic.twitter.com/6n7FeD7TOr

Gambia is leading the case against Myanmar, with the once globally acclaimed “human rights champion” called upon to answer for her crimes that caused more than 730,000 Rohingya to flee Myanmar after they were forced into the world’s largest refugee camp across the border in Bangladesh. [1]

As of 30th September 2019, there were 915,000 Rohingya in Bangladeshi camps. The surge in refugees caused Bangladesh to set up a voluntary return scheme, yet none have chosen to return. [2]

An independent fact-finding mission found that soldiers had gang-raped women and children, razed villages, and burnt people alive in their own homes. [3]

A court petition said the military “intended to destroy the Rohingya as a group, in whole or in part, by the use of mass murder, rape and other forms of sexual violence, as well as the systematic destruction by fire of their villages, often with inhabitants locked inside burning houses.”

The West African state has made the accusations with the support of the 57-member Organisation of Islamic Co-operation (OIC) and a team of international lawyers in what is only the third genocide case filed at the court in the Hague since the Second World War.

“All that The Gambia asks is that you tell Myanmar to stop these senseless killings, to stop these acts of barbarity that continue to shock our collective conscience, to stop this genocide of its own people.”

On Tuesday evening, Canada and Netherlands released a joint statement in support of Gambia.

“Canada and the Netherlands consider it their obligation to support the Gambia before the International Court of Justice, as it concerns all of humanity.”

Aung San Suu Kyi was said to be sitting “expressionless” in the courtroom, as details were shared of the alleged atrocities. She was awarded the Nobel Peace Prize in 1991 for her non-violent struggle for human rights in the country, spending years under house arrest for promoting democracy.

In her opening statement, she called the case against her country “incomplete and incorrect”, [4] attributing the “troubles” to an internal, centuries-old tussle.

“The troubles in Rakhine state … go back into past centuries and have been particularly severe. ARSA [Arakan Rohingya Salvation Army] seeks independence for Rakhine, finding inspiration from the [ancient] Arakan kingdom.” [5]

She told the court:

“We are dealing with an internal armed conflict, started by coordinated and comprehensive attacks by the Arakan Rohingya Salvation Army, to which Myanmar’s defence services responded” 5

Though the case is expected to be ongoing for the next couple of days, the Gambia has asked the court to impost “provisional measures” to protect the Rohingya Muslims in Myanmar and elsewhere from further threats and violence.

This would mean that the court would have to rule that the state acted “with intent to destroy in whole or in part” the Rohingya minority, essentially committing genocide.

Aung San Suu Kyi, who had taken a significant fall from the top over her silence of the plight of the Rohingya, would not be arrested, nor put on trial, but a ruling against her favour would lead to future sanctions and inevitable reputational and economic damage to the Southeast Asian nation of Myanmar.