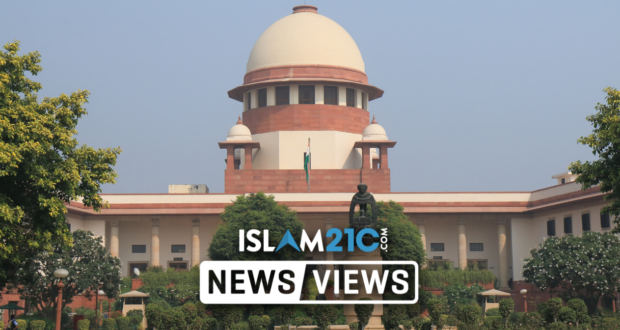 In a provocative ruling on Saturday, India’s Supreme Court granted Hindus control over the controversial and much-disputed religious site in the town of Ayodhya.

The historical site of the early 16th century Babri Mosque, which is claimed by both Hindus and Muslims, will be handed over to Hindus for the construction of a temple.

The outrageous verdict was declared whilst security was heightened across the country. The court ruled that Muslims will be given land as an alternative in Ayodhya. In the unanimous decision, the five-judge bench requested the government to form a trust that will build the Hindu temple.

In response to the news, Zafaryab Jilani, a lawyer from the Sunni Waqf Board, stated:

“The judgement is not satisfactory but we respect it. We will have discussions and then decide further course of action.”

Others, such as Faizan Mustafa, vice-chancellor of NALSAR University of Law in Hyderabad, called the ruling “controversial.” Mustafa added:

“The judges tried their best to have a kind of a balance but ultimately it’s the mystery of the faith over rule of law, because they [judges] said that we can’t be doing anything about the Hindu belief and if they believe that Ram was born here … we have to accept it.”

“Belief is good for the purposes of religion, but can it become a basis to resolve property disputes?”

The ‘Butcher of Gujrat’ Narendra Modi hailed the ruling, saying it had “amicably” finished the decades-old row. He tweeted:

“The halls of justice have amicably concluded a matter going on for decades. Every side, every point of view was given adequate time and opportunity to express differing points of view. This verdict will further increase people’s faith in judicial processes.”

Hindu-nationalists and hardliners believe that their so-called ‘Lord Ram’ was born at the site of the Babri Mosque. They claim that the first Mughal emperor Babur built the Babri Mosque on top of a temple at the site. There is no evidence to suggest the claims made by the Hindus are correct. Muslims have long-established that they have prayed at the mosque for generations, until 1949, when Hindus placed idols of ‘Ram’ at the site.

Hindu mobs demolished the mosque, which had existed for 460 years, in 1992. This provoked religious violence across the country and left at least 2,000 people dead, most of whom were Muslims.

Pakistan responded to the ruling on Saturday in a statement issued by the Foreign Office in Islamabad, saying:

“This decision has shredded the veneer of so-called secularism of India by making clear that minorities in India are no longer safe; they have to fear for their beliefs and for their places of worship.”

“The Indian government should ensure the protection of Muslims, their lives, rights and properties and avoid being yet again a silent spectator of Muslims becoming the victims of Hindu extremists and zealots.”

“The international community, the United Nations and other human rights organisations in particular should play their role by restraining India from its pursuit of an extremist ideology.”

Response from the Muslim Community

Even as India’s Supreme Court handed over the site of Babri Mosque to Hindus for the construction of a temple, Muslim parties said they respected the verdict but were dissatisfied with it.

The Muslim side, represented by the All India Muslim Personal Law Board (AIMPLB), a body of senior Islamic scholars, said the judgement has not served justice.

A statement from the AIMPLB expressed surprise that the court, whilst accepting all the evidence put forth by the Muslim party, overturned its own argument in the end by handing over the land of Babri Mosque to Hindus, thereby exercising extraordinary discretionary powers. The Muslim body described attitude of the court as “painful.”

“Neither equity nor justice has been served,” said senior lawyer Zafaryab Jilani, who represented the Muslim body in the court.

Hindus and Muslims have for decades been bitterly divided over the 16th century Babri Mosque site.

“As per the Sharia law, we cannot give away a mosque. However, we will abide by the court’s verdict. The Hindus claim that the temple was present since the Vikramaditya era, but there is no evidence of that,” said Jilani.

Prominent Indian Muslim leader Asaduddin Owaisi also expressed dissatisfaction with the court verdict. He said the court was “indeed supreme but not infallible.”

“I am not satisfied with the verdict … We were fighting for our legal rights. We do not need five-acre land as a donation. In my opinion, we should reject this land offer. Do not patronize us,” Owaisi told a news conference.

The spokesman of the Babri Mosque Action Committee, Syed Qasim Rasool Ilyas, said that the Muslim community could not welcome the judgement.

Ilyas, also a member of the AIMPLB, told news website rediff.com: “If you dig any old structure you will surely find some ancient relic under that structure. So, this is not proof of a mandir [temple] under the Babri Masjid. And let me make it clear, the Supreme Court did not say the Babri Masjid was built by destroying a Ram mandir. In cases of title suit these things are not considered as evidence.”

He alleged that the Supreme Court was speaking the words of Lal Krishna Advani, a veteran Hindu nationalist politician, who led the movement for the temple that led to the demolition of Babri Mosque in 1992.

Advani had advised Muslims to take some other land to build an alternate mosque in Ayodhya. “The Supreme Court has echoed his words,” he added.

Jama’at-e-Islami Hind also expressed dissatisfaction with the judgement, but has appealed to people of the country to “honor the judgment, respect the law, and maintain communal harmony.”

“There should not be any polarization on communal lines due to the verdict. This judgment is neither a victory nor defeat of any party,” said Syed Sadatullah Hussaini, president of Jama’at-e-Islami Hind.