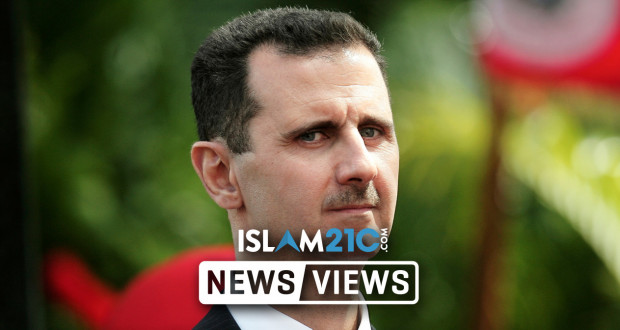 Syria’s so-called president Bashar al-Assad has been recently inaugurated for a fourth term in office, after receiving a staggering 95 percent of the electoral vote in May. It comes as no surprise that the farcical election had been rejected even before it took place. Western nations including the UK, US, France, Germany, Italy, and others have declared the vote to be “neither free nor fair”. [1] [2]

Yesterday marked 21 years since Assad succeeded his father and assumed the top executive role of the country. Ever since the 2011 Syrian Civil War began, the dictator has overseen a horrific clampdown which has eliminated opposition from within Syria’s general populace, including any political rivals. To cling on to power, Assad’s regime has had to commit crimes against humanity, including mass murder, torture, and rape against not only women, but even young girls, men, and young boys. In fact, the regime continues to lead a violent and oppressive campaign to eliminate the last remaining opposition strongholds in the Syrian Arab Republic. [3]

“Sexual violence against females and males is used to force confessions, to extract information, as punishment, as well as to terrorise opposition communities. Rapes and other acts of sexual violence carried out by Government forces and associated militias during ground operations, house raids, at checkpoints, and during detention formed part of a widespread and systematic attack directed against a civilian population, and amount to crimes against humanity. After February 2012, these acts also constitute the war crimes of rape and other forms of sexual violence, including torture and outrages upon personal dignity.” [4]

Syria’s civil war, which reached the unpalatable milestone of 10 years in March of this year, is still ongoing. Military conflicts continue to occur, particularly in the northwestern province of Idlib. The region has been a stronghold for the last remaining opposition forces, with the Syrian army having meticulously decimated resistance forces in other parts of the country. The opposition once had the upper hand, but the later military support provided by regional heavyweight Russia and Iranian ground forces have bolstered Assad’s position as ‘leader’ of the war-torn state.

In the detention facilities run by the regime’s military and security apparatus, regime critics and members of the opposition are often tortured or killed. Many international commentators argue that Assad has been responsible for the deaths of hundreds of thousands of civilians, as well as the internal and external displacement of millions. The UK-based Syrian Observatory for Human Rights has documented an unimaginable 387,118 deaths since the start of the Syrian Revolution until December 9 2020. [5]

The late Hafez al-Assad, Bashar al-Assad’s father, was Syria’s previous president for just under 30 years. He was a prime role model for Bashar on how to rule the civilian population in the most brutal manner possible. With Bashar’s 21 years in power, the majority Sunni country has experienced over half a century of despotism, with the Nusayri Assad regime always at the helm.

The infamous 1982 Hama massacre saw Hafez take charge of a three-week-long offensive in the city of Hama against a massive Sunni rebellion. This resulted in airstrikes that pummelled the area and butchered at least 20,000 Syrians. The massacre is regarded as the single bloodiest military assault by an Arab ruler against their own people, and is particularly noted for its utterly callous nature.

After weeks of airstrikes by the army, bulldozers were deployed to further level any remnants of homes and other structures. Ground troops also searched the rubble in order to shoot dead any survivors. A commenter on a Guardian article on the Hama massacre put the father and son duo together in a fitting sentence: “Maybe yesterday’s massacre by his son was to celebrate his father’s achievements”. This was a reference to the late July 2011 crackdown, when Bashar sent a contingent of troops and tanks to Hama, which murdered over 100 people. [6] [7]

Omar Habal, a local activist, told The Guardian at the time:

“They started shooting with heavy machine guns at civilians, at the young men protecting the barricades.” [7]

Bashar al-Assad continues to receive significant backing from Russia’s Vladimir Putin and Iran’s powerful Islamic Revolutionary Guard Corps (IRGC). In 2015, the Wall Street Journal reported that there were at least approximately 7,000 IRGC members active in Syria, with a further 20,000 Iran-backed or Hezbollah-supported foreign fighters serving on the ground. [8]

Immediately after al-Assad’s inauguration, the dictator had a conference with the foreign minister of China, Wang Yi. The two discussed the participation of Syria in China’s long-planned Belt and Road trade initiative. However, the two nations already have deep bilateral ties, as both the CCP and Syria’s Assad are no novices when it comes to murdering Muslims in order to maintain their hold on power. [9]