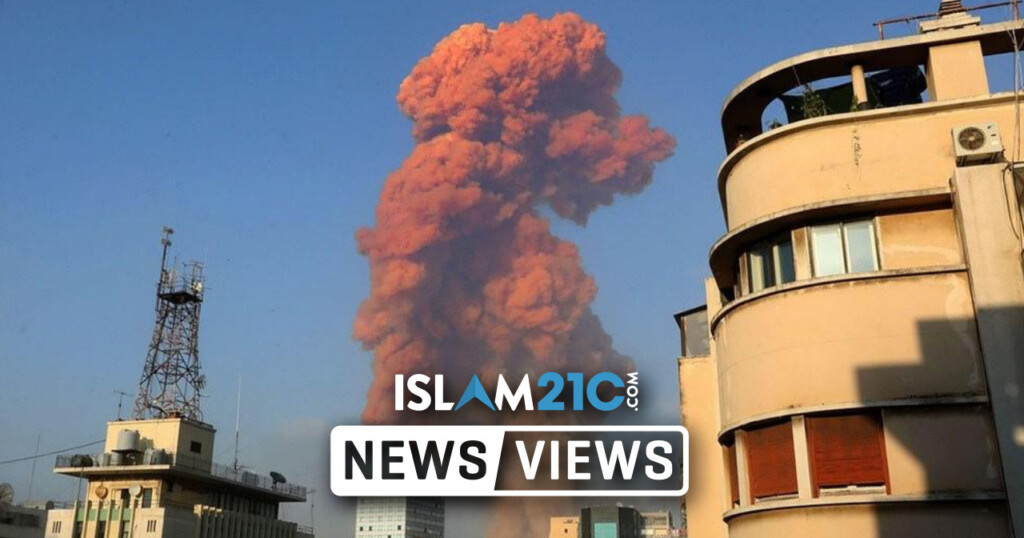 Almost everyone has seen the devastating footage of a massive explosion that took place in Beirut, Lebanon. The explosion yesterday afternoon sent shockwaves across the city and the world. Its blast was felt as far away as Cyprus, over 150 miles away, with some mistaking it for an earthquake.

“It is a catastrophe, I’ve never seen something like that.”

Lebanon is in a state of emergency following a massive explosion in Beirut that killed at least 100 people and injured thousands.

Damage from the explosion reached as far as the outskirts of the capital, with one source claiming “there isn’t a window that hasn’t been blown out in this area.”[1] An estimated 300,000 people are believed to have lost their homes, according to Marwan Abboud, the Governor of Beirut. Authorities have been working on providing food, water, and shelter for those who have been left homeless. Abboud estimates the cost of damages to range from $3-5bn, adding to the economic pressure on the capital.

Satellite images show a massive crater at the site of Tuesday's explosion in Beirut's port. The images show that nearly every building has either sustained significant damage or has been been destroyed by the blast. https://t.co/dcyyuD1YVk pic.twitter.com/gTHvaB9pEe

The deadly blast came amidst an unprecedented economic crisis that has seen the Lebanese pound lose 80 percent of its value, with many citizens taking to the streets in protests after rising unemployment rates.

Scenes from the morning after the explosion revealed destruction that has not been witnessed in the country since its devastating civil war that ended in 1990.

Following the explosion, Lebanese President Michel Aoun called for an emergency cabinet meeting and declared a two-week state of emergency after at least 135 people were killed and 5,000 were injured, according to the head of the Lebanese Red Cross, George Kettana.[2]

However, with hospitals overwhelmed, officials expect these figures to rise significantly after a large rescue operation commenced today to unearth victims that are believed to be trapped underneath the debris.

President Aoun offered his sympathies during an emergency cabinet meeting, saying, “there is no word to describe the horror of the catastrophe that occurred in Beirut yesterday.”

“I extend my heart and feelings to the families…and I ask God to heal the wounded, heal the broken hearts, and provide us with all the energy and determination to stand together to confront the painful burns that have scarred the face of Beirut.”

Prime Minister Diab also said it was “unacceptable” for a warehouse to store an estimated 2,750 tons of confiscated ammonium nitrate – which authorities believe generated the explosion – at a shipping port for six years without safety measures, after claims had surfaced that “nothing was done” about it.

While details of what may have caused the explosion remain as speculation, President Aoun vowed to conduct a full investigation into the cause of the deadly blast. Prime Minister Diab reiterated his pledge that those responsible for the massive explosion at Beirut’s port will pay the price.