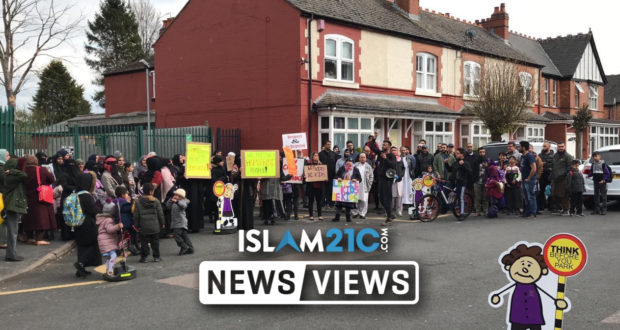 Birmingham: Parents’ call for solidarity in the legal battle over mandatory teaching of LGBT classes

Anderton Park School in Sparkhill, Birmingham has been at the core of national debate surrounding beliefs about “sexuality” and LGBT issues, which has been the subject of widespread news coverage recently.

For weeks, protests and demonstrations have been held outside of the school in Birmingham against the mandatory teaching of LGBT classes that will be taught to young children.

On Monday, the issue goes to the high court, when the impact of the protests on pupils, staff, residents and the wider community will be played out during a trial that is expected to last until Friday 18th October.

The high court battle which seeks to restrain protests at the school gates for good will decide whether a temporary exclusion zone that prevents protests from taking place in the area immediately around the school should be made permanent.

The parents of these young children have joined the protests and have publicly objected to such messages being taught to their children. In June, critics of the parents protesting outside the school were labelled as “‘snowflakes’”, a court in Birmingham heard.

Parents of the school children have argued that the City Council is attempting to “silence the truth” through the court. The Birmingham Parent Forum have organised a demonstration and encouraged people in the area to attend the hearing on Monday to stand in solidarity with the parents’ cause. The hearing will take place at Birmingham High Court on Monday 14th October at 9am.

In a message, the Birmingham Parent Forum stated:

“Do not let us be silenced, if Birmingham City Council succeed they will silence everyone city wide. There are 60,000 children in Birmingham who will suffer the disadvantage of being sexualised so early in life about sexual relationships. For many it will be traumatic  because it runs against their conscience and their family norms, they will feel ashamed by the school they trusted.”

“Birmingham City Council has taken a ‘hard-line’ attitude towards the parent protesters instead of engaging with them in meaningful talks, to avoid hearing the valid concerns they have.”

In late August, over a hundred scholars and Imams from various backgrounds and schools of thought in the UK called for true tolerance, following the row over the LGBT classes.

You can read the full statement here: Joint statement of Muslim scholars & Imams on LGBT row in schools

Hundreds of Muslim parents in Birmingham peacefully protested the actions of the senior leadership at their children’s’ schools. Parents argued that the classes go against Islam and is not age appropriate.