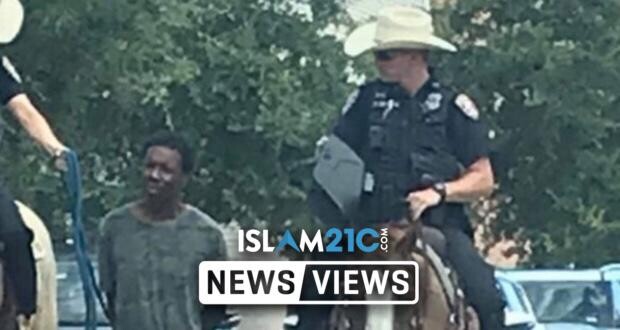 A black man who was led by two mounted police officers in Galveston, Texas, is suing the city for $1 million.

Donald Neely, who said he suffered humiliation and fear during his arrest, was tied up by two white officers on horseback and led by wrists through the streets.

The lawsuit, filed last week in the county district court, described the officers’ treatment of Neely as both “extreme and outrageous”, causing the 44-year-old both physical injury and emotional distress.

“Neely felt as though he was put on display as slaves once were,” the lawsuit stated, adding that Neely “suffered from handcuff abrasions, suffered from the heat, and suffered from embarrassment, humiliation and fear.” [1]

Photos of the arrest, which happened in August last year, showed the officers wearing cowboy hats on horseback and leading Neely on a rope linked to handcuffs. The imagery bared a stark resemblance to the capture of slaves in chains.

Professor Clayborne Carson of Stanford University told Al Jazeera that the incident was not merely “a matter of training” the police officers. He said:

“Anyone who has the slightest awareness of American history would understand the implication of seeing a black man paraded in that manner. It resonates with the worst aspects of racism, going back to slavery”.[2]

Footage of the arrest went viral on social media last year, resulting in a wave of online backlash. The scenes were compared to historic images of black slaves being walked in chains by white owners.

At the time, Adrienne Bell, a US Representative candidate, wrote on Facebook: “It is hard to understand why these officers felt this young man required a leash, as he was handcuffed and walking between two mounted officers.”

“It is a scene that has invoked anger, disgust, and questions from the community,” Bell added.[3]

In body camera footage released from the incident, one officer can be heard predicting twice that leading Neely down the city streets was “gonna look really bad.” The officer laughed both times as he made the comments.[4]

Neely, who was homeless at the time and suffering from mental illness, was sleeping on a sidewalk. He was arrested for ‘criminal trespass’, cuffed, and led around the block by the officers with a cup of loose change in his hands.[5]

The lawsuit accuses Galveston city and its police department of negligence. The complaint states that the police officers should have known Neely would have found his treatment “as though he was a slave” offensive and humiliating.

In response to the arrest, Galveston’s Police Chief Vernon Hale defended the actions of the officers as a “trained technique and best practice in some scenarios.” Hale added, however, that his officers had “showed poor judgement” although they “did not have any malicious intent.”[6]

Hale also stated that the officers should have waited for a transport unit and that the department had since updated its policy to ban the technique.[7]

Neely’s lawsuit accuses the city of malicious prosecution, but Galveston City officials have declined to comment on the case to news outlets. An internal Texas Rangers investigation found that the officers did not break any laws in the arrest of Neely. [8]