Are you ready for our first ever NATIONAL CAMPAIGN?
Home / News / Boris Johnson to pass law banning anti-Israel boycotts 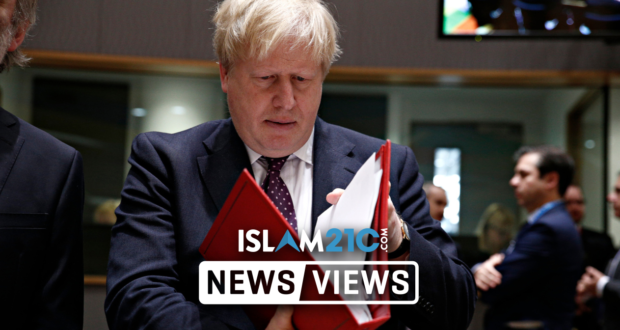 British Prime Minister Boris Johnson has stated his plans to pass a law banning local councils from engaging with the Boycott, Divestment and Sanctions (BDS) campaign against “Israel”. [1]

Eric Pickles, the UK Special Envoy for Post-Holocaust Issues, mentioned the idea during a speech at the Institute for Strategic Dialogue’s conference in Jerusalem on Sunday. Pickles said the new law would ban public agencies from working with those who boycott “Israel” in any way.

“BDS is anti-Semitic, and should be treated as such.” [2]

“Antisemitism is an attack on the British way of life and British identity.” [3]

All this comes despite the BDS movement having a history of non-violence since its inception in February 2005. The movement was inspired by the campaign that targeted South Africa’s apartheid regime. The BDS movement has three primary objectives:

These noble intentions have seen the Palestinian-led movement grow enormously over the years, with, among many others, South Africa’s Nobel Peace Prize laureate and veteran of anti-apartheid struggle, Archbishop Desmond Tutu, supporting the campaign.

However, the latest general election manifesto of the Conservative Party included a pledge to ban local councils from boycotting products from foreign countries, saying they “undermine community cohesion.”

“We will ban public bodies from imposing their own direct or indirect boycotts, disinvestment or sanctions campaigns against foreign countries.” [3]

Johnson himself has been an avid supporter of “Israel”, telling the BBC back in 2005 that he could “not think of anything more foolish” than boycotting “Israel”.

“The campaign for Boycott Divestment and Sanctions (BDS) seeks to hold “Israel” accountable for its violations of Palestinian rights and of international law.”

“Failing to take action to hold Israel to account makes one complicit. Israel has been engaged in a global campaign to have laws prohibiting BDS introduced so that it can act with impunity.”

Jamal also made mention of US President Donald Trump signing an executive order defining Judaism not only as a religion but also a nationality.

“Unsurprisingly a Conservative government that seeks to ally itself with Donald Trump and his far-right agenda is following suit.”

“All those who believe in international law, human rights and freedom of expression must vigorously oppose this legislation.” 1

The bill is expected to be announced as a government priority during the Queen’s Speech on Thursday. The anti-BDS motion would be similar to that seen in 28 US states that have passed laws that either restrict or prohibit any individuals and companions from boycotting “Israel”.

2019-12-18
Hamza Saleem
Previous: The Fiqh of Haste
Next: Quranic Community #6 | The Messenger is Like None Other