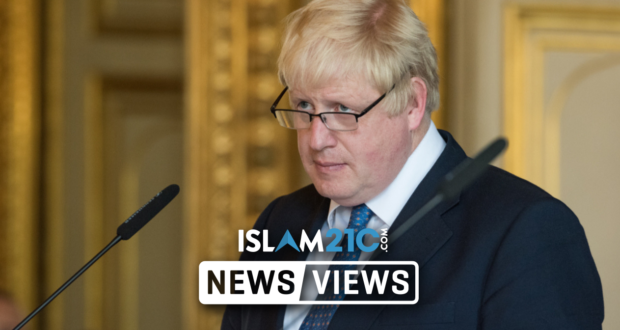 British prime minister Boris Johnson has been urged to honour his commitment to launch an independent investigation into rising Islamophobia in the Conservative party, after ministers agreed to downgrade such an investigation into general racism.

Johnson made the pledge during a debate on the BBC, in which rival candidate and chancellor of the exchequer Sajid Javid proposed the idea of an external investigation into Islamophobia. Other candidates, including former foreign secretary Jeremy Hunt and current cabinet minister Michael Gove, also agreed to an investigation.

“Well, I took it up with Saj (Sajid Javid) afterwards and he said that actually, if I understand it correctly, what we’ve committed to is a general investigation into all types of prejudice and discrimination, including antisemitism,” Johnson said, adding that the idea of an investigation sounded good at the time when Javid proposed it. [1]

The Conservatives have been routinely criticised for not doing enough to resolve the issue of Islamophobia within the party. Many party members, MPs and the prime minister himself, have made outright Islamophobic statements and have failed to apologise for making them. Indeed, those members and councillors who were suspended were quietly reinstated back into their positions.

“Boris Johnson promised to set up an inquiry into Islamophobia in the Conservative party but it’s all gone very quiet. Muslim people will not be reassured by this government minister dodging the question,” said Naz Shah, the Labour shadow minister for qualities.

A poll, conducted by YouGov and Hope Not Hate, found that more than two thirds of Conservative party members believe that certain areas of the UL are under Sharīʿah law. Moreover, half the party believe that Islamophobia is a general issue but only 8% believe that it is a problem within the party. [2]

The online survey of 864 Tory members also found that 45%of party members think certain areas of the country are no-go areas for non-Muslims with 40% arguing that there should be a reduction in the number of Muslims entering the UK 39% also believe that “Islamist terrorists” reflect widespread hostility to Britain.

Senior Tory member of the House of Lords Sayeeda Warsi called out her party for reinstating members who were previously suspended for making Islamophobic comments and allowing them to run in local elections. She has received death threats online for coming out and publicly raising these issues, one of these threats she faced down was on 13th April 2018 during the so-called ‘punish a Muslim’ day when violent literature was sent out to Muslim MPs threatening attacks and violence against them.

Earlier this year, 14 members of the Conservative party were suspended for posting Islamophobic comments on a Tory Facebook group, amongst many that read “turf all Muslims out of public office”, [3] another asking “to get rid of all mosques” and members attacking home secretary Sajid Javid and warning against “voting for Islam”. These posts were collected and archived by a Twitter account that documents Islamophobic rhetoric in the Conservative party.

Similarly, two Tory councillors resigned from the party after being found to have endorsed Islamophobic posts on their Facebook accounts. Len Milner and Chris Smith had liked a cartoon that depicted London mayor Sadiq Khan being beheaded by the queen. Another councillor has been suspended for retweeting a Twitter post that praises former English Defence Leader Tommy Robinson, a well-known anti-Muslim ‘activist’.

The recent suspensions and resignations aren’t the only examples of Islamophobia within the party. In November 2018 former foreign secretary Boris Johnson compared Muslim women who wear the hijab and burqa as “letter boxes and bank robbers” in an article in the Daily Telegraph and was found to have not committed any wrong doing by an internal inquiry conducted by the party. [4]

Last month, Tory MP, Henry Smith, claimed that he had “never come across any of that in the Conservative party” in a debate on the BBC Politics Live show that was discussing Islamophobia and the government’s response to the matter. [5] Warsi said that Smith’s denial of Islamophobia within the party showed that he was “refusing to confront the issue”.

In the last three years, there has been a sharp rise in Islamophobia and anti-Muslim hate crime in the UK, with 2017 having a record number of attacks against Muslims. In 2018 there were over 1,200 reports of Islamophobic attacks, a 26% surge from the previous year. Islamophobic incidents have risen significantly due to a number of factors such as Brexit and the proliferation of far-right groups manipulating peoples’ misconceptions on immigration and faith.

2019-07-29
Muhammad Mussa
Previous: US backed YPG inhumanely torture Arab family in Syria’s Manbij
Next: What Can YOU Do for Tuqa?