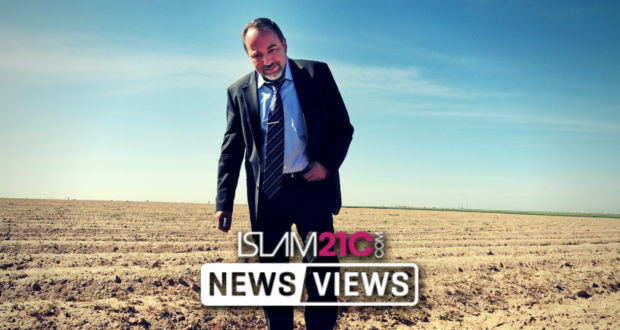 Extremist Zionist politician and leader who voiced his inspiration from atomic bombs dropped on Japan to make occupation “unnecessary”[1] has resigned, putting his government in disarray.

The former nightclub bouncer turned so-called “defence minister”, Avigdor Lieberman, resigned after his fighters produced what has been called an “embarrassing spectacle of incompetence” Sunday night, as a covert ‘special operation’ three miles into Gaza was scuppered by Gazan soldiers.[2]

In what was supposed to be a calculated and measured ‘response’, occupying fighters went on to pound Gaza with more than 150 airstrikes, destroying up to 80 institutional facilities, including a hotel and civilian buildings according to sources inside Gaza, inviting over 400 rockets into the bordering occupied territories.[2]

During the escalation, a bus that had been carrying Zionist fighters was obliterated by an anti-tank missile fired from Gaza for which the army tried to evade responsibility after driving into the naked line of fire.[3] [4] Palestinian soldiers waited until militants on board the bus disembarked in what was seen as a restrained response, such to show capability to inflict damage but to avoid a full-blown escalation. One Israeli militant was seriously wounded in the attack.

The #Palestinian resistance movement, Hamas has released video footage of an operation carried out against Israeli occupation soldiers in the Jabalia area in the besieged #Gaza Strip. The group's armed military wing, the Ezzedine al-Qassam Brigades says it used a Kornet man-portable anti-tank missile to target the military bus. It further notes that the operation was in retaliation to Zionist Israel's Sunday invasion and attack on Gaza in which seven Palestinian fighters were killed.

Russian-born Lieberman, who described elected Arab members of the Israeli Knesset as “terror collaborators”, calling for their execution,[5] is no stranger to similar controversies. His resignation comes in protest to the ceasefire deal ratified again on Tuesday after Israel breaking it on Sunday, ending the worst escalation against Gaza since the 2014 attack that killed 2,200, the majority of whom were civilians.

On Tuesday evening, thousands of Gazans took to the streets, celebrating the cessation of hostilities and the success of the resistance in defending against one of the largest militaries in the world. Meanwhile in the bordering occupied town of Sderot, hundreds of Israelis burned tyres and clashed with police, protesting the pause of Israeli airstrikes. Further protests are planned to take place today.[6]