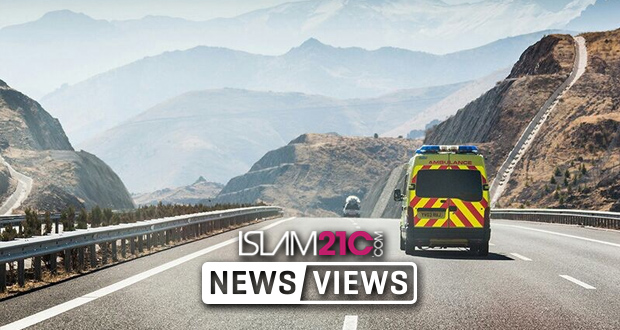 The coalition of charities, ‘Unity Convoy’, that aims to send ambulances from the UK into Syria has reported that two civilians, including a medic, were killed when an airstrike hit its ambulances in Syria. The strike also injured ten others, amidst an increase in the Syrian Regime’s and its allies’ aerial bombardment of war-torn Idlib City in northern Syria.

Images from war-torn Idlib City in northern Syria shared by Unity Convoy show six of the British ambulances that the charity operates—donated by Britons—to provide relief for the civilians of Syria buried in the rubble and destroyed. The ambulances formed part of the world record-breaking convoy of 100 ambulances that were driven to Syria from the UK by a coalition of charities under the umbrella of Unity Convoy.[1]

The ambulances have been able to save hundreds of lives in a part of Syria that has been dubbed “the new Aleppo” because of the humanitarian catastrophe that has unfolded as a result of intense fighting on the ground and aerial bombing.

“This horrific targeting of innocents further proves the need for foreign aid. Our internal aid has been cut off and we are completely reliant on the outside world. We are calling on the world to keep on giving.”

Official Unity Convoy spokesperson, Alim Shamas said that “the direct bombing of our ambulances is an outrage.”

“The Syrian civilian residents have been deprived from access to medical care and other basic services. Where national authorities have failed to protect civilian populations in this regard, humanitarian organisations need to intervene to help protect the rights of those affected.”

“Each time an ambulance is destroyed, whether it is targeted or in an indiscriminate attack on civilian areas, it deprives Syrians of another lifeline.”

Unity Convoy today called on the British public to continue to support aid efforts in Syria will continue to fundraise for essential medical supplies and raise awareness of the humanitarian situation in Syria.

[1] 1. Unity Convoy is an independent body made up of a consortium of charity leads sharing the vision of ‘unity’ in humanitarian work. United to deliver Ambulances to Syria. Further updates and articles will be available for view from the official Unity Convoy website www.unityconvoy.com.

Editor
SYRIA
Share. Facebook Twitter LinkedIn Email Telegram WhatsApp
Previous ArticleGirls in hijab questioned by Ofsted inquisitors should tell them to get lost and mind their own business
Next Article This ‘World Children’s Day’ there were 300 Palestinian children in Zionist jails