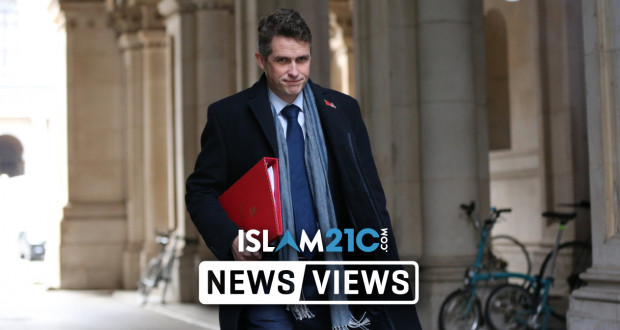 The human rights advocacy organisation CAGE finds itself embroiled in a bitter dispute with the British government. The controversy arose after the organisation announced that it would be initiating a judicial review of the guidance issued to schools by the Secretary of State for Education, Gavin Williamson. This so-called guidance was provided after the protests and ensuing events surrounding the threateningly impending evictions in the East Jerusalem neighbourhood of Sheikh Jarrah. [1] [2]

In a lengthy statement, CAGE argues that Williamson’s move effectively blocks pupils from expressing views that call out ‘Israel’ for its oppressive acts towards the Palestinians.

“The Minister’s intervention, although cloaked in concerns around anti-semitism, had the impact of censoring views in schools that challenge the state-sponsored narrative on Israel. The aim was to set a fixed template within which pupils’ discussion on Israel-Palestine should be conducted. This was further accentuated by his suggestion that schools interact with specific named openly pro-Israel organisations to deliver a ‘balanced’ presentation of the issue.” [3]

“The instruction issued by the Secretary of State has had the effect of not only stifling the legitimate political views of Muslim students in schools across the country, but also justifying their securitisation for simply demonstrating solidarity with the victims of Israeli apartheid.” [3]

Williamson wrote an open letter to head teachers at the end of May, requesting them to enforce “political impartiality” on the topic of the decades-long Israeli-Palestinian conflict. Yet, he has been accused of clear discrimination against students, who may wish to express their views on the matter.

Williamson justified his decision by citing the purported rise in antisemitic abuse in schools following the globally covered Sheikh Jarrah protests and subsequent raid of Islam’s third-holiest site, al-Masjid al-Aqsa. He claimed that his objective is to introduce a “balanced presentation of opposing views” when discussing ‘Israel’ and Palestine.

The Conservative MP for South Staffordshire, Williamson is a failed former Defence Secretary. He was unceremoniously relieved of his post in early 2019, after sensitive information outlining the involvement of Chinese tech firm Huawei in the UK’s planned 5G infrastructure was leaked to the media. Downing Street said at the time that then Prime Minister Theresa May had “lost confidence in his ability to serve”. [4]

In Williamson’s May 28 letter to school chiefs, a number of demands were made, including the following:

“Schools should ensure that political expression by senior pupils is conducted sensitively, avoiding disruption for other pupils and staff.

“It is unacceptable to allow some pupils to create an atmosphere of intimidation or fear for other students and teachers.” [5]

I have written to headteachers today, following the concerning increase in antisemitic incidents in schools.

Discrimination and racism in any form should never be tolerated in education or in wider society. pic.twitter.com/bGz7a9PXqe

In its press release, CAGE argues that Williamson’s letter “amounted to censorship of political dissent in schools and discriminated against students by infringing their right to freedom of expression. The Minister’s advice also leads schools to violate their legal duty for impartiality.” [3]

The managing director of the advocacy and outreach organisation, Muhammad Rabbani, emphasised the importance of defending freedom of expression:

“Muslims and others across the globe have expressed their solidarity with the people of Al-Aqsa, those facing forced dispossession of their homes in Sheikh Jarrah and the besieged Gaza strip. In response the government has sought to censor discussions in classrooms and exert control over any political activity in schools. This is, fundamentally, a matter of freedom of expression.

“This case will seek to establish that it is not the function of the executive to choreograph political discussions within schools in the manner of autocratic regimes. This violates the tradition and legal requirement of impartiality that has been the bulwark against state propaganda. We should respect the experience and judgment of school leaders and not politicians seeking to foment ‘culture wars’.” [3]

The British government has taken a disturbingly lax approach with ‘Israel’, even after the ongoing fallout from the cyberarms firm NSO Group and its now infamous Pegasus spyware. The spyware scandal was revealed by The Guardian and 16 other media partners. It outlined that the invasive technology was used to target over 50,000 individuals from around the world, including French President Emmanuel Macron and Pakistani Prime Minister Imran Khan. In addition, prominent Muslims had also been targeted by the Israeli spyware. These include the late executive director of the UK-based Saudi Arabian human rights movement ALQST for Human Rights, Alaa al-Siddiq (raḥimaha Allāh), and the slain Saudi journalist and author, Jamal Khashoggi (raḥimahu Allāh). [6] [7]

A spokesman for the Foreign, Commonwealth and Development Office (FCDO) issued the following statement regarding the Pegasus leaks:

“It is vital that everyone uses cyber capabilities in a way that is legal, responsible and proportionate to ensure cyberspace remains a safe and prosperous place for everyone.

“We speak regularly with partners and work closely with allies to tackle threats, improve resilience and raise any concerns where they arise.” [8]

In addition to Williamson’s shambolic record while working in the Ministry of Defence, he also weathered a political storm last July at the Department for Education. Tens of thousands of GCSE and A-level students were handed results based on a new yet ill-fated grading system. This resulted in many students being uncertain as to whether they would be accepted into their first-place choices through the Universities and Colleges Admissions Service (UCAS). Williamson was forced to backtrack, and ultimately released an apology, claiming that he was “sorry for the distress this has caused”. [9]