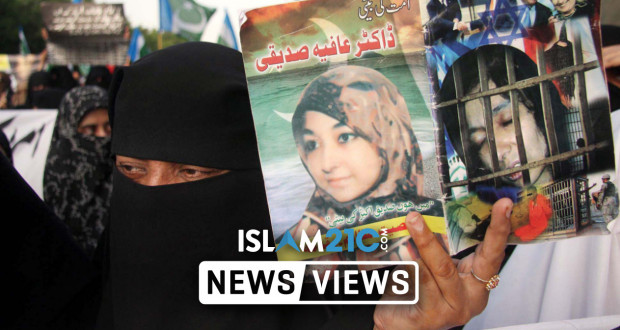 Dr Aafia Siddiqui has made an urgent plea for support after being violently assaulted by an inmate at the Federal Medical Center, Carswell, where she is currently serving an 86-year sentence. The internationally renowned Pakistani neuroscientist studied at the prestigious MIT and Brandeis universities during the 1990s, attaining a bachelor’s degree in science and following up with a PhD. Under mysterious circumstances, she was arrested and transferred to the United States, where she was tried and convicted. Her sentence was based on spurious charges, which included “attempted murder” and “assault on US officers and employees”. [1]

Dr Siddiqui has spoken of her trauma and severe pain after being attacked by a cellmate, who hurled a drinking mug laden with hot coffee into her face. The shocking development provides yet another tragic twist in the ongoing hellscape that Dr Siddiqui continues to endure.

“Aafia Siddiqui’s case remains one of the most troubling in the sordid history of the ‘War on Terror’. As events in Afghanistan – where so much of Aafia’s case began – unfurl with such speed, we need to ask if Pakistani authorities will seek her repatriation while she’s still alive, or only after she’s in a body bag.

“It is time this chapter of Aafia Siddiqui’s life was closed. She needs to go home and be with the children she never saw grow up.” [1]

A 49-year-old former neuroscientist, Aafia Siddiqui was arbitrarily abducted in Pakistan in 2003, reportedly at the behest of American forces. Even her six-month-old child was detained. She has consistently stated that she was severely tortured by her captors while being imprisoned for seven years in the notorious US detention facility found in Bagram, Afghanistan. Indeed, the British journalist Yvonne Ridley identified her and referred to her as the “Grey Lady of Bagram”. As the sole female prisoner at Bagram, Dr Siddiqui was said to have kept detainees awake “with her haunting sobs and piercing screams”. [2]

The US for many years had denied knowledge of her whereabouts. It instead claimed that she somehow resurfaced in Afghanistan in 2008, where she was shot by US soldiers. Without logical explanation, in 2010 she was then tried and convicted of two counts of attempted murder, armed assault, using and carrying a firearm, as well as three counts of assault on US officers and employees. Throughout the trial, no physical evidence was produced against Dr Siddiqui. [3]

After being given an 86-year sentence by Judge Berman of the United States District Court for the Southern District of New York, Dr Siddiqui turned to members of the public, who were in the gallery. She then retorted, “This verdict [is] coming from Israel and not from America.” [3]

Today, she remains in Fort Worth prison, and has reportedly been put into administrative solitary confinement for an unspecified period of time. It should be noted that Dr Siddiqui is a practising Muslim, a ḥāfiẓah of the Qur’an, and a devoted mother who was robbed of her freedom after a sham trial full of spurious claims was held against her. She has become an emblematic figure in the so-called War on Terror, as her case has captivated the entire world. This was because countless aspects of the criminal case against her were incoherent, inconsistent, and inconceivable. As an Amnesty International public statement observed in 2010, despite the US alleging that she fired upon American troops, Dr Siddiqui was the only one who suffered gunshot wounds in the alleged altercation. [4]

Despite all the pain and suffering that Dr Siddiqui has endured – and continues to suffer – at the hands of the Americans and those who provided material support in her abduction and criminal sentence, she has not given up hope. Instead, she remains “determined, hopeful and full of faith in Allah”. [5]

Aisha Farooqui, former Consul General at the Consulate General of Pakistan in Houston, noted the following in a May 2018 report after her visit to Dr Siddiqui at the Federal Medical Center, Carswell:

“For a practising Muslim woman to be incarcerated in a facility where there was an existential threat of being raped and sexually abused repeatedly is an untenable situation and should not be allowed to continue.

In spite of all this, I found Dr Aafia determined, hopeful and full of faith in Allah and Pakistani people that there will be help sent for their daughter specially and that sooner rather than later she would get out of the prison.” [5]