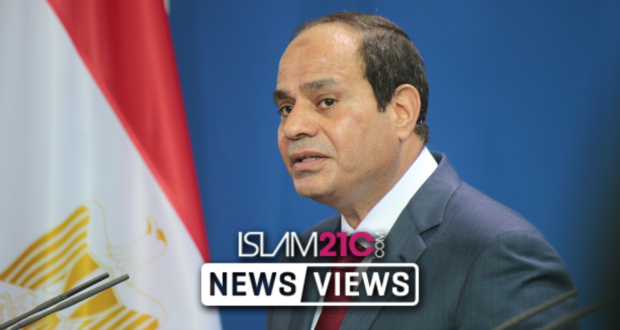 CBS, the US TV network, will broadcast its interview with Egyptian president Abdel Fattah el-Sisi this Sunday after rejecting a request from the Egyptian envoy not to air the broadcast.

During the 60 Minutes programme the Egyptian president was questioned on his relationship with Israel, the mass detainment of political prisoners and the violent and deadly crackdown on protestors following the 2013 military coup.

Although a full transcript has not been released by CBS, Sisi confirmed that Egyptian security forces were collaborating with Israel in battling militant groups within the Sinai Peninsula. Sisi told CBS correspondent Scott Pelley:

“That is correct… We have a wide range of cooperation with the Israelis.” [1]

The president was also asked about reports published by human rights organisations which reported that 60,000 people have been imprisoned and tortured since he seized power in 2013. [2]

Sisi responded by saying, “I don’t know where they got that figure. I said there are no political prisoners in Egypt. Whenever there is a minority trying to impose their extremist ideology we have to intervene regardless of their numbers” [3]

The former defense minister was also asked by CBS if he had given the order to fire on protestors in 2013 that lead to a massacre of at least 1150 Egyptians demonstrating against the military coup that overthrew Egypt’s first democratically elected Parliament and President.  [4]

“Egyptian Forces carried out one of the world’s largest killings of demonstrators in a single day in recent history.” [5]

“This wasn’t merely a case of excessive force or poor training. It was a violent crackdown planned at the highest levels of the Egyptian government. Many of the same officials are still in power in Egypt, and have a lot to answer for.”

However, Sisi simply claimed that: “there were thousands of armed people in the sit-in for more than 40 days. We tried every peaceful means to disburse [sic] them”. [6]

Following the interview, the 60 Minutes programme was contacted by the Egyptian embassy and requested that CBS not broadcast the interview as the questions asked by the broadcaster “were not the kind of news [Mr Sisi’s] government wanted broadcast”. [7]

Sisi has made attempts to legitimise his regime through successive rigged elections and the arrests of notable scholars and political activists under the pretence of “fighting extremism” which helps his justification of having 60,000 political prisoners. [8]