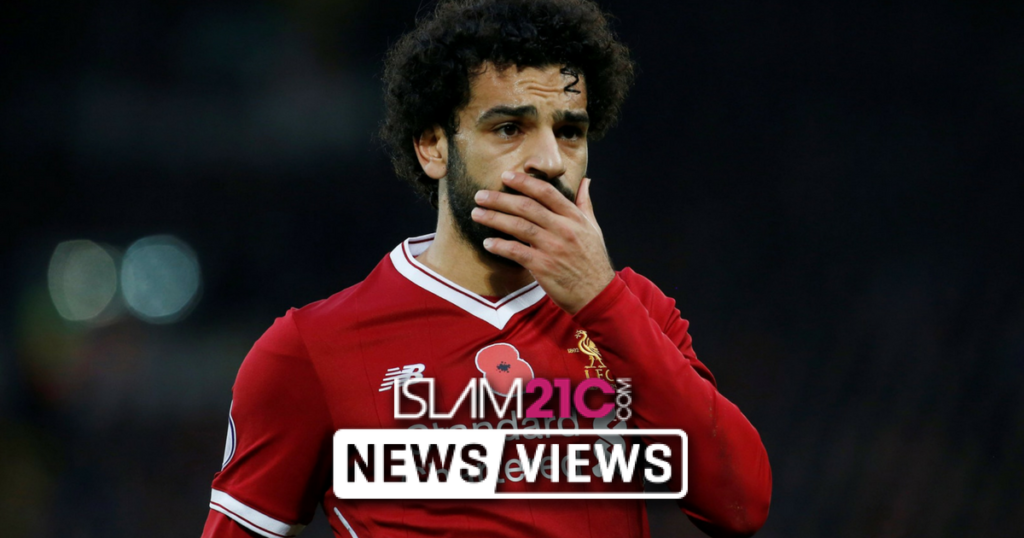 A certain Egyptian Muslim is ripping up the record books taking the Football world by storm. Setting fire to playing fields across Europe and striking fear into the hearts of defenders across Europe. He is of course none other than our beloved brother Mohamed Salah.

The Liverpool star has been forced off the pitch in the first half of the Champions League final after a tackle by Sergio Ramos. He tried to continue playing but the tackle which made Salah land awkwardly on his shoulder caused him to collapse again.

Born in Nagrig, Egypt, the diminutive forward has become a giant amongst his peers not only with his skill but also with his humility and conduct. He has also won a staggering 35 individual accolades in his debut year, including the coveted PFA player of the year, Football Writer’s Association Footballer of the Year, Golden Boot and tipped to win the most prestigious Balon d’or beating Ronaldo and Messi.[1] However, Salah celebrates each one of his goals by making prostration to Allāh (subḥānahu wa taʿālā) and then raising his index finger up towards the sky in the shahadah. An observant Muslim, he has been pictured reciting the Quran and has even named his daughter after the holiest city on earth, Makka.

Salah is an example of how Da’wah can take many forms. Indeed, Salah is an illustration of how powerful a Muslim who is excelling in his profession whilst remaining true to his faith can be. Salah’s is a salient reminder that a Muslim’s conduct is one of the best forms of Da’wah. Having been taken into the bosom of the Anfield faithful, the stands were rocking to the chant:

If he’s good enough for you

He’s good enough for me

If he scores another few

Then I’ll be Muslim too

Sitting in a mosque

That’s where I wanna be”

Mohamed Salah and his team mate Sadio Mane attend the local Mosque to offer Jumu’ah and kindly pose for photos with members of the congregation. It is understood that Salah and Mane have observed all of their fasts in Ramaḍān whilst preparing for the greatest match of their career – the Champions League Final tonight. It may be, whilst travelling in Kiev, they choose to take the dispensation not to fast.

Salah, a supporter of the Palestinian cause

Whilst the British media would like to present Salah as apolitical, he is anything but. As a player of FC Basel, Salah was due to play against Maccabi Tel Aviv in 2013. Before leaving for the match Salah told Swiss media he considered himself travelling to “Palestine and not to Israel as they claim” and that he had “agreed with the board that I will pray in Al-Aqsa Mosque.” Mohamed Salah, the fearless winger said he wanted to help his team-mates beat Maccabi Tel Aviv so that “the occupant’s flag won’t be raised anymore in the competition.” When Salah scored in the match he duly prostrated to Allāh to jeers for the Israeli crowd.[2]

Mane: The son of an Imam and an observant Muslim

Sadio Mane is another successful footballer and proud Muslim. Born in Bambali, a small town in Senegal, the son of the local Imam, Mane is doing Islam and his family proud. When asked if he drank alcohol he replied: “I won’t touch alcohol” and explained the importance of Islam to him: “Religion is very important to me. I respect the rules of Islam and I pray five times a day, always.”[3]

Role-models for the youth

In a time when our youth are distracted by a myriad of temptation, Mohamed Salah, Sadio Mane and their like are excellent role models. The premiership footballers show that despite having the world and all its seeming glory at their feet, they appreciate that the ultimate pleasure is in pleasing Allāh (subḥānahu wa taʿālā), something too many celebrities learn the hard way. Our brothers Mohamed Salah and Sadio Mane make us proud because they are so comfortable with their faith.