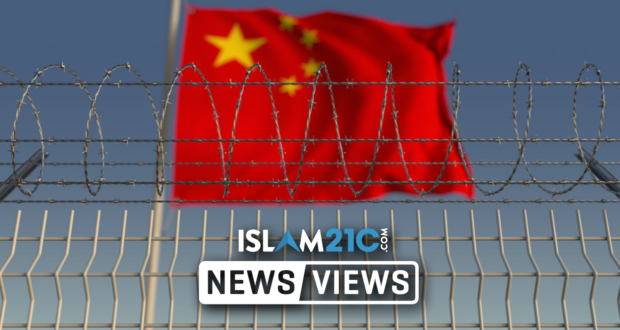 China orders Islamic symbols be taken down in Beijing

The Chinese government has ordered ḥalāl restaurants and food stalls in Beijing to remove all Arabic symbols and alphabet as part of its national campaign of Sinicization, aimed at forcing ethnic minorities to conform to Chinese culture and traditions.

Authorities in the Chinese capital travelled to various ḥalāl restaurants and ordered its owners and managers to either remove or cover the Arabic script that said ‘halal’ and symbols, such as the moon and crescent. According to sources, authorities visited a number of restaurants throughout the capital.

“They said this is foreign culture and you should use more Chinese culture,” said one restaurant manager who chose to remain anonymous. [1]

This latest move represents a marked shift in the communist party’s attempts at wiping out the unique Islamic identity that Muslims have had for a millennium in China and its efforts at imposing mainstream Chinese culture on Muslims and other ethnic and religious minorities in the country.

According to Reuters, some restaurants had to replace the traditional Arabic signs with the Chinese translation (qing zhen) whilst others had to cover them with tape. [2] The move according to the government is part of a national directive.

The banning of religious and Arabic symbolism follows the destruction of mosques in the Muslim majority Xinjiang province as well as other provinces throughout the country. Many of these mosques had been in existence for centuries and were rich in history and importance for those who frequented them.

The Chinese government argues that such directives are aimed at stamping out supposed religious extremism. However, activists and academics argue that these forms of symbolism represent foreign influences for the government, and such will make it difficult for them to control religious groups and especially Muslims.

“Arabic is seen as a foreign language and knowledge of it is now seen as something outside of the control of the state,” said Darren Byler, an anthropologist at the University of Washington.

“It is also seen as connected to international forms of piety, or in the eyes of state authorities, religious extremism. They want Islam in China to operate primarily through Chinese language.” [1]

There are around 1,000 ḥalāl restaurants and shops in Beijing, most of which are located in the Muslim quarter as well as other neighbourhoods.

Meanwhile, as many as one million people – roughly 7% of Xinjiang’s Muslim population – have been incarcerated in an ever-expanding network of “political re-education” camps, according to both US and UN officials.

2019-07-31
Muhammad Mussa
Previous: China claims most Muslims in controversial camps have “returned to society”
Next: The VEIL slips over abusive pride marchers