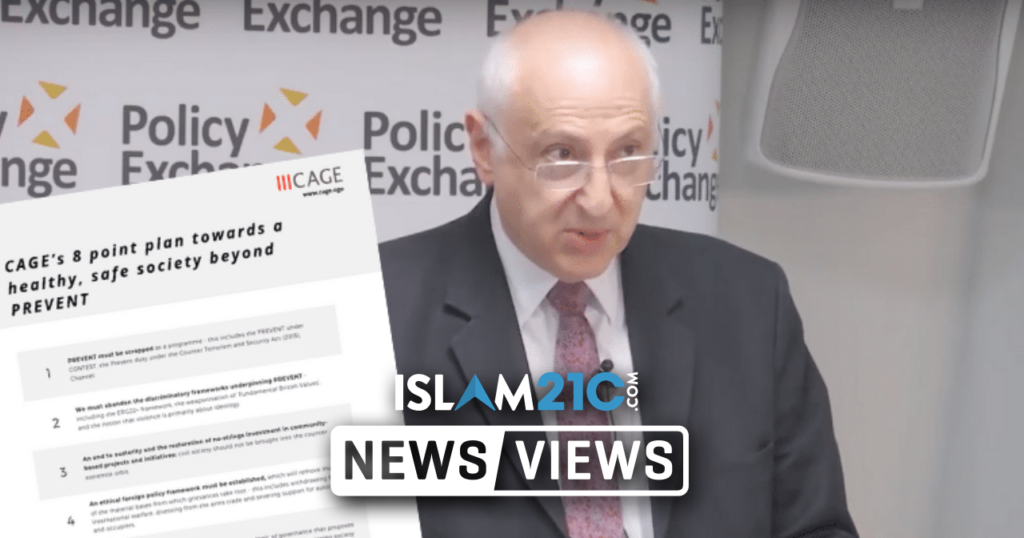 According to advocacy group CAGE, the published Terms of Reference (ToRs) for the upcoming ‘independent’ review of the toxic Prevent strategy have confirmed that the entire process is “geared towards providing a face lift to this toxic policy”.

The British government appointed Lord Carlile as its new ‘independent’ reviewer of the contentious counter-extremism strategy known as Prevent.

In fact, the supposed ‘independent’ reviewer is on record saying he is biased towards the strategy. Human rights groups have argued that in doing so he is undermining his position as he told parliament he was ‘somewhat biased’ towards the toxic strategy. [1]

In early August, a group of 10 human rights organisations and community groups, including the MCB, Liberty, and the Index on Censorship, wrote a joint letter to security minister Brandon Lewis condemning the Government for appointing Lord Carlile without public consultation. The group accused the Government of “shrouding the process in secrecy” and making the appointment behind closed doors. [2]

In the joint letter the group said:

“In combination, these omissions do not inspire confidence that the government is seeking to appoint a reviewer with the expertise and independence required to thoroughly scrutinise the logic, remit and impact of Prevent,”

CAGE further added that Lord Carlile’s letter to the Guardian in response to criticism highlights that any engagement with the review will only legitimise the racist and Islamophobic policy.

Many groups have criticised, opposed, and called for the repeal of the Prevent strategy. These groups include the National Union of Students (NUS), Federation of Student Islamic Societies (FOSIS), University and College Union (UCU), National Union of Teachers (NUT), several faith groups, academics, and activists. [3]

In response to the published terms of reference, CAGE’s spokesperson, Cerie Bullivant said:

“The published terms of reference for the Prevent review make clear that it will be a PR exercise intended to censor the voices and experiences of those facing the brunt of this toxic policy.”

“We call upon civil society to reconsider any value of engagement with the review process, to rethink what it means to respond to the problem of violence and reconceptualise how as a society, we can live together without the need of a security state bearing down on our rights and freedoms.”

Muslims comprise approximately 5% of the United Kingdom [7] and less than 5% of the perpetrators of “successful and foiled” terror plots, [8] yet they are vastly overrepresented in the counter-terrorism matrix — from Prevent referrals to Schedule 7 stops and searches to “terrorism” convictions. Not only does this lead to unjustified fear and panic from the broader population, it also contributes to the alienation and disenfranchisement of many young or mentally vulnerable Muslims. [9]

This is one of the reasons that an increasing number of researchers and activists have been warning that Prevent is not just ineffective but actually counterproductive. A sense of alienation, disenfranchisement, and experience of racist double standards have long been significantly empirical causal factors involved in the likelihood of some people to be drawn into political violence and terrorism, and emphatically not the non-violent beliefs and opinions — whether ‘radical’ or not — that the Prevent programme has been focusing its attention on. [10]

[7] According to the 2011 Census, Office for National Statistics.