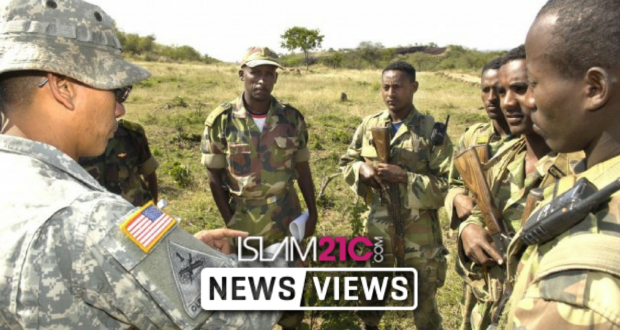 Civilians killed as part of Special Forces Operation in Somalia

US special forces have been caught up in a scandal over the killing of Somali civilians in the village of Ma’alinka, which is 37 miles from Mogadishu. According to local villagers, 5 Banana farmers were killed in a Somali led operation in which US Special Forces were there to “advise and assist”.[1]

There are several hundred US troops in Somalia whose primary role is to enhance the Somali military’s ability to fight Al-Shabab. US soldiers routinely accompany their Somali charges on operation and, as such, have been accused of complicity in the killing of these unarmed farmers.[2]

“It was past midnight and all was peaceful when the shooting began. Nobody fired at them as the people there were not armed. They (Somali or US forces) shot the victims from close range and killed them.”

“forces came down from a helicopter and started shooting the people in the farm.”[3]

A mortuary attendant who inspected the dead bodies said four of the men had died from bullet wounds to the back, indicating that the victims were attempting to escape from the Somali-US soldiers.

US airstrikes in Somali have seen a surge under the Trump administration. In the final 6 months of 2017 alone there were 34 US airstrikes in Somalia, the same number as in the entirety of 2016. However, rather than killing Al-Shabab militants, it is Somali civilians who have paid the price with scores of dead civilians. This included seven members of a family and their young children who were killed in a US led airstrike in Southern Jubaland in August.[4] In addition to the loss of life, the airstrikes have caused devastation to livestock and agricultural infrastructure on an already strained people.[5]

The sudden increase in airstrikes in Somalia follows the relaxation of guidelines by the Trump administration which had been in place to protect civilian life. In addition to US forces, the Kenyan army are said to have also conducted strikes in Somalia with the three attack helicopters it has contributed to Amison: the 22,000 soldier African Union military and policing mission in Somalia.

“All those who are using military means in one way or another [in Somalia] claim that they have standards when it comes to the protection of civilians but are not translating their principles into practice. All actors could do more to protect civilians.[6]”

2018-05-21
Dr Izzadeen Chowdhury
Previous: Reports: UAE and Saudi seek to divide Yemeni island Socotra
Next: Qadā, Fidya & Kafāra: what to do when not fasting