Are you ready for our first ever NATIONAL CAMPAIGN?
Home / News / Clash in S. Caucasus: Azerbaijan fights occupying Armenian forces 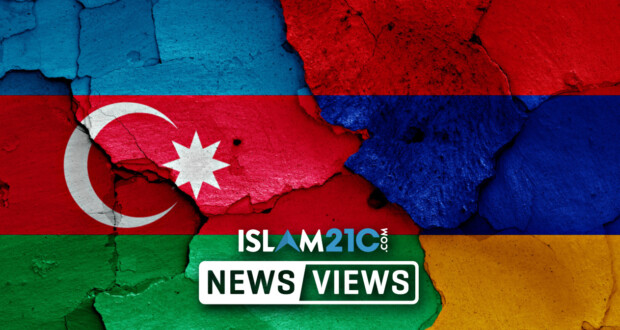 Clashes erupted again on Sunday in the Southern Caucasus between two former Soviet countries – Azerbaijan and Armenia. Azerbaijan has accused its neighbouring country Armenia of attacking civilian settlements in Nagorno-Karabakh, a region internationally recognised as part of Azerbaijan but occupied by Armenian forces since 1993.[1]

Turkey, which geographically borders both Azerbaijan and Armenia responded in the context of Armenia violating the cease-fire. Turkey and Azerbaijan often refer to themselves as brotherly nations and are of the ‘One Nation, Two States’ motto, a strong mutual sentiment which aims to foster unity transcending border lines.

“We wish Allah’s mercy upon the victims. Azerbaijan is not alone; it has Turkey’s full backing,” said Turkish Presidential Spokesperson Ibrahim Kalın [2]

According to preliminary data, 16 servicemen were killed and more than 100 were wounded since the violence erupted between the  Armenia and Azerbaijan. Both Baku and Yerevan reported civilian casualties. Azerbaijan – strongly supported by Turkish Armed Forces – has rejected claims that their attacks are targeting civilians. In a statement released by the Azerbaijan Ministry of Defence, it said:

“We officially announce that the Azerbaijan Army does not target the civilian population, civilian facilities, and civilian infrastructure. Unlike the occupying country Armenia, during military operations, Azerbaijan complies with the requirements of the regulation of international humanitarian law, including the Geneva Conventions. The Armenian army deliberately places its firing points inside and near human settlements.” [3]

The Azeri MoD has taken the Turkish approach of openly publishing aerial footages pertaining to show their armed targets of the attacks, embedded below is one such official video.

The President of Azerbaijan, Ilham Aliyev, said: “There are losses among the Azerbaijani forces and the civilian population as a result of the Armenian bombardment.” [6] President Aliyev made a clear warning that all those who use intimidation tactics against his country would regret it, continuing that he “will defend our territory and Karabakh is Azerbaijan.”[7]

The Prime Minister of Armenia, Nikol Pashinyan, also said: “We stay strong next to our army to protect our motherland from Azeri invasion.”[8] Armenia has declared Martial war and total military mobilisation following the clashes. Azerbaijan’s parliament also declared a state of war in some cities and regions. Martial law and a 9pm to 6am curfew will be introduced in Baku and several other cities and districts that are close to the Karabakh frontline.[9]

Recently, during a BBC HARDtalk with the Prime Minister of Armenia, the host had responded to Pashinyan saying:

“Under international law, your forces are a force of occupation…You clearly are not a peacemaker there”

Turkey has vowed their allegiance to Azerbaijan and have called Armenia to give up on its ‘aggression’. The Turkish President Tayyip Erdoğan went to Twitter to write: “We also call on the entire world to stand with Azerbaijan in their battle against invasion and cruelty.” Ibrahim Kalin, presidential spokesperson for Turkey, further said: “Armenia has violated the ceasefire by attacking civilian settlements… the international community must immediately say stop to this dangerous provocation.”[10]

During a recent talk by the Turkish President, he said:

“The crisis in the region that started with the occupation of Upper Karabakh must be put to an end. With the immediate abandonment of the occupied Azerbaijani territories by Armenia, the region will regain peace and tranquillity.”

There are unconfirmed reports – based on air traffic records – of Russia attempting to supply Armenia with military equipment via the Iranian airspace, as Georgia – the direct route between Russia and Armenia – had restricted the use of its airspace for this purpose.

The tension between the two nations escalated earlier in July this year after Armenian troops breached the ceasefire agreement from 1994 and attacked Azerbaijani positions with artillery fire, killing civilians and military-men including an Azeri Lieutenant General.[11][12]  Countries all over the world have pushed for the two nations to settle the conflict, but the collapse of a peace deal in 2010 and this latest eruption of violence has now caused a full-on breakout between the two countries, with [13]  The ongoing clashes are said to be the severest since 2016.

The Karabagh region had been disputed dating back to when it was part of the soviet union. In 1988, the dispute had escalated to war, by 1993, estimates puts the number killed as 30,000 people and a million displaced. [14] The occupation of Armenian backed militia of the Karabagh region has continued for nearly three decades since then.

2020-09-29
Sana Mahmood
Previous: Muslim Students – Be a Force to Be Reckoned With
Next: Genocide ruling against China could be sought by Uyghurs at UK High Court