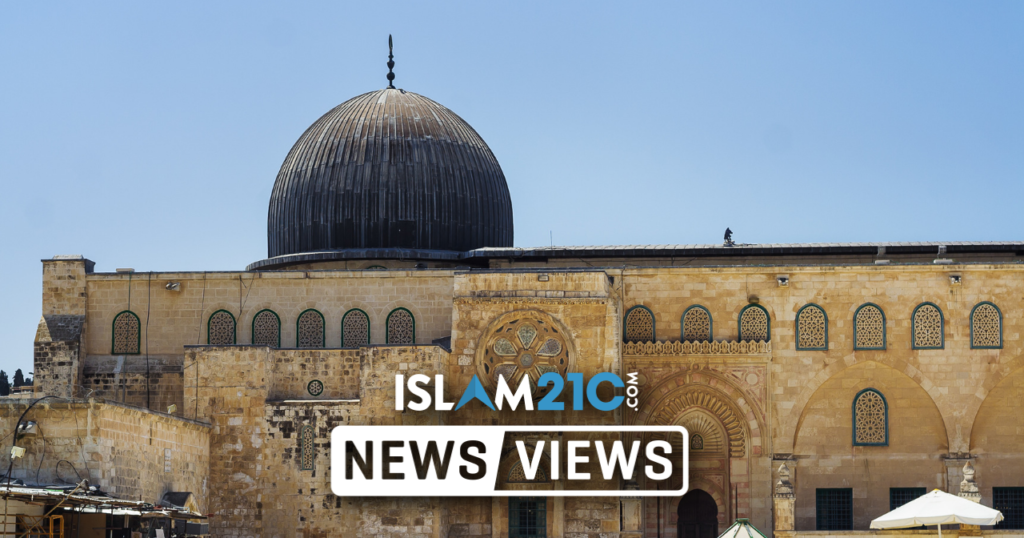 Violence erupted between Palestinian worshippers and ‘Israeli’ forces when settlers were allowed entry into the al-Qibli prayer hall of the al-Aqsa Mosque.

On Sunday morning, ‘Israeli’ forces had deployed their forces around the mosque and raided the southern ceiled building, “demanding entrance” for the hundreds of ‘Israeli’ settlers waiting to take a tour of the compound to commemorate ‘Jerusalem Day’. [1]

According to Al Jazeera’s Harry Fawcett:

“As the police had apparently decided they would be allowed in, protests by Palestinians started and forces moved in to put down the demonstrations. At that point, the ‘Israeli’ settlers were allowed to come in.” [1]

A video circulating on social media shows the Palestinians shouting “Allāhu Akbar” and throwing objects at the doorway. This caused the ‘Israeli’ forces to respond with tear gas and stun bombs.

Another video shows the mosque’s firemen cutting opening the gates of the prayer hall in order to remove locks placed by ‘Israeli’ forces.

A source, who was inside the mosque at the time, told Islam21c:

“It was madness. They attacked al-Qibli with gas bombs about two or three times. We were trapped inside for about five hours.”

It is believed that forces allowed settlers to take a tour of al-Aqsa Mosque compound, referred to as the Jewish holy site of Temple Mount by the settlers, in order to commemorate ‘Jerusalem Day’. The day is considered to be an ‘Israeli’ national holiday and marks the reunification of East and West Jerusalem after the 1967 Six-Day War, a move that is condemned by the UN and other international communities.

However, Fawcett continued to report that an ‘Israeli’ force spokesman did not acknowledge the ‘Israeli’ holiday or the end of Ramaḍān when asked why the decision was made. [1]

“The police spokesman is merely saying that access to non-Muslims was allowed today as it is on any normal day.” [1]

This is not the first time that the last 10 days of Ramaḍān have coincided with ‘Jerusalem Day’, as the two observances last coincided in 1988. However, the al-Aqsa mosque was closed to ‘Israeli’ settlers back then.