Are you ready for our first ever NATIONAL CAMPAIGN?
Home / Current Affairs / Condolences upon the passing of Dr Allamah Khalid Mahmud Sahib, one of the UK’s senior Muslim scholars 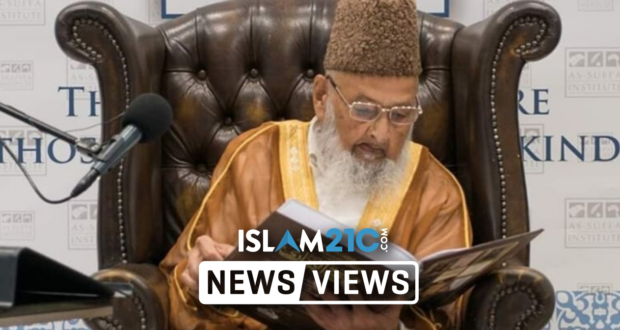 Condolences upon the passing of Dr Allamah Khalid Mahmud Sahib, one of the UK’s senior Muslim scholars

The Islam21c team would like to extend their sincerest condolences upon the passing of Dr Allamah Khalid Mahmud Sahib to his family, community, and the Muslim Ummah at large. May Allāh (subḥānahu wa taʿālā) have mercy on him.

Dr Allamah Khalid Mahmud Sahib was a senior Muslim scholar and was among the first Ulamā’ to have settled in the UK, dedicating his life for the service of Islam, promoting it and protecting it.[1]

In a statement of condolence released by the Muslim Judicial Council of South Africa, the First Deputy President, Moulana Abdul Khaliq Allie, stated:

“As a minority Muslim community at the southernmost tip of Africa, and at a time when Islam was in danger of being distorted, Dr. Allamah Khalid Mahmud (Rahimahullah) stood in defence of Islam and for that we are eternally grateful. His contribution, to a now well established and strong Muslim community in South Africa will weigh significantly on his scale of good deeds on the Day of Judgement.”

During his decades of service, the Sheikh established an extensive network of students as well as educational institutions. He is considered one of the main students of Sheikh al Ḥadith Muhammad Zakariyya al-Kandhlawi, a prominent Sunni Hanafi Hadith scholar of the Deobandi school of Islamic thought in India.

The Sheikh was an expert in several fields of Islamic knowledge, including Islamic jurisprudence, hadīth, and comparative religions. He established the Islamic Academy in Manchester, England and held a number of key positions on the Shariah Boards of prestigious Islamic institutions. He also served as Justice of the Supreme Court of Pakistan.

He is said to have authored over 50 books and was best known for his works pertaining to Khatam al-Nabiyyīn, the Seal of the Prophets.[2] Some of his other works include:

The Sheikh was also well-known for his powerful debating skills, debating and challenging some of the biggest personalities of many deviant sects. In fact he is said to have participated in his first debate at the tender age of 12 with a senior Qadiani much older than him.

Sheikh Dr Allamah Khalid Mahmud Sahib was over the age of 90 and passed to meet his Lord (subḥānahu wa taʿālā) on Thursday 14th May 2020. He reportedly died of a respiratory illness which he contracted whilst he was recovering in hospital from a hip bone operation in Manchester, United Kingdom.[3]