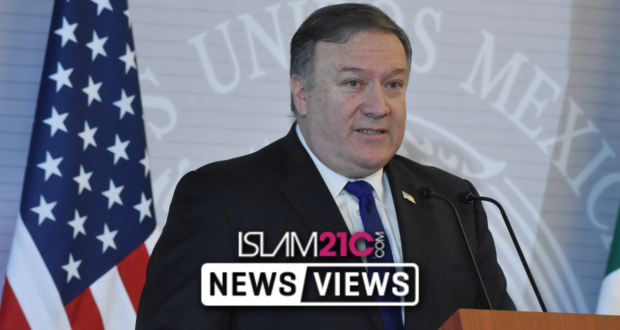 Controversial speech by US Secretary of State resurfaces on the internet

The US Secretary of State, Mike Pompeo has been caught up in fresh controversy after a video of his speech in 2015 has resurfaced on the internet and gone viral.[1] Whilst speaking to a Church congregation, the current Secretary of State, expressed his opposition to multiculturalism among other things.

During the speech Pompeo states:

“We will fight these battles, it is a never-ending struggle…until the rapture.”

America’s chief diplomat, Pompeo has previously endorsed a “Holy War” between Christians and Muslims and believes the fight against terrorism is a war between Islam and Christianity. [2] Pompeo said:

“This threat to America is from people who deeply believe that Islam is the way and the light and the only answer.”

He went to add:

“They [Muslims] abhor Christians, and will continue to press against us until we make sure that we pray and stand and fight and make sure that we know that Jesus Christ our saviour is truly the only solution for our world.”[3]

As CIA director, Pompeo was criticised for allowing his “religious convictions” to “bleed over into the CIA.”[4]

The rapture is an eschatological concept common among evangelical western Christians, and has multiple variations in belief but, at its core, is the belief that there will be an “end of days” war, Jesus Christ will return, and “true” Christians will ascend to heaven leaving the rest of humanity to be punished on earth.

According to the BBC, Pompeo as well as the Vice President Mike Pence, Education Secretary Betsy DeVos, Attorney General Jeff Sessions and no fewer than a further six members of US Cabinet sponsor and attend a weekly Bible studies group in the White House.[5]

It is said that this is the first time in more than 100 years in which the US Cabinet has decided to hold a Bible study group. The group takes place on a weekly basis where some of the world’s “most powerful” individuals get together and discuss the Bible every Wednesday.

The weekly Bible study group calls itself “historical evangelicalism” and Biblical scholars say that it shares the end of times message of rapture theology in its statement of faith and founder Ralph Drollinger’s own published lessons.[6]

These religious views, which some may call fanatical, are not merely extreme theoretical ideas without practical consequences. Rather they were key to the relocation of the American embassy from Tel Aviv to Jerusalem, as one of the central tenants of the rapture is that all of Jerusalem must be “returned” to the Jewish people, after which the rest of the world must go to war.

Greg Carey, a Professor of the New Testament at Lancaster Theological Seminary said Israel “is at the centre of the end of history” and “History will culminate with this great battle.”[7]

It was therefore no coincidence that Robert Jeffress, an American pastor who preaches the rapture, delivered the US embassy’s opening prayer after its relocation to Jerusalem. He said:

Jeffress, who has also said Jewish people were going to hell and that “Islam is wrong. It is a heresy from the pit of hell,”[8] was joined by Reverend John C. Hagee, a televangelist who has previously said that Hitler was part of God’s plan to return Jews to Israel.[9]

Pompeo is yet to comment on the re-emergence of the video.