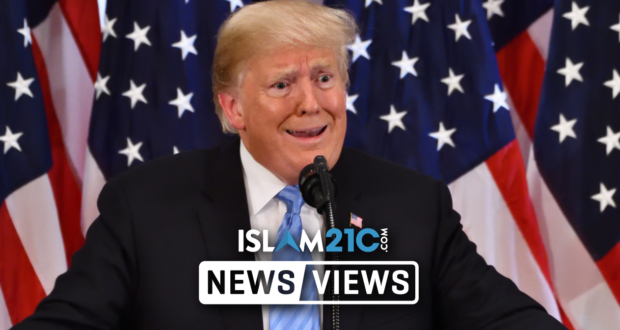 A London panel on Wednesday discussed US President Donald Trump’s proposed peace plan for Palestine and ‘Israel’, also known as the ‘deal of the century’, and whether it is viable for future peace in the region.

The session also looked at the role of Jared Kushner, Trump’s son-in-law and senior advisor, in piecing together the peace deal, his relationship with ‘Israeli’ Prime Minister Benjamin Netanyahu, and the geopolitical significance of Saudi Arabia and the United Arab Emirates in financing the agreement.

“I’m here today to say how important it is that we respond to the call for global solidarity for the Palestinian people and that we reject this deal, which is absolutely outrageous,” Lynn said.

“My view is that actually, this attempt to try to sell out the rights particularly of Palestinian refugees will not succeed”.

Lynn also believed there is a lot of work being done to undermine the global Palestinian solidarity movement due to the success of the Boycott, Divestment, and Sanctions (BDS) movement around the world. She said that more people are turning against what is happening to the Palestinian people as they are now understanding the true nature of the ‘Israeli’ government.

Furthermore, Law believed the proposed peace plan will further weaken any prospect of a future Palestinian state and a two-state solution as it will force Palestinians to give up the little land they do possess, and he warned that Kushner should not be underestimated.

According to Law, no political substance of the deal has been revealed as of yet, and only the economic details of the agreement have been put forth, which is to pump billions of dollars into the Palestinian Authority and supporting states without any specific plan as to how that money would be spent and on what projects it would be used on. He said that, essentially, the deal is an economic package intended to coerce the Palestinians into giving more of their land to ‘Israel’ with the support of the Arab states.

“I think the point to remember about Jared Kushner is don’t underestimate him. He’s very good at what he does, and what he wants to do thus far is to push the Palestinians into a corner from which they can only say no.”

Law also explained how Kushner has financial support and backing from the UAE and Saudi Arabia, specifically from Saudi Crown Prince Mohammed Bin Salman and Emirati Crown Prince Mohammed Bin Zayed, and why this is a difficult situation for the Palestinians, as the two main regional powers are supporting a plan that will essentially strip away their rights and representation as an independent people and state.

Kushner’s close relationship with Netanyahu and prominent right-wing Zionists was also analysed, as well as his past experience as a real estate agent in New York. This experience led Law to conclude that his plan for peace will not succeed among Palestinians as it will act as a catalyst for both the building of more illegal ‘Israeli’ settlements and the stripping away of more Palestinian land.

Regarding the geopolitical significance of Saudi Arabia and the UAE in supporting the agreement, Davies believes that the pledge of support from the two Gulf states is pivotal in defeating the prospect of a two-state solution and lasting peace in the region. He argued that Saudi support for the deal is in response to the growing tensions with Iran and that Bin Salman sees a common ally in ‘Israel’, as they share the same enemy.

As such, the proposed peace agreement is one such example of Saudi Arabia and other Gulf states establishing public relations with ‘Israel’ and opening up the prospect of increased cooperation with Tel Aviv that traverses both the political, economic, and even military aspect of international relations in the Middle East.

2019-07-04
Muhammad Mussa
Previous: Libya: Haftar’s forces kill over 40 migrants and injure 130
Next: Will Morsi’s Death Awaken our Voices against Injustice?