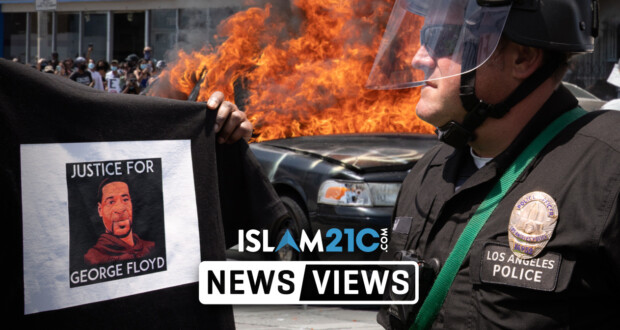 The ex-cop charged with George Floyd’s murder has been released on bail.

Derek Chauvin was released on Wednesday morning after posting a $1m (£770,000) bond.

The disgraced police officer was caught on bodycam earlier this year pressing his knee on George Floyd’s neck for almost nine minutes, ultimately causing his death. [1]

The murder of Floyd, along with the execution of Breonna Taylor in her own bed,[2] ignited global protests in support of the Black Lives Matter (BLM) movement.

Chauvin, charged with second-degree murder and manslaughter, was fired from his police department and awaits his court date in March 2021.

Chauvin was released on conditional bail, financed by a bail bond agency that has promised to pay US authorities the full amount should he fail to appear in court.[3]

Chauvin was released from custody at around 11:30 local time on Wednesday, according to the Hennepin County Sheriff’s Office.[4]

Three other ex-cops connected to the murder of George Floyd have also posted bail. J. Alexander Kueng, Thomas Lane, and Tau Thao were also fired from the police department and have been charged with aiding and abetting the murder of Floyd. The group are awaiting their trial next year.

Civil rights lawyer Ben Crump, who is representing Floyd’s family, said that Chauvin’s release on bail was a “painful reminder” that “we are still far from achieving justice for George.”

Crump also stated that the three ex-officers were clearly complicit as footage proved they were aware that Floyd had no pulse, and yet did not take any action to save his life.

“Although George Floyd was denied justice in life, we will not rest until he is afforded full justice in death,” Crump said.

A tragic list of at least 70 victims choked to death by US police[6] has made the phrase “I can’t breathe” a slogan for the BLM protests. [7]

Police brutality has become a well-documented phenomenon in the United States.[8] Chauvin’s release on bail coincided with the hospital discharge of Jacob Blake, another victim of excessive force after being shot in the back by police seven times as he was walking away. Blake had been in hospital care since the end of August, and will now begin rehabilitative work at a specialised spinal centre.

Blake’s kidneys, liver, small intestine, colon, and stomach were all severely damaged in the shooting, paralysing him from the waist down. [9]

The murder of George Floyd was the final straw in a string of police killings, resulting in global protests in support of the BLM movement.

The global BLM protests are calling for the reformation of the increasingly militarised US police and an end to the use of unjustified lethal force, particularly against blacks and ethnic minorities.