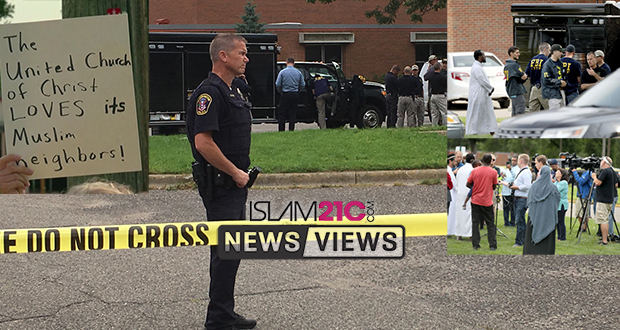 Social media users have pointed out what they have described as blatant Islamophobia and double standards by the ‘mainstream media’ after a mosque in Minnesota, United States was bombed in the early hours of Saturday morning during the Fajr prayer.

The Dar Al Farooq Islamic Centre in Bloomington, Minnesota was bombed at 5 a.m. local time (9 a.m. GMT). Asad Zaman, the Director of the Muslim American Society of Minnesota reported in a news conference that “A witness saw something being thrown at the Imam’s office window from a van or truck before the blast”.

Mohamed Omar, the Masjid’s executive directory added that the vehicle sped away immediately. This Masjid, like many other Masājid around the country, is said to have received threatening calls and emails. Unfortunately, such threats have become a common occurrence for many Muslims living as minorities in many parts of the world. Many social media users repeatedly blame, what they call the ‘demonising of Muslims’ as a key reason for these threats and even physical criminal attacks. [1]

The Council on American Islamic Relations (CAIR) offered a $10,000 reward for information leading to the arrest and conviction of the person or persons who reportedly bombed the Masjid. [2]

“We hope a reward will help law enforcement authorities quickly apprehend the perpetrator of this act of violence targeting an American house of worship,” said CAIR-MN (Minnesota chapter of CAIR) Civil Rights Director Amir Malik. “If a bias motive is proven, this attack would represent another in a long list of hate incidents targeting Islamic institutions nationwide in recent months.”

Since the beginning of the year, CAIR has reportedly called for investigations of what they call ‘possible bias motives’ for dozens of other incidents targeting mosques in Colorado, Florida, Ohio, Iowa, Kentucky, Georgia, Arizona, Tennessee, Virginia, New Jersey, New York, Maryland, Texas, and a number of other states. By comparison, in the January-March period in 2016, CAIR recorded 19 such incidents.

The incident is under investigation by the Federal Bureau of Investigation (FBI), which it says was caused by an “improvised explosive device”. [3]

Some social media users questioned as to why the US President Donald Trump is yet to respond to this “terrorist attack” that had targeted Muslims and their place of worship.

More than 24 hours later the Trump White House has said nothing about the terror bombing in Minnesota. Why not? https://t.co/GzKOuLslrU /4

Mark Follman, the National Affair Editor at Mother Jones highlighted: “More than 24 hours later the Trump White House has said nothing about the terror bombing in Minnesota. Why not?”

Another Social Media user with Twitter handle @Brown_Saraah wrote: “Someone bombed a mosque in Minnesota recently. You probably didn’t hear about this because mainstream media likes to demonize Muslims.” [4]

The Minnesota governor, Mark Dayton visited the Masjid on Sunday and described the bombing as a “criminal act of terrorism” and that it is an “unthinkable, unforgiveable” hate crime. He said: “What a terrible, dastardly, cowardly act was committed,”

The US Department of Homeland Security for its part on Saturday released a statement saying that it “fully supports the rights of all to freely and safely worship the faith of their choosing and we vigorously condemn such attacks on any religious institution”.

In a report released by the Southern Poverty Law Center (SPLC) earlier this year, it had been denoted that the number of hate groups specifically targeting Muslims in the US has almost tripled in the past year. The SPLC has attributed the dramatic spike to Donald Trump’s campaign. [5]

Others have pointed out that there is yet to be the global condemnation, dramatic news coverage, arrests or other similar reactions to this ‘act of terrorism’ as it is usually observed with other acts of ‘terrorism’ suspected to be committed by those of a Muslim or non-White decent.