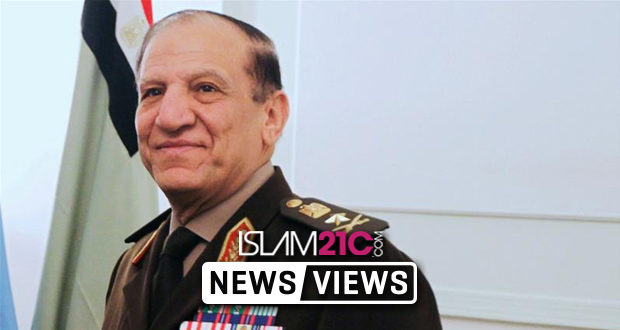 Egyptian security forces on Tuesday arrested former Chief of Staff Lieutenant General Sami Anan on grounds of his announcement to run as a candidate for the presidential race, according to his campaign coordinator Mahmoud Rif’at.

“O great People of Egypt, Sami Anan was arrested by Sisi and his gang,”[1] he tweeted today.

This came soon after the Egyptian army claimed that the announcement of Anan’s candidacy for the presidential race constitutes explicit incitement against the armed forces “in order to cause a break between them and the people.”

The General Command of the Armed Forces summoned Anan to investigate him for “irregularities” related to his announcement to run for the presidential elections in March. It went on to accuse Anan of “forgery in the official press,” and the termination of his service in the armed forces which “illegally facilitated his candidacy without right”. Nothing of the General Command’s statement mentioned that the current ‘President’, al-Sisi who seems keen on running the presidential ‘race’ alone illegally deposed Egypt’s first elected president, Mohamed Morsi.

“To uphold the principle of the rule of law as the basis of governance in the state, all legal procedures must be taken against the irregularities and crimes, bringing them before the relevant investigative bodies,” the statement said.

He justified his decision to stand on grounds of the deteriorating situation in Egypt which he said is getting worse day after day, owing to policies that leave the armed forces to administer the country alone, without enabling the private sector and civil society in general to play its role in running the affairs of the state.[2]

Earlier this month, a leaked audio conversation between the secret service agent Captain Ashraf al-Kholi and the prominent TV host Azmi Megahed, broadcast by the Turkish-based Arabic television channel Mekameleen, revealed the military’s plan to smear another of Sisi’s presidential race competitors, Ahmad Shafiq, if ‘he steps out of line’ and decides to run. Shafiq, an ex-air force commander and former aviation minister in the Mubarak era pulled out of the race.[3]