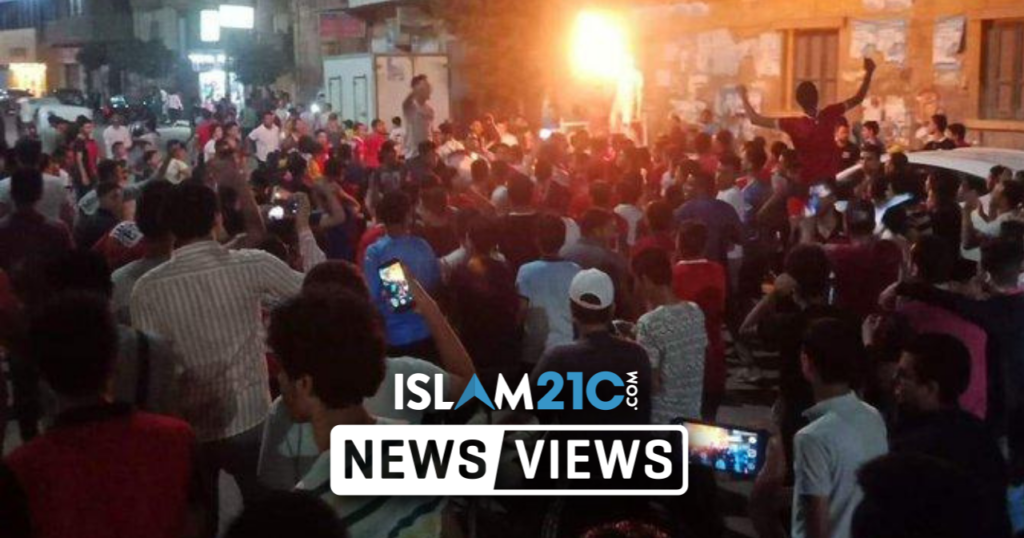 Thousands of Egyptians have taken to the streets in a rare show of public disapproval towards the coup president Abdel Fattah el-Sisi. The protests, mostly led by young people, are reported to have taken place in at least eight cities, with Cairo, Alexandria, and Suez heading the largest crowds. [1]

According to several media reports, security forces in Egypt clashed with hundreds of protesters in the port city of Suez. Security forces fired tear gas and live rounds in an attempt to disperse the large crowds. [2]

Security forces in Suez, historically a bastion of resistance in #Egypt forcibly disperse pro-democracy protesters in the centre of the city.

The unrest on Saturday came just one day after thousands of people took to the streets in several cities across the country demanding that el-Sisi resign. The rare show of dissent against the coup president is significant, since the Sisi regime has cracked down on dissent, jailing thousands and banning protests across the country.

On Friday, demonstrators gathered in Cairo’s Tahrir Square chanting “the people demand the fall of the regime” and “leave Sisi.” These slogans echo the chants that were called in the exact same place that took down longtime dictator Hosni Mubarak more than eight years ago.

Meanwhile, Sisi headed to America to attend the United Nations General Assembly (UNGA). “Rise up, fear not, Sisi must go” was echoed in the streets of Alexandria, while in the port city of Damietta, a large poster of the former general-turned-president was torn down.

The coup president is responsible for massacres through his illegal coup and his military war waged fully on the Egyptian populace. Sisi’s forces bloodily purged the two squares, Rabaa al-Adawiya and al-Nahda, where thousands of people were massacred and their corpses burnt.

Tens of thousands of innocent protestors had gathered in the two squares supporting their first elected president, Mohamed Morsi, knowing it would be overlooked by the scorching anti-Islamic sentiment conjured throughout Morsi’s short term in office. The massacre in Rabaa al-Adawiya Square was the bloodiest mass killing of unarmed civilians in Egypt’s recent history, and indeed the world.

According to the executive director of Human Rights Watch, Kenneth Roth, Sisi’s forces “carried out one of the world’s largest killings of demonstrators in a single day in recent history.” [3]

Members of the Egyptian army, loyal to the illegal coup ringleader Abdel Fattah el-Sisi, are also responsible for exterminating unarmed civilians in Sinai. In April 2017, Amnesty International documented several of the Egyptian army’s extra-judicial field executions in North Sinai. [4] These documented executions are thought to be only a glimpse into the bleak collection of criminality with impunity by soldiers of this ruthless regime, under the guise of ‘fighting terrorism’. [5]

Around 200 people in Suez marched to the city’s downtown area for the second night in a row, according to the AFP news agency. The demonstrators were met by Egyptian security forces and armoured vehicles. One protester told AFP:

“They [security forces] fired tear gas, rubber and live bullets and there were injuries.”

“My nose started burning up. The smell was seeping through the balcony. I also saw some youth run and hide in our street”

Protests have also reportedly taken place in Giza and in the northern town of Mahalla. However, a strong military presence was sustained in Cairo’s Tahrir Square, known as the epicentre of Egypt’s 2011 revolution and responsible for the removal of former president Hosni Mubarak.